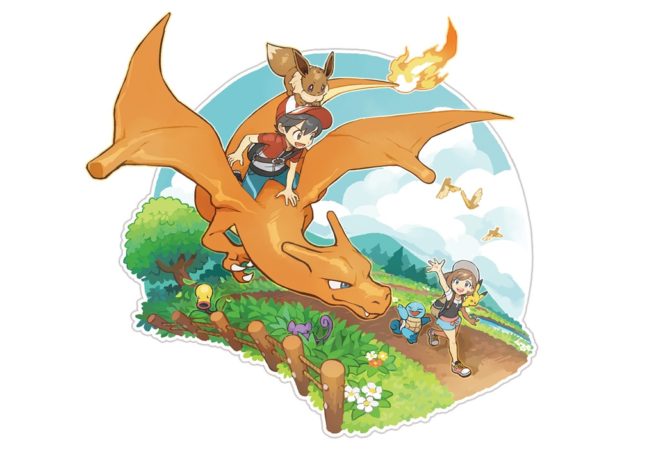 In this week’s issue of Famitsu, the Japanese magazine has a lengthy interview for Pokemon: Let’s Go, Pikachu / Eevee. Director Junichi Masuda was brought in to discuss the new Switch entry in the franchise.

Masuda spoke about the game’s graphics, making changes to core aspects of the series (like removing wild battles which was debated internally), the decision to use mechanics from Pokemon GO, and more. We also have the full comments on Masuda speaking about the 2019 title, which we reported on earlier in the week.

So, you’ve already discussed this in a variety of places, but could you tell us about how you developed the concept of the two games?

Masuda: With the success of Pokemon GO, the Pokemon franchise’s impact on people has increased greatly on a global scale. However, despite the fact that Pokemon GO events bring in a lot of trainers, not all of those people experience the rest of the Pokemon series. On the other hand, players who have enjoyed the mainline Pokemon games up until now may not necessarily be playing Pokemon GO. So, naturally, the driving force behind the development of Let’s Go, Pikachu and Let’s Go, Eevee was bringing those two groups of people together in some way. Our approach could be best summarized by saying that our goal was to make “a Pokemon game for everyone!”

Pokemon GO can’t be played without some kind of smart device, right?

Masuda: That’s right; for example, there are a lot of kids out there that don’t have smartphones yet who can’t experience Pokemon GO. We basically made this game to allow people who might not have access to Pokemon GO to enjoy a Pokemon GO-ésque experience. Of course, this also presents an opportunity for parents to enjoy the franchise with their kids!

This kind of game does certainly seem like it’d be optimal for parents and their children to play together.

Masuda: Right, for example, let’s say a parent and child go out to play Pokemon GO together. After they come home they can bring the Pokemon they caught in Pokemon GO over to the two Let’s Go games and continue playing together on the living room TV! That’s the kind of natural blend between Pokemon and the flow of everyday life that we considered over the course of the games’ development. It isn’t just about the experience of throwing a Pokeball but being able to play and experience Pokemon as a part of everyday life – I really wanted both fans of the mainline series and fans of Pokemon GO to be able to get a taste of that. Again – to put it frankly – we wanted to make a Pokemon game that all fans could enjoy.

So, in attempting to implement that kind of gameplay, what kind of challenges did you face?

Masuda: Well, we had to update the graphics without making them too realistic – we wanted to maintain the game’s fantastical elements, so as not to surprise any parents who may be watching, for example. For instance, we pictured a child playing the game in the living room while their mother watches from the kitchen; it needed to seem like the kind of game that would give her peace of mind. We based the sound design off of a similar philosophy. We were particularly conscious of the need to express a sense of gentleness and ease throughout the games’ world, so we primarily utilized classical instruments. Personally, though, I’m quite the fan of fast-paced techno music… (laughs) Which reminds me, I’m actually not in charge of the music – that would be Mr. Kageyama (Shota Kageyama). Rather than having a specific direction that he composes the music in accordance to, he primarily focused on what he feels would be comfortable for players to listen to while playing the game. As for the actual hardware aspect of the games’ sound design, the number of things we’re capable of musically have increased dramatically. We’re capable of more technically, so much so that we think players will be able to “feel” the music on a more profound level than before, so please look forward to it!

A life where Pokemon always has a presence… Even just thinking about it is exciting!

Masuda: We created the two-player mechanic with that blend of Pokemon and everyday life in mind, as well! It isn’t limited to parents and their children of course – siblings, friends, significant others… a whole host of people will be able to play together!

Challenging the Fixed Concept of Pokemon

“The widescale reform of the Pokemon series – has Mr. Masuda made it possible!?”

Beginning with the actual capturing mechanics, you seem to be utilizing many of Pokemon GO’s mechanics in a variety of places. What do you aim to accomplish through this?

Masuda: We’re incorporating the best mechanics from both the core games and Pokemon GO, so that way both groups of players can enjoy a fresh experience! Although it seems like the games are based around Pokemon: Yellow Version, there are elements of Pokemon GO as well; we tried to find a happy medium between the interesting features of both games and ended up pursuing what you see now!

Incorporating elements from Pokemon GO is quite ground-breaking; it must’ve taken a lot of courage to make that kind of decision.

Masuda: It was a daunting task we took upon ourselves, for sure. There was considerable debate within the team concerning the absence of wild Pokemon battles. Up until this point I had been steadfast in defending the mechanic as the series director; this time, though, I felt like we should try to change things up a bit. Personally, I’ve always felt that the weakening and capturing mechanic is a bit like fishing – there are people that aren’t fans of that kind of strategy, though. To that end – as I mentioned before – I wanted to make these games more enjoyable for a wider audience of fans. As such, we simplified the mechanics. Until now, catching Pokemon has been vaguely reminiscent of fishing, whereas I’d liken the new mechanic to catching bugs with a net. I have to wonder if people will enjoy that sort of straightforward mechanic more so than the previous mechanic.

Changing something so fundamental as the capturing mechanic would be difficult for somebody who isn’t you, Mr. Masuda, wouldn’t it? None of the younger staff could decide something so bold as that, I’d imagine… (laughs)

Masuda: There are certainly plenty of other mechanics that’d be difficult to change, I’d guess. (laughs) But if we as developers don’t actively confront those kinds of challenges, the series’ gameplay would become fixed and stale, wouldn’t it? So, to prevent that staleness, I’d like to keep proposing new ways of play without any reservations. Of course, there will be those that aren’t satisfied with the changes, but even so the driving idea behind these games is that they’re for everybody to enjoy. Given that philosophy, I will do my best to make sure that future games will reflect the feedback we receive – both good and bad.

Obviously the gameplay is significantly new, but as a whole, can you tell us how the story has changed?

Masuda: In remaking a 20-year old product, the hardware is completely different, and the graphics and sound have evolved to a completely different caliber; the story, however, hasn’t really changed all that much. Players will notice a few additional elements here and there, though. For example, now that I think back on Pokemon: Yellow Version, there are some instances where it might be difficult to figure out where to go next, or where the next objective is. In this game, by contrast, there are a few supplementary features that make the game a bit easier to play.

It seems like it might be easier for even first-timers to progress through the game. How about battles and training Pokemon? Are they much different?

Masuda: When it comes to training Pokemon, you can still level up by catching Pokemon and through trainer battles; additionally, you can send caught Pokemon to the Professor to receive candies that you can use to directly enhance your Pokemon’s strength. I thought about implementing training in a variety of ways, but when it came down to it, utilizing Pokemon GO’s system seemed to be the simplest and most comprehensible. Regarding battles, we changed the UI a bit, but the logistics of the battles themselves are largely the same. I really want those who have stuck with the Pokemon franchise since its early days to be able to recall their experiences playing Pokemon: Yellow Version.

The way you’ve simplified certain areas of the gameplay makes it seem like the game will be fun for all types of players! Was having wild Pokemon appear on the map itself also a product of seeking a higher level of user-friendliness?

Masuda: I didn’t really consider it at first, but the more I thought about catching Pokemon as catching bugs in a net, I decided to implement a system in which you could decide to catch a certain Pokemon after seeing it from a distance. In order to cultivate that sense of realism, I decided to have them viewable on the map.

I see, I see. Having every single Pokemon have a moving animation would be an immense workload though, wouldn’t it?

Masuda: That was definitely the case. (laughs) The programmers who were in charge of that did a great job, though, so I think it was the right decision. Walking, stopping, and even just looking around idly – each Pokemon has animations characteristic to themselves.

That’ll definitely strengthen the bond between you and your partners, too – this seems like the kind of game that you could easily get lost in by just watching each Pokemon’s behavior.

Masuda: The Pokemon you can see in the field are incredibly lively, too! Just watching the Pokemon is great in and of itself, but I feel like it’s also nice to finally be able to see a Pokemon, think to yourself “I’m going to catch that!” and just do it.

Speaking of map encounters, in the footage that was shown off during the Nintendo Treehouse: Live presentation at E3 2018, you could see Pokemon on the map that had both red and blue auras surrounding them. What exactly do those auras mean?

When Pokemon GO was first released, some were discussing how size might affect the strength of the Pokemon itself… What do you have to say about that?

Masuda: That isn’t the case. (laughs) Size is one of the elements from Pokemon GO that I definitely wanted to include in these games. For example, it’s handy to be able to remember things like, “Oh, the Pokemon I caught in that particular area was big!” If, by chance, all the Psyduck you catch in a particular area are big, you could imagine something like “that place must be abundant in nutrients,” or something like that. In that way, if there’s one Pokemon that really just sticks with you, there are even multiple varieties of that for you to catch!

Nowadays, it seems that people perceive Pokemon as more than just game characters, don’t you think?

Masuda: In the past I avoided putting things like clothing on Pikachu, mostly because people might have been confused as to what were clothes and what was its body. Machamp, by the way, isn’t wearing pants – that’s his body. (laughs) These days, even if Pikachu is wearing clothes, people can still perfectly recognize that it’s Pikachu, and I really appreciate that!