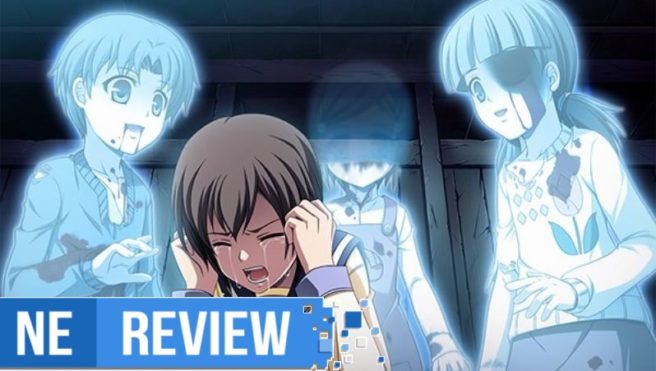 Halloween is around the corner ladies and gentlemen, and as far as I’m concerned, there’s no better way (or game) to get you in the spirit of all things creepy and dead than Corpse Party. A series that I love dearly is finally making its way over to 3DS for the western audience to enjoy, and it brings along extra chapters not before seen in any of the previous ports and iterations.

While Corpse Party may be a new name to some, the game has actually been around for a lot longer than most think, even long before it’s debut on PSP back in 2010, which gained the series traction. The only game in the series we have yet to receive in the west, unfortunately, is Sachiko’s Game of Love – a silly spin-off title that has more of a romance-influenced storyline and a bit more light-hearted, while of course remaining gruesome in true Corpse Party fashion. The game originally made its debut way back in 1996, making this year its 20th anniversary. So after multiple remakes of the original title – including a horrendously bad Steam release back in April of this year – how does the 3DS version fare now that it’s finally here?

On a night after school celebrating a culture festival, you and your classmates gather around and tell each other ghost stories while saying goodbye to Mayu, a fellow classmate, who’s transferring the following day. As a token of appreciation and dedication to their friendship, class rep Ayumi suggests doing the Sachiko Ever After charm, which is performed simply by repeating a certain phrase nine times, followed by everyone simultaneously ripping a piece of paper shaped much like a stick figure. After this occurs, however, the ground starts to shake vigorously, causing the floor beneath them to collapse and all of them to fall into a void. 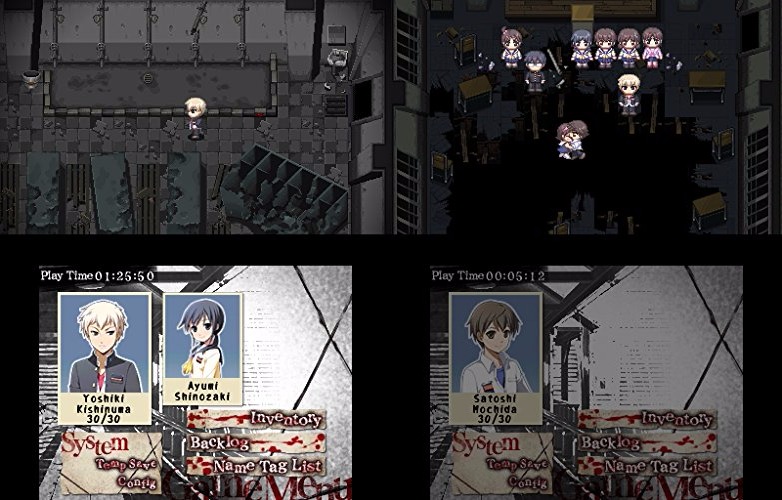 It is here where you transition from being at your school to Heavenly Host Elementary – a school that was taken down many years ago due to gruesome murders that took place, and also the grounds for where your current high school stands. Corpse Party is a series that has held such uniqueness in the realm of visual novels by sticking out with gameplay elements allowing you to go through Heavenly Host at your own accord and solving puzzles in the interim while trying to survive and get all your classmates out of the dreadful hell you’ve been put into. The design of the school is big while remaining memorable with lots of landmarks and times where you’ll frequently have to go back to where you previously were, forcing you to remember the layout of the entire place.

Unlike most other visual novels, do expect to die plenty. This is a natural way of playing the game, and it’s not as bad as it may seem as you’ll quickly find that all deaths are unique to each character (whether accidental or purposely), and they’re done with such detail in both writing and art that you’ll end up finding yourself more intrigued if anything. Since the game has many puzzle elements, dying in particular sections also helps teach you how to better solve the problem the next time around, though I would recommend saving frequently as the game will pick up from your last save file and not a checkpoint system. The 3DS version of the game has a few save files for you to play around with in case you wanted to save at certain points or chapters for each one, either for collection purposes (you’ll mainly be collecting nametags from deceased students and various art from the game), or to simply revisit or have a “safe zone” for you to come back to in case you wanted to go about a certain route a different way. Saving is done by candles you’ll find placed sporadically throughout Heavenly Host. While sometimes they may feel hard to find, they’re reasonably placed once you get the hang of the layout of the school and can work your way around. 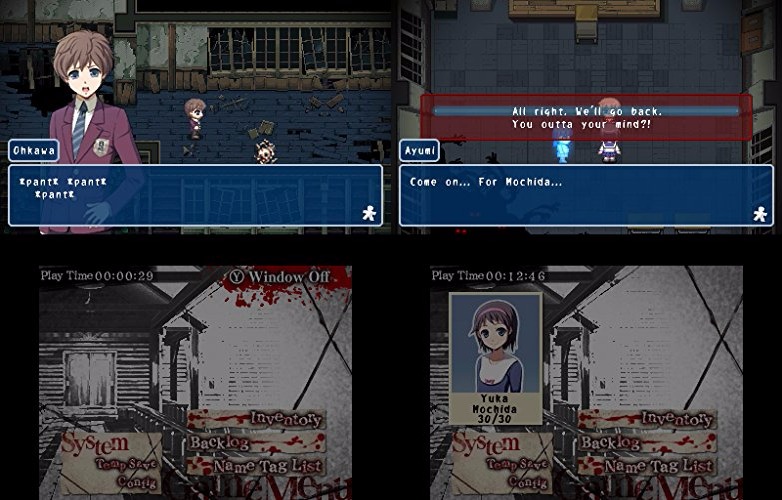 Thankfully, even though some sections may be tedious or difficult, the game itself paces itself well and doesn’t drag out too long. It averages out to around 10-14 hours if you’re simply focusing on story. That four hour gap mainly is based off of one’s proficiency in navigation and puzzle solving. You’d be looking at about 16-20 hours if you were to get all art, nametags, and endings, fully completing the game. Play this baby about 3-4 hours a night and before bed and you’re looking at the best Halloween weekend game out at the moment.

Mechanics and gameplay are virtually identical to Corpse Party’s other ports. What the 3DS version delivers, besides its extra chapters, is a bit more information that is all laid out on the touch screen. I suppose it’s nice to not need to press start and simply have everything there visible and one tap away, but you still won’t be looking at it much unless you need to open your inventory or repeat some past dialogue you may have missed. Corpse Party on 3DS also has no stereoscopic 3D implemented unless it cuts to an art piece, so if you’re one of those that like to play their 3DS games with the 3D on full blast where applicable, don’t bother doing so here. The little 3D that there is still doesn’t offer much, and makes me question why it was even implemented to begin with since art doesn’t come as frequently as one would like it to, given how great it is. 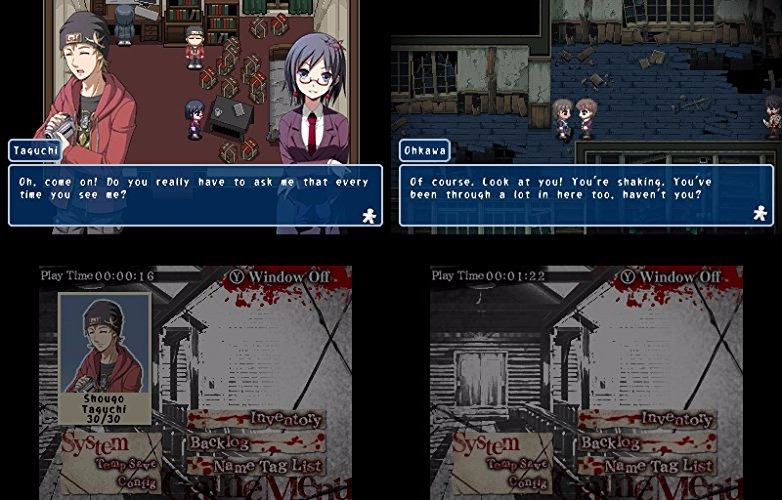 Everything Corpse Party delivers is ominous from top to bottom, never lifting the eerie atmosphere until you’re finished with the game. The music helps set the tone a lot, and as if that wasn’t enough, all sound effects and audio cues are sinister and presented in a way that’s never easy to get over – whether you’re picking up items, entering a new room, opening a door, hear kids laughing in the distance, or running away from an angry spirit. It’s impressive that its 16-bit style graphics can still exude such fear, more than likely due to the fact that you have to use your imagination a little bit, making things seem scarier than they appear to be. As a horror junkie long before I got into the Corpse Party series years ago, it made me very happy to see all the detail that went into crafting the universe, and how nothing was held back creatively. If you’re a fellow horror fan that has yet to play Corpse Party, expect a lot to discover and love.

While those who have played the original on PSP won’t have much to look forward to – even with the new chapter in the 3DS version – Corpse Party is still a fantastic title that will serve well for newcomers and those that weren’t able to get it on PSP or don’t have a Vita to download it on. What’s made Corpse Party so great and why it sticks out from other visual novels and horror games is the gameplay elements that keep you hooked, as a well as an intense and truly unsettling story with great character development that makes you feel right in there with the rest of the cast. It’s hard to put down as you’re constantly wanting to know what will happen next and how it’ll all end, and while you’ll get hit with many Wrong Ends, which is totally normal, it’s impressive to see how detailed some of the deaths are, whether they be accidental or story-related, and the art for Corpse Party certainly brings it to life even further. The voice acting and emotions throughout feel genuine, and you’ll easily find yourself heartbroken over some sections just as some of the cast are with its captivating atmosphere, simple yet engaging gameplay, and great narrative from beginning to end. If you’re a fan of the horror genre or have always wanted to get into visual novels but didn’t know where to start, give Corpse Party a shot. You have absolutely no reason not to – you even get a cute figure of Seiko and Naomi as well as a soundtrack with the Back to School Edition. What’s not to love?