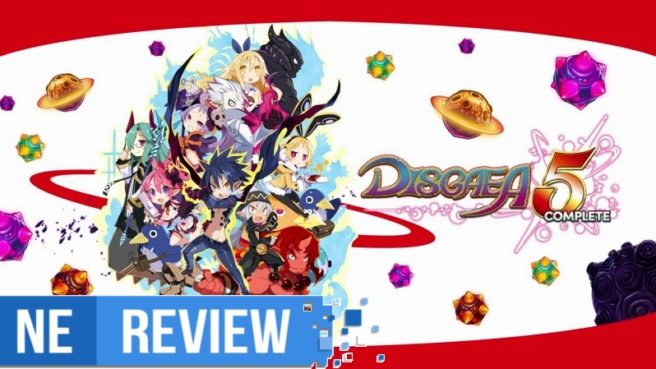 Since its initial launch in 2003, Disgaea has been a flagship series for Nippon Ichi Software – even using Prinny as a mascot – and continues to be nearly 15 years later, having multiple spinoffs and branching off into other mediums such as anime adaptations and manga. What’s made the franchise so great and successful over the years is that not only has it touched multiple platforms on both console and handhelds, but it’s had fun and engaging gameplay that goes beyond the typical layout and flow of a strategy RPG, bringing along a great cast of characters, settings, art, and music to boost. Now Disgaea 5 Complete is making the series’ return to Nintendo consoles on the Switch for the first time since Disgaea DS back in 2008, and packs in all DLC from the original release. Despite the game itself being nearly two years old at this point, it offers those who have held out or simply never jumped into a Disgaea game before a chance to give it a shot. And even though Disgaea isn’t always associated with Nintendo, Disgaea 5 Complete feels comfortable and right at home on Switch, giving RPG and SRPG enthusiasts alike a great new title to get their hands on and delve into.

Although you’ll technically be controlling multiple people on the battlefield, Disgaea 5 Complete focuses mostly on Killia, a demon looking to get revenge on the Demon Emperor Void Dark. The central theme here is revenge, so not only is Killia looking to get revenge for an unknown reason in which you’ll find out later on, but many characters you meet along the way have a quarrel with Void Dark as well and would like to exact revenge. While everyone may not see eye to eye as you go on your journey, the end goal is the same, so many allies are gained along the way due to the common goal.

Each character is unique and has a great set of dialogue that makes them feel unique with personalities to match. Conversations are handled well enough that even if you were playing with the sound off you’d get a good idea of what they’d sound and act like. It’s a nice trait characters in Disgaea 5 have, and through this you’ll find a deeper investment into the characters and random NPCs you’ll meet in hub worlds – even simple stuff like quest givers, shop owners, and more – making it easier to remember who’s who, what they offer, among other things. 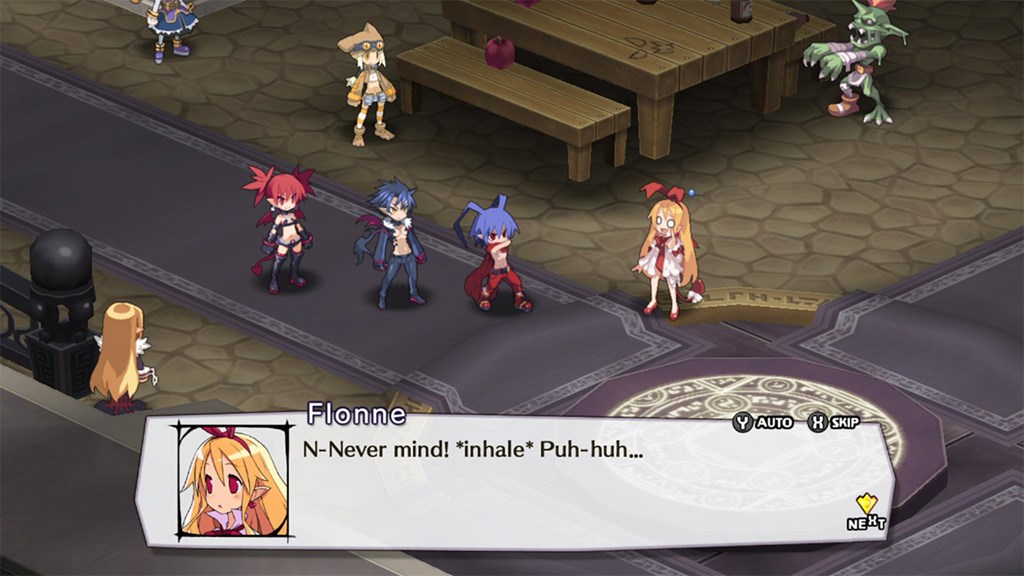 While rated T for Teen, I found myself having to look back to make sure if the game was rated M instead mainly due to the amount of expletives and adult jokes made in the game. Personally, I thought this brought characters to life even more with an added layer of depth, as the strong language wasn’t just used for the sake of using it, but in matters where if one was to be in that position, they’d probably retort or react the same way. The humor is also great and well-timed, but once again this is something that would be more appreciated by adults rather than a younger gamer. It’s a heavy Teen rating, and while it doesn’t bother me or majority of those that play niche Japanese titles, those who are more sensitive may want to keep this in mind.

For those familiar with strategy RPGs but unfamiliar with Disgaea, there’s a lot that will remain comfortable about the gameplay and the way it plays out. However, Disgaea also takes new mechanics into account such as the ability to spawn as many or as few units onto the battlefield as the player sees fit and being able to throw other units so they travel farther. A Revenge Gauge is also included that essentially makes characters activate an ultimate mode where all their moves cost very little special points (SP), damage taken is reduced by 25%, and much more. These mechanics add a whole other level of strategy to the genre by utilizing team formations, testing out the waters in a certain section of map, targeting specific enemies over others and lots of other things that’s left to the player to decide. 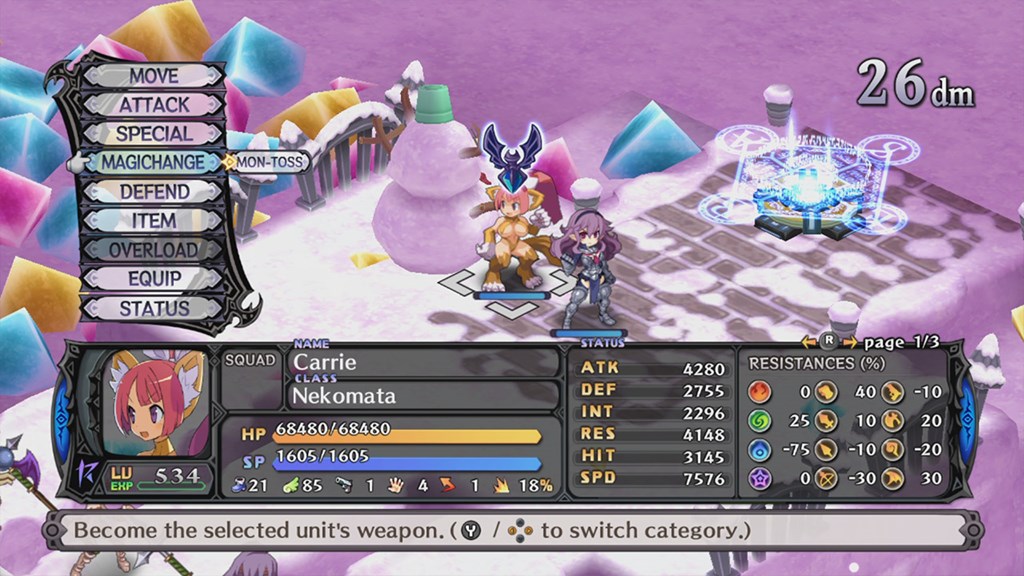 Prinnies, which are the Penguin-like race featured throughout the Disgaea series, will make the bulk of your units, allowing them to be thrown, which then explode on impact. They can also change into an enhanced weapon that can be used by non-Prinny classes known as Magichange, and can just act as a normal unit for attacking or maybe taking the blunt force of an attack so a more important character doesn’t suffer. They’re meant to be disposable, but are extremely useful in many situations to have, so it’s good to have a nice balance of them as well as other classes you can create from your hub world as well.

Players can create their own characters and assign classes and weapons they obtain during battle or have bought in the shops, then can use those created characters in battle to help out. All classes have a unique ability and, depending on how you play, can be customized in any way you like to help serve your best interest as you go through the game. It’s a nice way to make a unique playthrough for everyone that picks it up, and gives another level of investment into the game. It’s extremely easy to do, even though it may look complicated, and players can assign any name they like as well, while adding buffs and passive abilities to weapons and their personalities.

There’s no permadeath that Disgaea gives or anything of the sort, though you can change with units you’d like to take with you into battle or leave behind back at the hub. If any of your characters face an unfortunate demise, there’s a hospital that’s offered at the hub in which you can heal and revive your units for a fee, but Disgaea adds a little mini-game and reward system to this as well. As your units regain health, you’ll be offered a currency based off of how many health points you’ve restored which you can then spend on items, some unique and some not. Most will be listed as ‘????’ until you’ve acquired the necessary amount of HP, SP, or Revivals – or any combination of the sort – where you can then unlock them by simply selecting them. The currency won’t be “spent”, and will just collect your overall HP, SP, and Revivals instead. I rather like this, because even though you will more than likely die from time to time as enemies and strategies shift and get tougher, I found myself not getting as upset as I would have because death still rewards you in some way, so not all is bad. 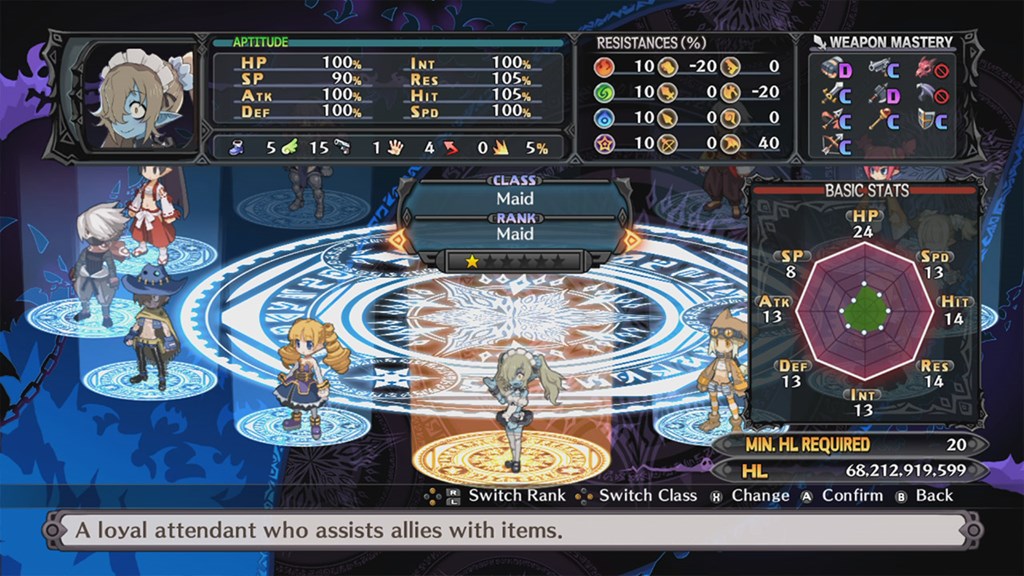 Disgaea 5 Complete has so much to love about it, especially for those that love a good strategy RPG. Though the game takes a little time to get going and a lot of battles feel almost like filler, between the cut-scenes which are both in-game and animated, the awesome music, and huge amount of content the game has to offer within the hub and beyond, those looking to invest time into it will find a fantastic RPG here. The main storyline – if you’re just focusing on that – will probably take you around 40 hours, but completionists looking to squeeze out every last drop and get all trophies on top of it should expect well over 100 hours of game time to sink into. The game gets even larger by allowing a map editor, in which you can create your own maps to play in and share them with the world. You can also jump into other players’ maps, too. Gamers unfamiliar with Disgaea and looking to jump into it for the first time can expect a quality title to be pleasantly surprised by. There’s a lot more content here than it may lead, and the demo offered in the eShop barely scratches the surface of the entirety of Disgaea 5 Complete that does feel, well, Complete.

While Disgaea 5 is technically a year old even with its new arrival on Switch, it has never felt more at home. Nippon Ichi Software’s long-running series of strategy RPGs have had a growing fan-base over the last decade and a half that will only grow larger with its arrival on Nintendo’s console, and will certainly please fans of the genre as well as recruit players looking to jump into something new. With a great cast of characters that are memorable, an awesome unique art style, and fun gameplay to boot that switches things up and goes above and beyond the typical SRPG mechanics, there’s a lot to love and appreciate in Disgaea 5 Complete. It runs smooth as can be, looks gorgeous both on and off TV, and is great for both short and long bursts, fitting into just about anyone’s schedule.

Disgaea 5 Complete review copy provided by NIS America for the purposes of this review.