[Review] Return to PopoloCrois: A Story of Seasons Fairytale 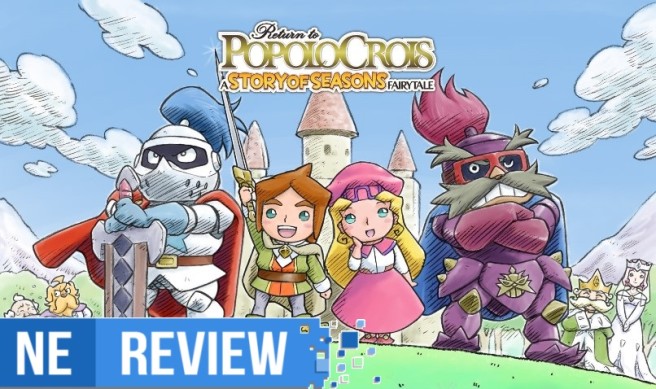 Despite what the name might suggest, very little of the game actually takes place in PopoloCrois. Instead, players have to help the heroic Prince Pietro return to his home kingdom after he finds himself transported to the neighbouring world of Galariland. What should be a peaceful kingdom is overrun with darkness, with the fields looking more like tar pits and people being transformed into dangerous Black Beasts. It’s up to Pietro and a rotating cast of characters both old and new to bring light back to Galariland and revive the farms that litter the countryside. The plot is very predictable, but has its moments – mostly when familiar PopoloCrois characters like the White Knight and Gamigami Devil return to the adventure. Unfortunately, a lot of the game focuses on a pair of new characters who aren’t all that interesting. It’s very clearly not Pietro’s story, but at least the romance between the prince and Narcia the witch is still cute. If there’s one area Return to PopoloCrois excels in it’s giving players warm and fuzzy feelings, with a localisation that brings out the characters’ charm. This is a game where the local NPCs turn to cheerfully greet you before you even hit the A button, after all. 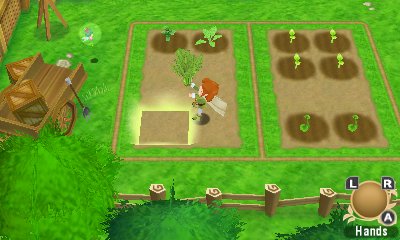 My main problem with Return to PopoloCrois is that the elements it borrows from the Story of Seasons series feel like an afterthought; it’s a brand name they only used to sell a PopoloCrois game in 2015. Pietro takes up the farming life early on in the game and gradually gains access to new farms that each accomodate different crops. The controls for planting and picking produce are a bit awkward, but it becomes more manageable once your equipment is upgraded and Pietro can plow several plots of land at a time. Unlike Story of Seasons, there’s no time management. Your crops grow as you play the game, but even if you get a pop up message informing you that the tomatoes need watering, there’s no need to worry about them withering up and dying. Similarly, you can keep animals like chickens and cattle for their eggs and milk, but they won’t breed or get eaten by your wolf buddy. It’s Story of Seasons with no real risk and no real reward. The money earned from fighting random battles quickly becomes more than your agricultural income, so there’s no need to actually grow anything unless you’ve got a serious green thumb. Even if you really get into the item crafting system, which requires recipes earned from exploring boring side dungeons, items from stores are affordable and just as effective as the ones made from your crops. The only use I found for my produce was giving it as gifts to the five Galariland girls Pietro can “befriend”. It wouldn’t be a Story of Seasons game without some sort of dating, but this aspect seemed particularly tacked on since these side characters aren’t really developed at all and dangit Pietro, Narcia is right there! Can’t you turn around and give her a turnip once in a while?

While the Story of Seasons side of Return to PopoloCrois might not play much like its namesake, the typical gameplay from the PopoloCrois titles is very much present. While running through the field with your four-person party, you’ll often find yourself thrown into random encounters against enemy monsters. Here battles play out like a simpler version of Trails in the Sky or Neptunia (although PopoloCrois’s battle system predates both those titles). Characters take turns moving on a grid and can either spend MP to pull off special moves or just run up to enemies and whack them. Battles are quick, but they don’t make use of the mechanics enough. Many of the skills affect a set radius, but most of the toughest fights are against only a single enemy so they tend to boil down to buffing everyone, using your default attack command and healing occasionally. Similarly, characters can pair up to perform different skills; this should make players give some thought to what party members to bring into battle, but there are only a few sections where you can even swap characters in and out. It’s all a bit too simple, with no interesting character progression systems or much in the way of challenge unless you crank up the difficulty.

The exploration is also overly simplistic. Dungeons lack puzzles or any sort of gimmick to mix up running through hallways and taking on random encounters. One early dungeon has Pietro shrinking down to the size of an ant to investigate a field of crops. It’s a cute idea, but the novelty wears off when it turns out that most of the dungeons look identical. There’s a lot of repetition in Return to PopoloCrois. For almost every section of Galariland, Pietro and company have to follow the same cycle of tracking down a magical object and clearing out the darkness from each plot of land in the region by exploring these short “field dungeons”. After that, they progress to a longer but not necessarily more complex maze before taking down one of the dark lord Gryphot’s servants (who are all palette swaps). There are some endearing events between all that, but it’s a loop that feels more like busywork than an adventure. 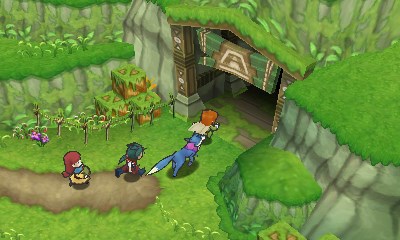 The art style of the original manga is adapted fairly well to 3D graphics (although the characters’ eyes still creep me out). None of the designs of the new characters or enemies stood out to me, but the environments are nice and colourful. The rustic feel of the setting comes through effectively in the both the visuals and the audio. The music makes use of an odd mix of guitar twang and synth noodling, which lends it a unique character. There’s a few repetitive songs that I found grating, but they were mostly tracks that were reused from the original PopoloCrois. Also returning from the original is the voicework. Return to PopoloCrois actually has two slightly different Japanese voice tracks: one with the original voice actors for Pietro and Narcia and another with more modern casting. Of course, you can play it in English too and I didn’t have any issues with the dub.

Return to PopoloCrois isn’t a long game my any means – it only took me fifteen hours to finish the main story. That said, there’s still a fair bit to do after the credits roll with a hundred (mostly fetch) quests to complete. My list of recipes and items was also looking very empty by the end of the game, so dedicated players will find plenty to collect. All of the side stuff is tedious, but in a good way. There’s something oddly relaxing about catching bugs and mining for gems just by running up to points on the field and the friendly presentation of the game makes me want to spend more time with this setting even if it is ultimately unfulfilling. Return to PopoloCrois excels at being JRPG comfort food, with competent mechanics and an endearing cast. Despite all the darkness in Galariland, the game keeps an uplifting tone that keeps it from being a completely forgettable fairytale. 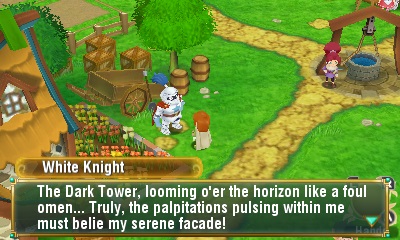 It’s a thumbs down if you’re after an in-depth farming simulation, but Return to PopoloCrois: A Story of Seasons Fairytale does a decent job of continuing the other series that makes up its mouthful of a title. PopoloCrois is a bit too basic when compared to even the other kid-friendly RPGs on the 3DS, both in terms of story and gameplay. It’s the kind of game that desperately needed a hook to be brought back on modern platforms, but the Story of Seasons stuff isn’t it. Even with the farming playing into the story, the agricultural aspects are so scaled back that the two halves don’t complement each other particularly well. That said, there are a bunch of quality-of-life features like the ability to fast-travel, view hints on where to go and tweak the difficulty at just about any point that make it more accessible than earlier PopoloCrois titles. It’s a good place to jump into the world if you’re curious about the series (though it’s not like you have many English options). Return to PopoloCrois is a simple but satisfying RPG that might find a niche thanks to its warm tone and stress-free farming. It’s charming, but rarely challenging.