Posted on September 5, 2020 by Dennis(@LyonHart_) in Reviews, Switch 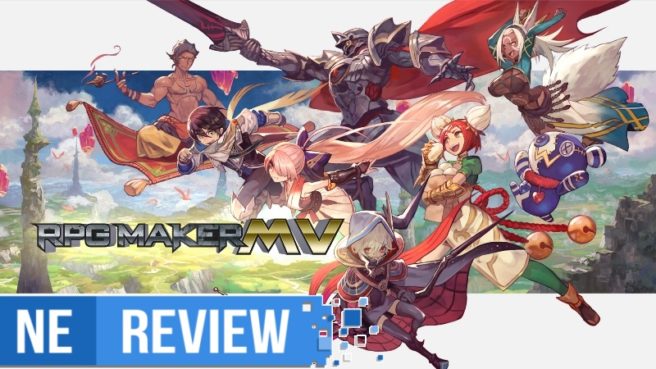 When RPG Maker Fes came out on 3DS years ago and I had the pleasure of reviewing it, I spent countless hours creating short titles as I learned the basics of game development in an intuitive fashion. Being able to not only create, but share your work with others while having a seemingly endless supply of content made it a consistently great time for those that wanted to play simple experiences on-the-go. Even better, despite its name, RPG Maker lends itself nicely other sorts of genres as well. RPG Maker MV on Switch now sees the application migrate to Nintendo’s newest platform. Despite having one less screen, the system lends itself well as a creative canvas to see video game ideas come to life with a retro aesthetic.

RPG Maker has always been an application more so than a game. It’s been able to help those with a creative drive that may not have the resources or teams necessary to start their own studio, but still want to realize a vision through the gaming medium. RPG Maker’s flexibility in not only being able to create RPGs, but also combat-free games such as visual novels can be done in a variety of ways. Users are given the freedom to create what they’d like to their heart’s content.

RPG Maker is well aware of its flexibility by also including tags that span a wide array of genres – of which you can tag up to four to describe your project – when working on it or as you’re ready to upload for others to play. While the task may seem daunting to some, RPG Maker MV has a nice little playable tutorial after you boot it up to get users familiar with the navigation and functionalities of its system. You’ll be playing a small game while also helping to add, remove, and fix it as you go in a clever way. At first there is a ton of information that’s thrown at you that can quickly become overwhelming, especially since not every single explanation allows for a hands-on use to try and do it yourself, and the menus at first are a little hard to read. That being said, this is typically the norm with any sort of workstation you come into contact with for the first time. By the end of the tutorial, most things make sense, though there are plenty of other aspects you’ll just have to tinker with to get a better understanding of their uses. 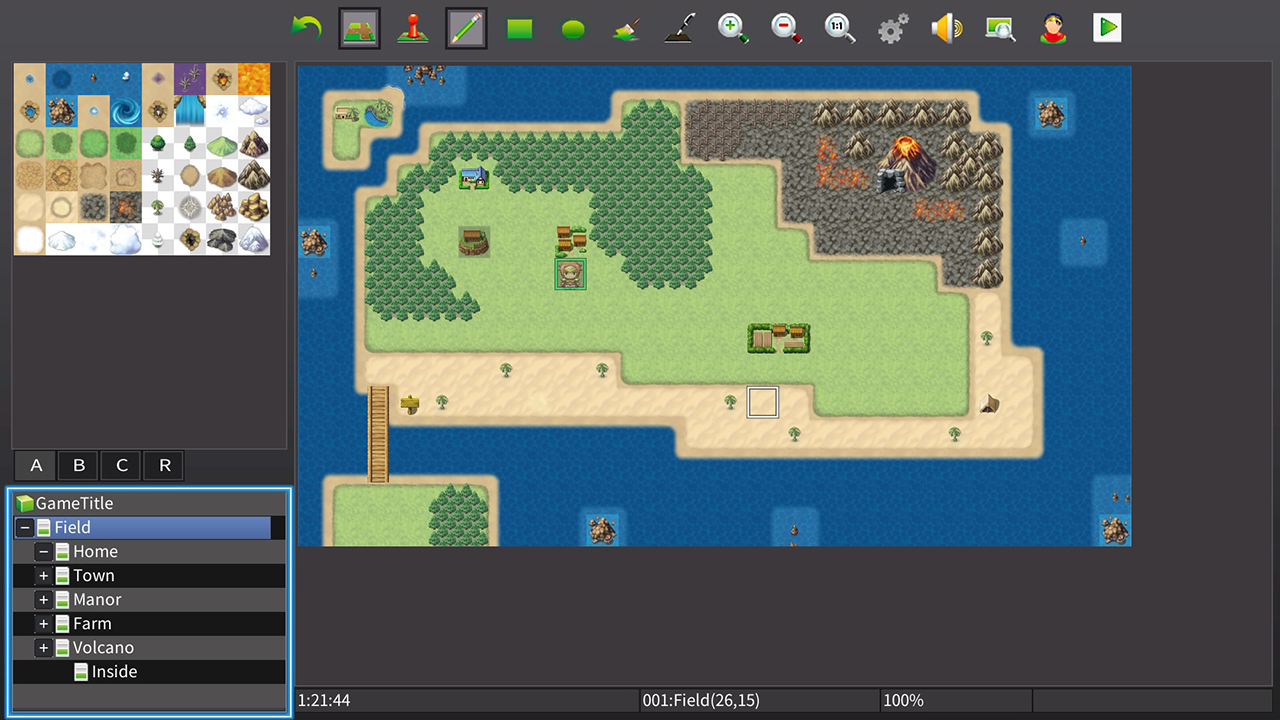 Applications like this on consoles are always odd because you don’t have that flexibility that a PC would in terms of how you want to set up your workstation and being able to import custom made tiles, music, and the like. Because of that, the creativity feels restricted to what’s essentially in the package as a “what you see is what you get” sort of approach. However, the package does feel full and gives a lot of options to see that you’re able to get as close as possible to the game you’re trying to create. Depending on how you look at it, fortunately or unfortunately, DLC is always an option and there is a dedicated section for it within RPG Maker MV, so if for whatever reason you can’t seem to realize your vision with the multiple assets they have available to you, then there’s always the possibility of finding what you need in the future through updates and downloadable content.

Those used to designing levels in other levels like Mario Maker or Minecraft will find that things work much differently here and aren’t nearly as intuitive. However, as stated earlier, one will eventually be able to work their way around RPG Maker MV through use. Being able to write and edit text boxes for items, characters, dialogue, etc., and creating your own character, placing your own world music, designing your own interiors as well as exteriors and choosing which paths lead to which areas is a learning process that takes a little bit of time. Truthfully though, if you’re willing to take that time, you can literally have a prototype of a game up and running within a few hours depending on the complexity of it. One of my favorite parts is the environmental design, so a simple story I want to tell of, say, a girl on a farm helps come to life a little more through the assets I can use and place in any way I’d like on as big of a canvas as I’d like. You can choose these parameters at will and assign values and sequences to just about anything, creating cutscenes and events as much as you’d like and in no time once you’ve gotten the bare minimum down. 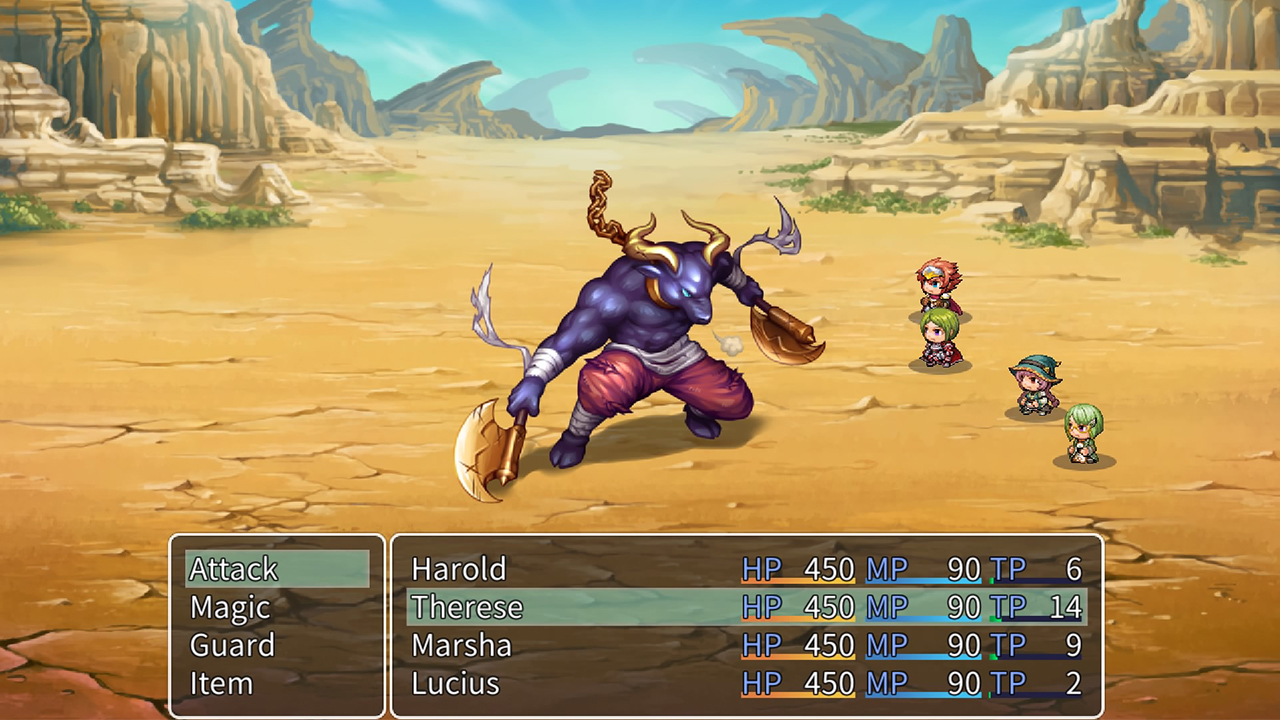 One of the biggest annoyances, however, is that there is this random lag that can happen when switching between menus and tabs. This can make designing feel sluggish, not to mention transitioning between the menus and tabs isn’t that easy as there are prompts within prompts. Sometimes I find myself accidentally pressing B too many times because it refuses to simply move to the module above the one I’m in despite having no selection or interaction with any of the sliders or values within it, causing me to back out and then having to redo it because it doesn’t auto-apply or ask if I’m sure I’d like to exit. A big thing I noticed also was that when I pulled RPG Maker MV out of the dock for some handheld play, I was locked to touchscreen only and was only able to move around during testing of the game periodically, yet some buttons were disabled, making me unable to exit out of testing the game. Closing out of RPG Maker MV and then restarting the game in handheld mode first then allowed me to use both controller and touchscreen capabilities without issue. I’ve replicated the dock-to-handheld issue a few times so I’m hoping this gets fixed.

Creative applications that kind of disguise themselves as games like RPG Maker allow us to truly create now in the palm of our hands and in the comfort of our homes without the need of a team or a studio. Having an engine like this on Switch now allows for you to be able to work at home or on the go, on the big screen and small screen, with touch functionality for a more art-like experience. Though there are some general lag issues and we no longer have that screen space thanks to an additional screen like the 3DS or the ability to work more efficiently across multiple monitors like you’d be able to on PC, the Switch version of RPG Maker MV remains a competent and respectable port great for anyone who wants to start getting into game development and quickly share their work with others in the world.

RPG Maker MV on Switch inspires and encourages creativity just like the many iterations before it that have now spanned almost three decades of releases. Having an application like this on such a widely adopted system gives console players the opportunity to take their ideas and see them come to fruition in a video game format. Despite its name, RPG Maker gives artists the tools they need to make essentially any game they want, and are only limited by their own creative limitations. The Switch lends itself amazingly, much like the 3DS, to being able to help with that creative spark anywhere it may happen in the world. It’s a little less comfortable though since having one screen means more clutter and lack of a dedicated area for panels where you can instantly tap, chain, and manipulate what exactly it is that you’d want. Even with its advantages and disadvantages, however, RPG Maker MV on Switch is a solid application that not only appeals to our creative side and vision to come to fruition not only through pixel art, but also being able to share and play others’ creations and games leaving for an endless amount of content from all sorts of genres.