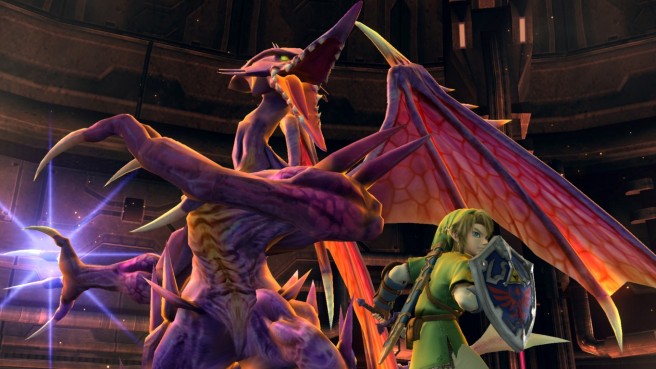 Ridley is in Super Smash Bros. for Wii U, but he isn’t playable. The well-known Metroid villain only appears in the Pyrosphere stage.

“I definitely know that Ridley’s a much-anticipated name for fans, but if we made Ridley as a fighter, it wouldn’t be Ridley any longer. It’d have to be shrunk down, or its wings reduced in size, or be unable to fly around freely.”

“Providing accurate portrayals of characters is something I want to pay ample attention to. If I don’t stick to that thought, then we’d have to lower the quality or break the balance of the game. Something that goes way off spec could break the entire game.”

Sakurai continued by noting Ridley’s presence in the Pyrosphere stage, which he felt would be more appropriate.

“Instead of going through a lot of very convoluted hocus-pocus to make Ridley a fighter, I figured it’d be better to keep Ridley as it currently is, the correct way, and have it feel like a truly threatening presence. There are other icons, too, like Metal Face and the Yellow Devil, which help effectively portray each of their world settings. They go a long way toward deepening the game world, and I think it’s been fun to experiment with.”