SEGA discusses Sonic Origins and the return of Sonic 3 & Knuckles 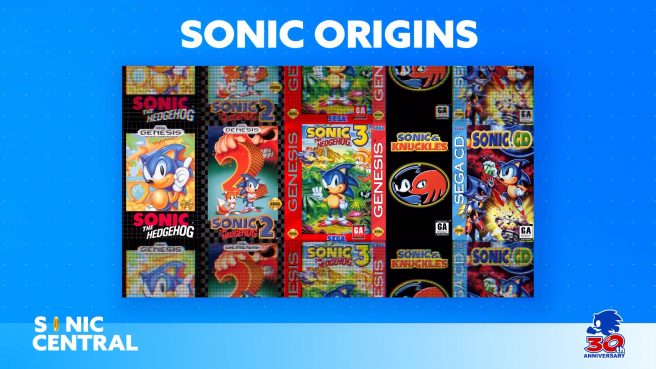 SEGA announced a number of different projects and initiative during Sonic Central back in May. A few different game releases are planned, including Sonic Origins.

SEGA has only shared a few details about the collection thus far. We do at least know that Sonic Origins will contain Sonic the Hedgehog 1, 2, Sonic 3 & Knuckles as well as Sonic CD.

In an interview with Game Informer, Sonic Team head Takashi Iizuka had this to say about the project:

“We have released these titles many times in the past running on emulation but seeing that 4:3 screen ratio on modern 16:9 displays feels very retro. The concept behind Sonic Origins is to make these four legendary titles feel more modern. Of course, this means displaying the title in the full 16:9 screen formats of modern displays. We still have time before this title releases so I can’t really get into the details yet, but I believe this will be a title that not only first-time players will enjoy, but also core fans.”

It’s true that SEGA has already brought Sonic 1 and 2 to Switch through the SEGA Ages line. However, Iizuka believes that fans will still want to check out Sonic Origins since it will have its own exclusive features.

“I am glad you like the SEGA Ages versions of Sonic 1 and 2. There are a lot of original features and game modes we put in there exclusively, so if people haven’t played it yet, they should give it a go. However, Sonic Origins will have features that not even the Sega Ages versions have. Not only will the playable game area be in the 16:9 format, but it will also be a multiplatform release of a title containing Sonic 1, 2, 3 & Knuckles, and CD. Look forward to hearing a lot more announcements about Sonic Origins in the near future.”

Finally, Iizuka said the following about the return of Sonic 3 & Knuckles:

“I think a lot of fans really appreciate the news that we will include Sonic 3 & Knuckles in Sonic Origins, but I think I am the most excited out of everyone. It was the first Sonic title that I worked on and is a title that is really close to my heart, so having the chance to re-release this title after decades is something I am really looking forward to. As development on the title is currently progressing, every time I see Sonic 3 & Knuckles data, I am reminded of all the hard work and excitement I had when I was younger making that title. It really brings back a lot of memories for me.”