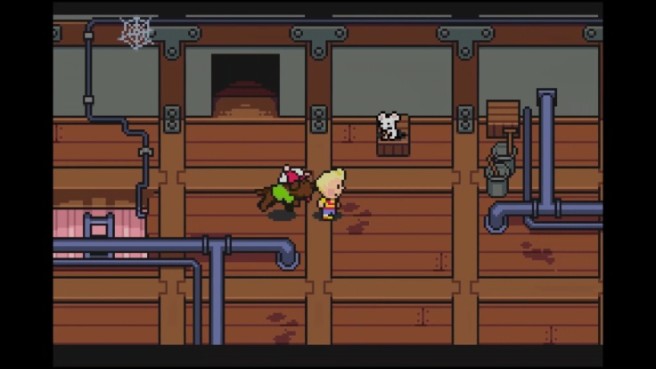 Mother which was inherited from parents to children

ND: What do you mean by debates?

SI: When we speak about Mother 3, it’s about the main character’s father Flint who was always searching for his only child who had gone missing, but I was a bit worried that ‘wouldn’t this keep dragging on forever?’. So, when I talked with a staff member, he also just had a child at that time, and he said ‘If he were a father, I think normally he would search for them every day’. So then I thought to myself again ‘so that’s the correct thing for a human. I’m just a game creator after all’ (laughs). Flint became a father who continued searching for his child all time.

ND: I was a grade schooler at the time the first Mother was released, but I was surprised when my parents, who had no interest in games, read the Mother guide book at a bookstore, and then gave it to me as a present without saying anything. Many of the visitors who come to this event today are parents and children indeed.

SI: I’m really glad that this has become ‘a game that parents tell to their children’. By some possibility it might even get told to grandchildren too. There are also people who give it to their children, like ‘this is the game daddy was infatuated with a long time ago’. I’m glad that it can make communication between people better.

ND: Including those kinds of people, it gives an impression of a broad age range.

ND: I see. Even though Mother 3 hasn’t been released overseas yet, they know about Lucas from SSB…

SI: But recently when I heard from foreign fans, they said they all have played Mother 3. They also learned the Japanese language too.

ND: What enthusiasm! Just for an RPG with a lot of text…

ND: Mother is a series that many of our readers have been wishing for a sequel even now. In a previous interview Itoi-san said ‘you will not create a Mother 4’, but you also said ‘if somebody else would make it…’

SI: If it goes like that I will look forward to it. I don’t want to say that I don’t like it. I want to say ‘that’s good!’. Mother is no longer my own possession anymore. I didn’t write it all by myself unlike a novel either. Mother has been always supported by customers unendingly, and even nowadays it still receives support after all.