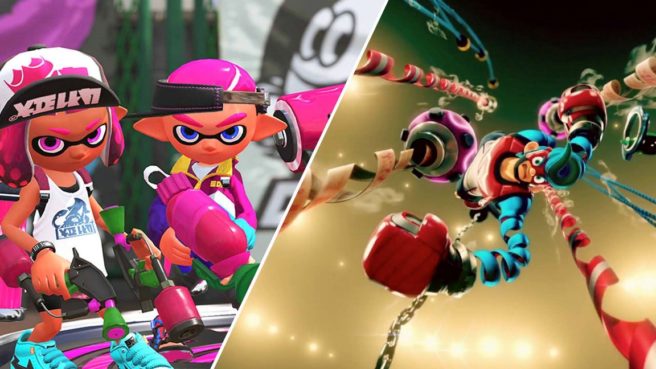 Two of Nintendo’s developers attended GDC 2018 to deliver presentations about their Switch games. Hisashi Nogami and Kosuke Yabuki, the producers of Splatoon 2 and ARMS respectively, were both on hand.

At GDC, Nintendo caught up with Nogami and Yabuki to talk about GDC, their presentations, and more. You can read the full interview below.

Thank you both for your time. How has your GDC experience been so far?

Nogami: This is actually the first time I’ve attended GDC, and the first time we’ve talked about the history of Splatoon as a series, so it’s been a good opportunity to look back at the games we’ve made. We were unsure about many things while making them, but GDC allowed me to look back and realize that everything was able to fit together in the end.

With that said, this is also the first time I’ve made a presentation of this sort, and there are many things I would have done a little differently. I hope to have another chance to do something like this.

Yabuki: This is also my first GDC – the scale of the conference is very big, and it almost feels like a fun festival of sorts. For me, being able to give a presentation to so many people was a very precious opportunity.

ARMS has only been out almost a year, but there have been so many people who has responded to the characters/game and taken a lot of joy in it. I’m very grateful to see that: it made me feel glad that we made it.

That’s great to hear! So, what’s something our readers who can’t attend GDC take away from your panels?

Nogami: For Splatoon, I hope people would take away that this is not something that we’ve made just as a self-contained game, but we think of it as a service that can evolve – this even extends to experiences outside the game itself. I think this may be summed up best in the title of one of our slides: The Splatoon Experience. It’s not just a game itself, it’s an experience!

Yabuki: In the ARMS presentation, I talked about game balance and aiming for the game to have a tennis-like balance. I think if you look at tennis you’re hitting a ball back and forth between an opponent who is a bit farther away from you. In some ways, that resembles a form of communication. In ARMS, I hope people feel like this is a form of communication; no matter if they’re playing locally or far away online. I hope people don’t see it as some sort of brawl, but more like a fun, sports-like competition.

What was it like meeting fans of Splatoon 2 and ARMS at GDC?

Nogami: Whenever I have the chance to interface with fans directly, sometimes I get so happy that I end up crying. When we develop games, we sort of silo ourselves away and include what we imagine and hope people will enjoy. But actually being able to talk to those fans and see their reactions is sometimes overwhelming. It’s a great experience and incredibly rewarding as developers to see direct reactions from the fans.

Yabuki: You know, ARMS, just like Splatoon, is a game that we’ve regularly been updating, and a lot of those updates come from player feedback. So, it really feels to me that it’s not just the dev team on our own. We’re all helping to refine the game together.

I think GDC is interesting because it’s a gathering of people who are all developers. Some people have come up to me and asked to take pictures with me or for my autograph… and I’m thinking I may actually want their autograph! So, it’s kind of a very interesting situation when you have all of this mutual respect.

That’s very nice to hear. As a final question, do you have a message for our readers?

Nogami: Right now, we’re right in the middle of making the Octo Expansion, and it’s planned to release this summer. Like Mr. Yabuki mentioned, the fan’s voices and reactions have shaped how the content evolves. We’re planning to update it as much as we can, so if you haven’t played the game for a while, you have plenty of time to catch up and help us evolve the game.

Yabuki: Also, it’s not too late to start ARMS too! (laughs) For my message: the Nintendo Switch is a system you can play anywhere and with multiple different playstyles. I hope people keep playing ARMS in whatever style suits them.

There’s going to be a lot of new games coming to Nintendo Switch, but I hope people keep playing games like Mario Kart 8 Deluxe, Splatoon 2, and ARMS with their friends and family via local wireless and online play.

Thank you Mr. Nogami and Mr. Yabuki. Please enjoy the rest of GDC.

Nogami & Yabuki: Thank you very much!