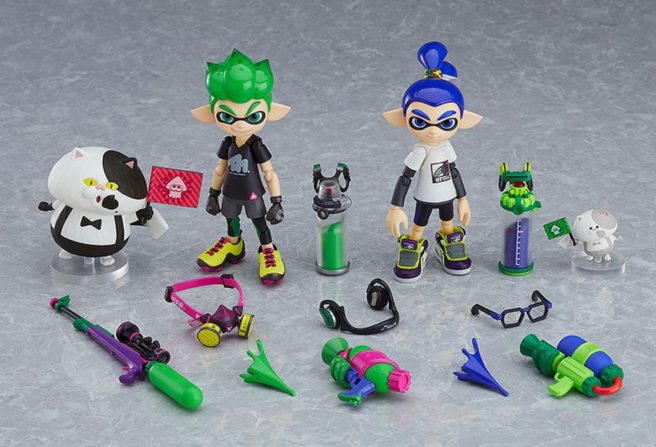 Play-Asia has opened pre-orders for the Splatoon Boy and Splatoon Boy: DX Edition figmas. The first one only includes a single figure while the DX Edition comes with two (as well as Judd and Li’l Judd).

Here are the official product descriptions and a few photos:

From the popular video game “Splatoon” comes a figma of the Inkling Boy!

– The smooth yet posable figma joints allow you to act out a variety of different scenes.
– He comes with both a smirking expression and a frustrated expression as interchangeable faceplates.
– A Splattershot and Retro Specs are included as optional parts.
– An ink effect part is included to attach to the Splattershot, so you can recreate your favorite in-game moments.
– An articulated figma stand is included, which allows various poses to be taken.

From the popular video games “Splatoon” and “Splatoon 2” come figmas of the Inkling Boy!

– The smooth yet posable figma joints allow you to act out a variety of different scenes.
– Inkling Boy #1 has a smirking expression, while Inkling Boy #2 has a simple smiling expression. Both figmas are included with articulated eye parts allowing you to change the direction they are looking for.
– A frustrated expression from when losing a match is included and can be used with either boy by replacing the eyebrows on the faceplate.
– Splattershot, Splattershot (2), and Splatterscope weapons are included as optional parts. Gear from the game, such as the Squidfin Hook Cans, Painter’s Mask and the Retro Specs, is included as well.
– Ink splat effect parts can be attached to the Splattershot weapons to display them firing.
– Additionally, the referees Judd and Li’l Judd are included, making for another set with a tremendous amount of various included parts.
– Two colors of flags for Judd and Li’l Judd are included. Display with Figma Splatoon Girl (sold separately) for even more fun!
– Articulated figma stands are included, which allows various poses to be taken.