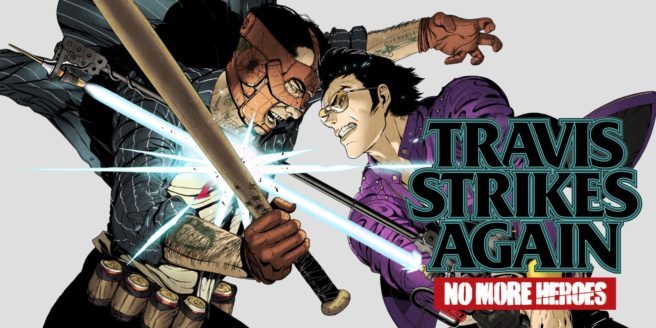 In TSA Travis has to battle the main character of seven separate games. Where did that concept originally come from?

Suda51: First off I wanted to dig deeper into the concept of a game within a game, which was introduced through the ‘Death Drive’ in our game Let it Die. Then I thought maybe Travis wouldn’t fight against all of those usual assassins, but instead enter a video game and battle enemies there. From that TSA was born. At that time the designs we received from Boneface (UK-based artist) really fit in with that image, so we decided to go with the genre of a game within a game.

While TSA might have otherwise become a simple collections of mini-games, because of the novelty of the Death Drive and the aesthetic of the world, I think it has that distinctive feel of a Grasshopper game.

Suda51: Once we finished the quirky design for the Death Drive, we then came up with the idea of having ‘Death Balls’ and then to the game being an adventure to find those balls. The creation all stemmed from there. Also, even though the player is entering a game we also wanted to have a base of reality, so we were mindful in each game of properly introducing that immersion into the world.

You definitely seem to have spent a lot of time on the game boot melodies and logos! (laughs)

Suda51: Originally, when you pressed the button on the Death Drive you only went to the boot screen, but I thought that was a little off, so right until the end we worked hard on that part where the player gets pulled into the game. When I was doing the debugging, I was worried that the players might have the same feeling of something being missing that I had. For me that game refinement we did really helped fill that void.

How did you decide on the genre and layout of each of the seven games?

Suda51: Actually they were originally games that hit a stumbling block in development and never got made. Once we looked back over those we had something like six games. It’s kind of like we were bringing games in the development graveyard back to life or inserting a soul into those empty shells. It wasn’t like we were just pulling games from anywhere to fill the game, but almost like those games were the reason that we wanted to make TSA – that was the impression I had.

I can see that. With every game, even though there is a nostalgic feeling, there is also a sharpness there.

Suda51: ‘Electric Thunder Tiger 2’ was originally the landmark game for TSA as it takes the form of a conventional action game. This game represents best how TSA was in the beginning. After that, the game **removed for spoilers** became the foundation for ‘Life is Destroy’. ‘Coffee and Doughnuts’ had the feeling of one of those absurd side-scrolling adventures from the past, so that’s the shape it took in the end.

I was really surprised that in the game ‘Serious Moonlight’ you used the world from Shadows of the Damned.

Suda51: The budget for that game was large and the amount of craft that went into the map meant we were left with a great final product. I thought: I’m definitely going to re-use that world sometime! (Laughs) And when I saw the illustrations sent over for the character of Eight Hearts in TSA, I immediately thought: that’s Johnson (from Shadows of the Damned)! Boneface had drawn the character without any knowledge of the game, so it was all a complete coincidence! Because of that, I thought I’d use that world. I also thought it would give players a surprise.

You also wrote the Adventure Mode, didn’t you?

Suda51: Yes, I wrote all of the story for the Travis sections. When I looked at all the parts I had to write for TSA, I think I ended up writing over one hundred different sections. For an action game, the amount of text became really lengthy. Because of that the schedule ended up running late… (Wry laugh) The parts for Bad Man were written by Masahi Oouka, who also wrote some of the story for The Silver Case.

With writing the story yourself and even doing the debugging for each individual game, you must feel a real sense of accomplishment.

Suda51: True. But while I do have that feeling, I also wonder if I couldn’t have done more. At first, I intended to spend a lot more time on ‘Golden Dragon GP’. The game was originally planned as an homage to Zero4 Champ, and it was supposed to be around the same length as that game. But then I thought if this game took ten hours while the others only took a few hours, it wouldn’t really make sense. (laughs) But someday I would definitely like to make Golden Dragon GP into a standalone game.

The Future of No More Heroes

Suda51: TSA didn’t always play nice. The gameplay and general production were a challenge, and at times it was really wearing. But I think on the whole it was a game worth making. During development we thought about just working on it as one game to save on production, but then if we did that we felt we might as well have just made No More Heroes 3. The point of making TSA was giving life to these seven different worlds, so I think we made the right choice in the end. I don’t know what the critical response will be, but I’m definitely interested in how it is received by players.

Can you tell us anything about future development for the No More Heroes series?

Suda51: There is a definite link between the success of this game and the production of a third game in the series – that’s what I believe. On that front I am relying on support from fans both home and abroad. I already have a plan for No More Heroes 3, as well as a basic plot, so I definitely want to make that game a reality.

I’m looking forward to it. If that time comes, will you take on the directing role again?

Suda51: I think I’d like all three of GhM’s directors to oversee the game together. But for that to happen I’m really hoping first that TSA will have had an impact on the global stage.

Do you have a message for all those fans who are looking forward to playing the first game you have directed in a while?

Suda51: I think TSA is a very distinct title. The original No More Heroes was well-suited to the Wii and had a good critical reception. Now on the Nintendo Switch I think we’ve been able to make a game that, from the moment you get hands on the console, really feels like the long overdue rebirth of Travis’s character. I made this game always thinking about what type of games should be made for this generation. Also, this is a game that asks the question of what exactly games, and the player takes that journey alongside Travis. This is also a game that marks GhM’s 20th anniversary and reflects on that history. All of this has been unified in one game. This is an experience you can’t get elsewhere, so I hope you’ll all play it!