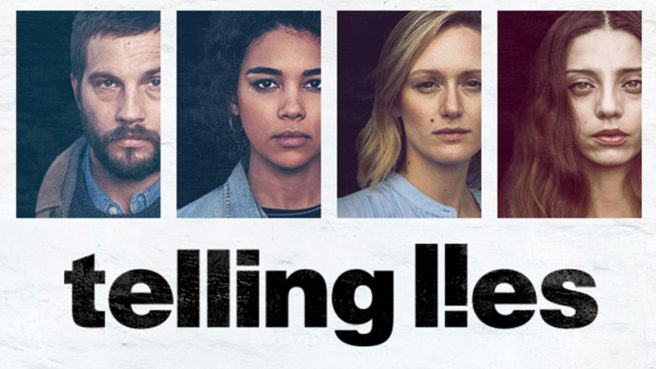 Thanks to Annapurna Interactive, Sam Barlow was able to bring his investigative thriller Telling Lies to Switch this week. Right around the game’s launch, we caught up with Barlow to discuss the project in greater detail. We chatted about the experience of adapting the title for Switch, the possibility of Her Story receiving a port, and more.

Our full discussion can be read below. As for Telling Lies, the game is available now on the Switch eShop.

For those unfamiliar with Telling Lies, what’s the general overview of the game?

Telling Lies is a game where you play the part of a woman who is searching through a stolen hard drive full of secretly recorded private conversations. It’s part surveillance job, part detective work, part thriller. As you listen in on the conversations, search through all the footage, you put together a picture of what is happening and use that to dig deeper. The whole game takes place on a computer desktop via some misappropriated government software so it’s a very immersive simulation of that kind of spy story.

Telling Lies isn’t the typical kind of game we see these days. Where’d you get the original idea for this type of narrative experience?

I’ve always been a fan on exploration in games — Metroid and Zelda are my go-to franchises. And I wanted to bring that feeling — of freedom, discovery, of piecing together a map — and apply it directly to narrative. At the same time I was exploring ways of using actors and performance in games and after growing frustrated with the cost and effort of performance capture, I kind of wandered into the idea of using filmed performance. Combining the two, I put together the idea of Her Story — and Telling Lies was a further iteration and expansion of the idea. These are games where you explore a story with the freedom and discover of space that you get out of the best 3D games.

Telling Lies, much like Her Story, does a tremendous job at weaving so much narrative to go down a path that players uncovers for themselves. What’s the writing process like when having to take so many scenarios and characters into account and connecting them to certain keywords and markers? Does it feel overwhelming having to keep up with all of it as you’re planning this out?

There are a lot of spreadsheets! We spend about half the writing effort up front on research and character work. A lot of background investigation, interviews, digging into a lot of different sources. So we have enough detail and truth and layers to support this kind of gameplay where you’re asking players to really dig into and take your story to pieces. And then once we have a script we have to do a lot of balancing. I try to keep things pure — so I’ll write from the character’s perspectives, have that drive the action and dialogue. Then I plug it into the computer and we do a pass of tweaking and balancing to reflect the gameplay. Then back to character. Rinse and repeat until we’re done!

A lot of the footage can be seen done over VoIP and feels authentic with one-shot takes and interactions from the perspective of multiple characters each with their own video to watch. Is a lot of this improvised or are the performances really just that good with a 1:1 read of the script?

Yeah, because of the balancing we had to be pretty word-perfect on the script once it’d been iterated and tested. We put a lot of effort into setting up the shoots so that the actors were able to lean into the reality of the situation. We shot simultaneously from two locations and the actors had a small rig that pretty much mimicked a phone or laptop. The locations were dressed in all directions, real spaces. So they were free to move, to put their bodies to use in the way they would naturally. They’d see each other as if they were really video calling and that helped a lot — the performances fed of each other in a way that was very organic.

With the feeling of detective work being done uncovering files and keywords, were there any mystery shows, films, or other games that inspired you or helped with the process of how you design?

I had a lot of influences! But really the biggest were Zelda: Breath of the Wild and The Conversation. Zelda, well it’s the only game I can think of where the freedom feels so generous and genuine — the game is so player-centric, but it delivers on that. It’s the opposite of most open world games in allowing players to go wherever they want and that being truly satisfying. A masterpiece! I was aiming for a narrative game that had that sense of freedom and generosity. And with the movie The Conversation — it’s a story about obsession, surveillance and a man who becomes so focused on a specific recording, whose subtext and meaning transforms as he listens to it over and over again. And there’s a sequence involving a tape with a very clunky, analogue set of reels and buttons that really informed how tactile and hands-on we wanted the video watching interface to feel in the game.

How’d the partnership with Annapurna Interactive come about?

I wasn’t really looking for a publisher, but when I was putting together the idea for Telling Lies, we were introduced and the partnership made a lot of sense — both of us bridging the worlds of movies and games. Their reputation for storytelling and the types of stories they’ve tackled in games and film speaks for itself… so we took it from there.

What was behind the decision to bring Telling Lies to Switch?

We designed the game with console in mind at the start and so we always wanted to see if we could make this work. There’s something very special about playing it at home and having your TV become a window into these character’s intimate, domestic spaces. And with Switch you have the handheld option too!

Telling Lies did a great job at creating an immersive experience on PC with its sort of database exploration utilizing a keyboard and mouse like you would any normal computer. How does controller optimization translate to Switch when searching for keywords? Is the virtual keyboard heavily used or is there another method implemented, like predetermined words?

The key way I play on console is to use the subtitles — basically if someone says something interesting, you can quickly select the word and jump into a search from there. You can also bookmark moments that stand out and return later. So just with the controller you can easily jump through the videos and follow down avenues of investigation. You’re scrubbing on the analogue stick, so it’s a very intuitive process on a gamepad. Easy to sit back and relax on the sofa, lose yourself in the experience.

Her Story was optimized well for mobile. With that in mind, will there be some sort of touchscreen support on Switch?

Yep, in handheld mode, the Switch game works pretty much the same as mobile — so you have both play-styles available.

Do you have any interest in bringing Her Story to Switch?

It could work! It wasn’t conceived of as a console game in quite the same way, but we’ll see how Telling Lies does!

Now that Telling Lies will be on Switch… are you open for Smash Bros. representation?

I have always wondered which of the cast would win in a fight, so this seems like the safest way to find out…

Do you foresee yourself continuing to create more of these narrative games in the future? Are you interested in branching out and trying different types of genres?

Absolutely. Before Her Story, I was making more traditional games (though arguably the Silent Hill series skirts that definition!) and making these kinds of things has been about taking the lessons from those traditional games and pushing into new spaces, whilst also expanding what kinds of stories we can explore within games. I am driven to keep pushing and exploring fresh ideas and stories, so really anything is possible!