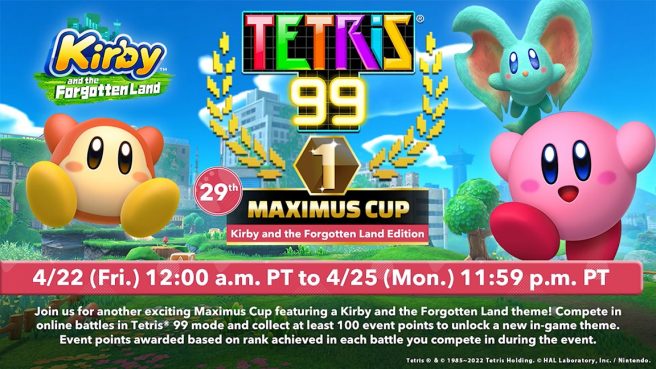 Nintendo has announced that Tetris 99 will soon be kicking off its 29th Maximus Cup, and players will have an opportunity to obtain a new theme based on Kirby and the Forgotten Land.

During the event, any Nintendo Switch Online member simply needs to play the Tetris 99 online mode. It’s possible to earn points based on placement in each match. Once players have accumulated a total of 100 event points, the theme will unlock, featuring background art, music and Tetrimino designs inspired by Kirby and the Forgotten Land.

Below is a trailer for the Kirby and the Forgotten Land theme in Tetris 99:

This marks the first new theme for Tetris 99 since Pokemon Legends: Arceus in January. We’ve also seen designs for a bunch of other Nintendo-published games, including one for Mario Party Superstars, another for Metroid Dread, and more. We don’t see third-party games get that treatment too often, but there was one for Monster Hunter Rise awhile back.