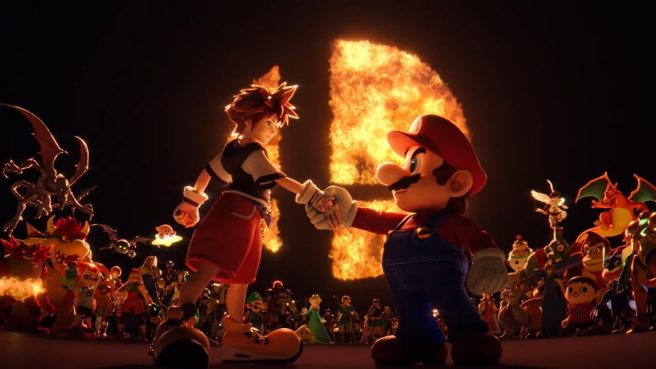 Two of the biggest DLC characters for Super Smash Bros. Ultimate were from Square Enix, with Sephiroth and Sora generating huge reactions from fans. With both, Tetsuya Nomura played a big part in their creation as the original character designer. He’s also been a director on the Final Fantasy and Kingdom Hearts series.

“I think Sephiroth was pretty unexpected, so it was fun to see how surprised people were. Considering he was the second Final Fantasy VII character to be added to the game, I was somewhat unsure if it was okay for him to take up one of those precious slots in the roster. I was relieved to see that people responded positively to his announcement.”

“With Sora, we were thinking that the news would create buzz, so we prepared some other Kingdom Hearts related announcements to coincide with that day. We knew that putting out any sort of message ahead of time could draw suspicion, so we were lying low prior to the announcement. … the fan reaction exceeded even what I’d imagined, so I was extremely happy. (Sora’s handshake with Mario at the end of the trailer) was an element we were insistent about including, so I hope fans noticed and enjoyed it.”

VP of Disney and Pixar Games Luigi Priore chimed in on Sora as well, saying they “were not surprised [by the reaction], but we were thrilled.” The company is pursuing a new approach “to bring our characters to our fans in new ways, and to say yes to things which might have seemed impossible before.” Ultimate Disney was “confident that Mr. Sakurai’s team would do a wonderful job bringing the character to life. Sora was one of the first ever characters to cross over between different Disney worlds, and one of the first crossover characters ever, so we think it’s quite fitting that Sora is the final character to cross over into Smash.”

Finally, GameSpot asked Nomura what it’s like to have three characters he helped come up with appear in Super Smash Bros. Ultimate. On that topic, he said:

“It’s truly an honor that Cloud, Sephiroth, and now Sora – not just one or two of the characters I helped make, but three of them – have been invited into a world that features such an impressive group of characters. I had been hoping to repay Mario and friends someday, as I’ve greatly enjoyed so many of their games, so this opportunity has made me so happy. In fact, nothing makes me happier than seeing the fans’ joy towards the three of them, and I hope that Mr. Iwata would be pleased with their inclusion, too.”