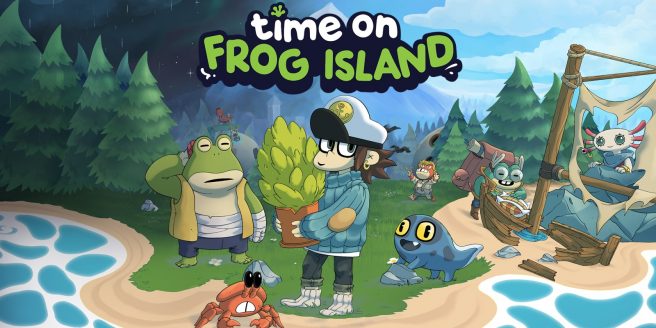 Nintendo Everything recently had the chance to speak with Max Wrighton, director and studio co-lead at Half Past Yellow, about the upcoming game Time on Frog Island. We touched on a variety of topics, including the art style, gameplay, Switch version, and more.

How did you come up with the look for the game? Were any revisions made to achieve the style it has now, or was it naturally crafted from the get-go?

We had already settled on a basic style before we started work on Time on Frog Island (ToFI). We were prototyping a few different ideas and playing with different visual styles at the same time and the art direction just happened to reveal itself very early. The very first tweet we posted with The Sailor already shows signs of the final style.

What prompted the name change to Time on Frog Island from its initial title of Trading Time: A Croak Tale? Was it a need to condense the name or did something happen mid-development that felt it was appropriate to go with the new title?

Trading Time had been the working title for the project since the first prototypes of the game. As we built it the name grew on us as it had a childlike and playful feel to it that we really liked. The initial idea to add the subtitle A Croak Tale was our plan to both keep the working title while improving on SEO, but ultimately it didn’t have the impact we wanted and a full name change seemed like the best idea.

One thing we couldn’t help noticing with some hands-on time is the fluidity of traversal throughout the island with the multiple uses of platforms, items, and ways to jump, bounce, and glide. During development, did the island span to such a way and size that this was something that felt key to do, or did it occur through wanting to do something more than just walk from area to area like other similar games would do?

ToFI is a game about learning the lay of the land, getting lost, and meeting people in a new place. We always knew that there would be a lot of running around the island, so we had to make it a goal early on that it had to be fun to just move from place to place. From the bouncy animations to the level design, it was important that they all worked together to serve “fun of movement”.

To follow-up, because of how good the jumps and utilization of the environment and items feel, were there certain platformers that personally inspired members of the team to create that fluidity? Despite not really being one, Time on Frog Island seems to do platforming much better than most other actual platformers as of late!

Thank you so much! As you stated, ToFI isn’t a platformer as such. However, the game does have platforming elements and learning the limits of the movement system helps navigate the island faster and complete some of the time trial challenges hidden in the world. Those who have seen the game can probably guess that we are very inspired by Nintendo titles, and the 3D Mario games are no exception to that.

Were there too many cat games in recent years that prompted the choice to go with frogs, or were there other amphibious creatures or animals in general that you created concepts for?

Using humanoid frogs as the island locals was actually a completely random decision made by our artist. The sailor was made first and was totally human, but we knew we wanted the islanders to be completely different. One of the first concept pieces we got back was an image of the sailor sitting with a large frog by a tree and it just felt so charming and relaxing. Frogs being popular on the internet was never part of our decision process, but we totally lucked out when we started posting content onto social media.

A big part of games like this and what makes them so attractive outside of their initial welcoming art direction is the ability to go at your own pace. With an increasing output of games in recent years that emphasize this on their respective islands, did you look to some of these as inspiration? Also, what did the team work on the hardest to ensure that Time on Frog Island aimed to achieve that feeling of not being pressured and taking the time to explore at your own leisure?

I have said in other interviews and on social media that the whole team has a deep love of A Short Hike, for us, it is the definition of that type of experience. The goal is simple enough, but most players get sucked into the world during the time it takes to collect those first few feathers. Pan-Pan is another game that is a bit more linear, but ultimately has this openness and lack of pressure to progress. Both of those titles had a large impact on ToFI.

The game is releasing on all platforms, but obviously Time on Frog Island feels right at home on Switch. What was it like working with the hardware, and were there any limitations with it that made the team have to rethink the structure and/or design of the game?

The Switch was always on our mind (mostly because most of the team own one) as a platform for the game, but we haven’t built a game for it before and didn’t have a devkit when we started production. Having said that, the toony style, low poly meshes, small textures, and smart UVing have always kept the game file size small and easy to manage. We made a tweet about exactly that early on in development.

Half Past Yellow is based in Denmark, which is also the home to many other talented studios that have given us the likes of Welcome to Elk, Inside, Hitman 3, Deep Rock Galactic, and LEGO Builder’s Journey in recent years, making it a high-profile location for some of the most unique, memorable, and artistically-driven games to release as of late. What do you think it is about Denmark that makes it be such a wonderful home to some of the most creatively inclined studios in the industry?

That is a really good question. Myself and the other co-founders of Half Past Yellow actually met in Copenhagen on a University exchange program, and after only a few months here fell in love with the city and the game development community here. I think there is a lot of openness and interest in trying new things in the game community here and really shows through from the studios you mentioned.

Time on Frog Island launches on Switch this summer. You can check out our early thoughts of the game having recently played it on Nintendo’s console here.