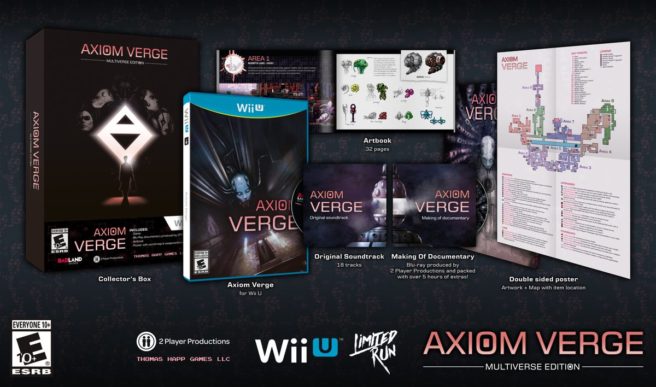 Limited Run Games announced today that the physical version of Axiom Verge for Wii U will be available to pre-order on its website at the end of this month. It came as a bit of a surprise, given that BadLand Games had first made the release known two years ago and it’s been relatively quiet since.

GamesIndustry now has some insight into the situation, and as it turns out, things became very complicated with a bit of a legal battle between Limited Run and BadLand. Here’s a summary of what happened:

– BadLand Games approached Limited Run in March 2017
– Limited Run would be the exclusive distributor of the physical version in North America
– The companies signed a contract in July for 6,000 fully-assembled copies of Axiom Verge on the Wii U, with the intent of a fall 2017 release date
– Limited Run paid BadLand Games $78,000 for the copies, to be delivered at least one week before the intended release date in November at the latest, but that deadline passed with nothing delivered
– BadLand Games then readjusted the release date to January 2018
– Another delay in January, now from Nintendo’s lot check, due to confusion over the game’s ESRB rating
– By the end of January BadLand and developer Thomas Happ appeared ready to resolve it with a new build of the game
– The games still never arrived
– By March 2018, BadLand had gone radio silent and Limited Run CEO Josh Fairhurst’s contact at the company was gone
– He emailed BadLand Games CEO Luis Quintans in April and asked for either a direct refund of the $78,000 owed, or $78,000 worth of Axiom Verge on Switch, PS4, or PS Vita
– The email concluded with the first note of warning from Fairhurst, with his lawyer Brandon Huffman included in the message
– Just over a week after the first email, Huffman gave an ultimatum: if BadLand Games didn’t repay the money by the end of the week, Limited Run would insist on full repayment of the $78,000
– If that was not accomplished by May 21, 2018, Huffman would begin collection efforts
– Deadline passed without an answer, so Huffman sent another warning email
– Just over an hour later, Quintans replied with an apology, a preference for the second offered option, and an offer for a phone conversation the following Monday
– Fairhurst agreed to the second option and offered a time for the call
– That call never happened, and Fairhurst didn’t hear from Quintans again until October 2018
– Fairhurst opted to pursue legal action during that time and began sending requests for repayment in August
– In October, Limited Run filed suit in North Carolina’s Wake County general district court, seeking repayment of the money plus interest and attorney’s fees
– Two weeks after the suit was filed, Quintans finally responded and said BadLand Games was closed and the publishing rights to Axiom Verge had been transferred back to Happ
– In September 2017, Badland Games encountered a problem in which their bank gave a notice of non-payment to the Bank of Spain by mistake, stating that BadLand Games was behind on loan repayments
– This eventually caused BadLand to be locked out of necessary funding for two months and didn’t have the cash to get through the holidays
– BadLand Games liquidated its warehouse stock, then the entire company, and closed entirely in October 2018
– Badland Games managed to move a portion of its staff to BadLand Publishing, a label it had founded in June 2017 on the advice of its administrator to keep distribution and publishing activities separate
– Quintans says the six month gap of silence was because the company was “trying to redirect the business, save the company and jobs”
– Once BadLand Publishing was consolidated, it began to contact those with whom BadLand Games had outstanding debts to negotiate repayment
– Fairhurst had already filed a lawsuit, and the email response from Quintans offering either another BadLand Publishing title for distribution or a “soft” repayment plan to settle the debt went unanswered
– Badland never responded in any way to the North Carolina lawsuit, and Fairhurst says multiple attempts to inform the company of the proceedings went unanswered
– Last December, the district court rendered a judgment by default in light of the fact that the defendant never turned up for court
– BadLand Games and BadLand Publishing were ordered to repay Limited Run the full $78,000 plus $3,675.63 in accrued interest and attorney’s fees
– Fairhurst started working on enforcing the North Carolina judgment in Spain, where BadLand is based
– Quintans says BadLand still has every intention of paying back the money owed, but maintains that the fault is on Limited Run for not communicating with them
– Quintans claims BadLand only received the initial legal complaint in October and the final trial judgment just last week, but no other communications in between
– Fairhurst says Limited Run has now put over $120,000 into the project total and will be “lucky to end up recouping more than a third of what we put into it”

GamesIndustry has even more on what transpired here with further quotes from Fairhurst and Quintans.