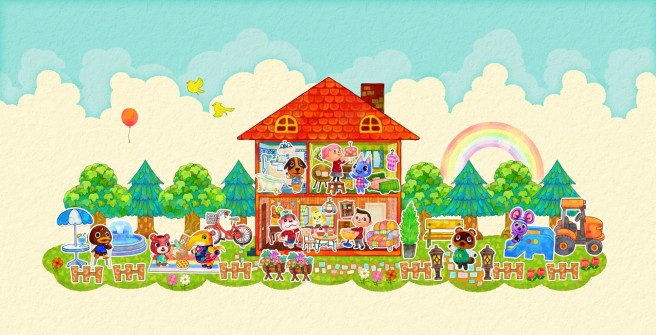 Last month’s issue of Japanese magazine Nintendo Dream features an interview with producers Hisashi Nogami and Aya Kyogoku. Throughout the discussion, Nogami and Kyogoku touched on such topics as how the game to be and how it became a spin-off, the decision to focus on house creation, and more.

Our translation of the two developers’ comments is now in. Read up on what they shared with Nintendo Dream below.

ND: What was the original starting point of the project?

Nogami: Although many customers have accepted Animal Crossing, these games have an aspect that you can do anything and if you don’t decide to do something by yourself, the game won’t progress. Therefore I guess it is a title that divides people.

ND: You say that while New Leaf has sold more than 4 million copies [in Japan]!

Nogami: So when it came time to create the next Animal Crossing, it turned out as a spin-off that focuses on an element of the Animal Crossing instead of being a traditional game.

ND: Was it decided from the start that the game comes for 3DS?

Nogami: 3DS was a given.

ND: Following the flow of releases up until now, I thought the next installment would be on Wii U for sure.

Nogami: I see. There was an idea of deeper play of Animal Crossing, and as many people have played New Leaf, we thought to aim it also for the customers that have enjoyed that game.

Kyogoku: However, we have made Animal Crossing games so that you can develop your village for years, and as this game was developed for 3DS as mentioned before, we wanted players to enjoy the usual gameplay of Animal Crossing and this new game side by side. At first it wasn’t just a new perspective for a single element of the traditional games, but rather we thought to try creating something that is completely different. But as you’d think, if the game was completely different, there is a risk that people who like Animal Crossing wouldn’t want to play it.

Nogami: One of the best received elements of Animal Crossing is ‘house creation’ and ‘arranging furniture’, so we decided to focus on that and we started development.

ND: More than two years have passed after the release of New Leaf, but the many people who still play the game certainly enjoy ‘house creation’. But why did you decide to take house creation as the focal point of the game?

Kyogoku: That was because members of the development team enjoyed it and we took this chance.

ND: What kind of things did you enjoy?

Kyogoku: When the development of a traditional Animal Crossing game comes to the final stage, the staff creates houses where the villagers live. Then we try to imagine ‘I wonder in what kind of house Bob lives?’