Posted on June 7, 2015 by Patrick(@Patricklous) in 3DS, Features, Game of the Month, GameCube, Wii 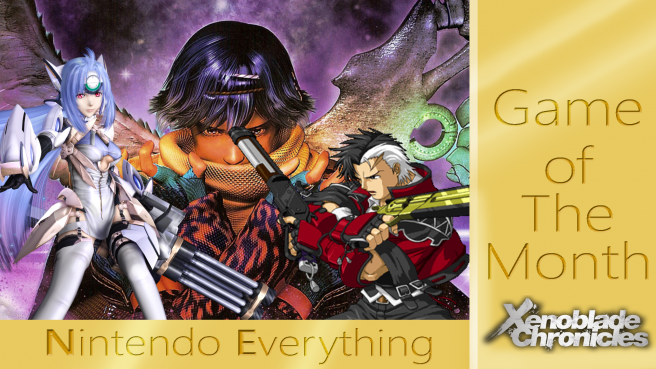 The last time I played through Xenoblade Chronicles was just after its European release in 2011, so I’ll let the other staff writers with fresher memories of it handle the actual game of the month. Instead, I’d like to take a not-so-brief look back at the history of the game’s developer, Monolith Soft, and the games they developed prior to Xenoblade. There are plenty of recurring themes, gameplay elements and staff involved, so let’s see how almost a decade of developing RPGs shaped this robot-slaying, god-climbing adventure. 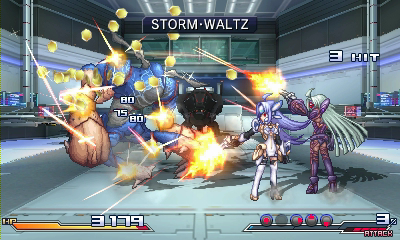 Monolith Soft has developed a broad range of games over the years, despite being a fairly young studio. From its humble beginnings as a Namco-owned studio, Monolith Soft went on to become a first-party developer for Nintendo and has now expanded to include a second studio in Kyoto, which assisted Nintendo’s internal teams on titles like Pikmin 3 and Animal Crossing: New Leaf. The company was founded in 1999 by producer Hirohide Sugiara and director Tetsuya Takahashi after both left RPG powerhouse Square and the company’s output has been developed by a number of other ex-Square employees. Takahashi left Square to form Monolith Soft because he was dissatisfied with the companies’ focus on Final Fantasy titles; it’s rumored that some of the issues with his personal project, Xenogears, were the result of Square shifting resources to Final Fantasy VIII.

Though not technically a Monolith Soft title, Xenogears is very much representative of the studio’s style. It was a collaboration between Takahashi and his wife, who uses the pen name Soraya Saga, and the pair would go on to work together of several of Monolith Soft’s future projects, marrying complex storylines and creative settings. With its bizarre blend of martial arts, mecha anime, weird religious references and, of course, RPG gameplay, Xenogears is a mixing pot of ideas. Not all of these ideas fit perfectly and Xenogears ends up being a bit too ambitious for its own good (as the game’s infamous second disc is testament to), but the combination of creative ideas and ambition is central to the company’s output. The link to Xenogears is most apparent in the company’s first title…

Summarising the entirety of Xenosaga in this tiny section is an impossible task. Not content with a simple story involving a scientist and her android buddy KOS-MOS fighting aliens, Takahashi and Saga took the Judeo-Christian imagery from Xenogears and went completely crazy. The result is an insane, indescribable science-fiction tale that spans three games and twenty hours of cutscenes. Theories of spirituality, philosophy and morality are referenced and Jesus Christ makes an appearance. Despite the confusing overall story, the first game, Xenosaga Episode I: Der Wille zur Macht (yes of course they’re all named after Nietzsche quotes) was a modest success. Namco was underwhelmed by the game’s sales, but players praised the promising plot hooks and interesting battles that adapted Xenogear’s combat system with combination attacks and the ability to summon mechs. 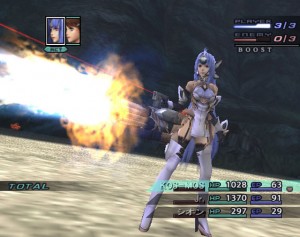 Takahashi and Saga directed and wrote the first episode of Xenosaga, but the pair would hand over the controls of this out-of-control train with the second instalment, which attempted to “refresh” the series under a new development team. What began as an earnest attempt to train up younger staff members like director Koh Arai ended up as a disaster. As a result of the backlash to the sequel’s new protagonist, shorter length, slower battle system, somehow uglier character models and still open-ended story, Takahashi and Saga tried to downplay their involvement with the game, calling parts of the titled unrecognizable from their original work. Although Saga would be removed from production of the series after the second episode, Takahashi pressed on with the third instalment. He also supervised a Nintendo DS remake of the first two entries where he rewrote much of the second games script, refocusing the story on the original protagonist, Shion. Thankfully the series would get back on track with its conclusion, Xenosaga III: Also sprach Zarathustra. This game might not have delivered on its promise to “unveil every single mystery in the Xenosaga series” and there was some bizarre censorship for the American release, but fans and critics seemed to enjoy it and there are still plenty of requests for the series to be continued.

I think that part of the appeal of Xenosaga was the fact that it’s one of the few true “science-fiction” JRPGs. Other series like Phantasy Star and Star Ocean frequently fall back on medieval settings with swords and sorcery, but Xenosaga’s futuristic setting really stands out. Xenoblade wouldn’t have quite the same tone, with Takahashi opting for a mix of sci-fi and fantasy, though there are still sexy androids and scientists trying to play god. Like Xenogears, the Xenosaga series was a bit too overambitious, with the proposed six-part story cut down to a trilogy of games that only covered the first two portions of Takahashi’s original vision. Xenoblade would be the first “Xeno” game to really tell a complete story across a single game without cutting out anything important. Yeah, the second half has some pacing issues, but it doesn’t involve Shulk narrating the party’s offscreen adventures.

This pair of GameCube RPGs, Baten Kaitos: Eternal Wings and the Lost Ocean and Baten Kaitos Origins were co-developed with Tri-Crescendo, a team that spun off from RPG studio tri-Ace. The games definitely have some familiar elements from Tri-Ace’s work, like horrible English voice acting, a soundtrack by Motoi Sakuraba and some bizarre gameplay systems. It turns out that everything in the world of Baten Kaitos revolves around playing cards. These cards, known as “Magnus”, are used for everything from equipment to food and really come into play for the game’s unique turn-based battle system. Battles are a mix of deck building, believing in the heart of the cards and taking photos of enemies to sell for money, and there isn’t anything else out there like it. 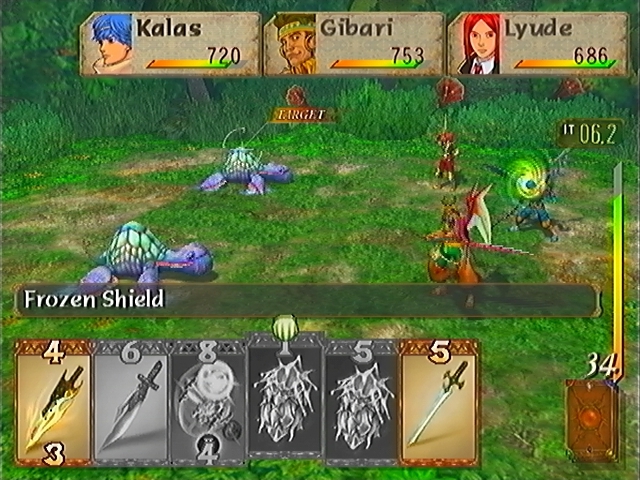 Baten Kaitos’ plot is also quite unconventional, at least in the way the story is framed. Players control an unnamed, invisible “Guardian Spirit” who guides the protagonist, Kalas, in his journey across a series of floating continents in the sky. Without spoiling anything, the disconnect between the player and the protagonist’s actions is used to great effect. It’s an interesting hook that would be revisited in the game’s sequel (which is actually a prequel), Baten Kaitos Origins.

Origins was published by Nintendo in all regions (all regions where the game was actually released – sorry Europe) and refined the gameplay from the original, starred a new cast of characters and, most importantly, had voice acting that didn’t sound like it was recorded at the bottom of the ocean. Interestingly, the game revolves around a conflict between “pro-magnation” and “pro-machination”; Xenoblade would feature a similar struggle against mechanical foes, not to mention the whole floating civilization of winged humans thing. A Nintendo DS entry in the series tentatively titled “Baten Kaitos DS” showed up on a list of upcoming software back in 2004, but the game disappeared from the schedule in a few months and hasn’t been heard of since.

This Playstation 2 game saw characters from throughout Namco and Capcom’s long history of video games teaming up in a colossal RPG adventure. Monolith Soft are kind of an odd choice of developer, since the game plays more like Banpresto’s Super Robot Wars games than any of the RPGs they developed, but this mix of strategy RPG and action game would be a combination of genres they’d revisit plenty of times in the future (just not with Xenoblade). Set in the year 20XX, the story sees characters from different universes showing up in Japan and teaming up to take down common foes like M. Bison, the Red Aremmer and the Gnosis from Xenosaga. There’s a huge range of playable characters in the game with some really creative choices. Sure, there are the usual popular mainstays like Ryu and Chun-Li from Street Fighter or Jin and Heihachi from Tekken, but a large chunk of the game’s cast is also filled out with picks from largely forgotten series like Rival Schools, Klonoa, Mega Man Legends, Dino Crisis and The Tower of Druaga. Many of these characters appear with voiced lines for the first time and it’s cool to see them interact. Unfortunately, the actual gameplay is quite tedious. 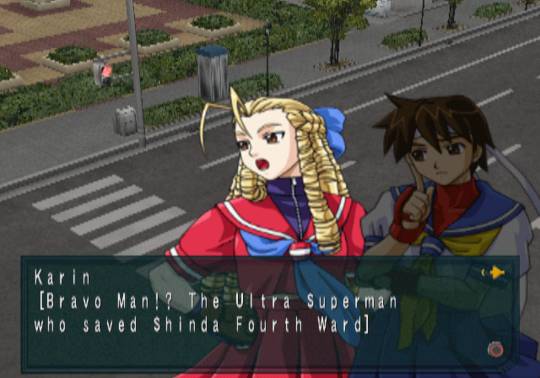 The turn-based strategy segments are pretty typical for the genre, but upon positioning your units next to the enemy and launching an attack, the usual isometric view switches to a side-on view like a fighting game. Each character has a range of different techniques, and hitting different buttons lets them pull off combos in an attempt to juggle enemies for as long as possible and whittle down their HP. Your opponents can do the same thing, though, so enemy phases become a barrage of timed button presses to reduce damage. While the battles are flashy and involved, they also slow down the strategy portions of the game significantly, something that many players criticized. This flaw, combined with the massive character list and abundance of enemy reinforcements resulted in a game that dragged on for far too long. The lack of character customization and relatively low difficulty level also make the game feel a bit too simplistic. 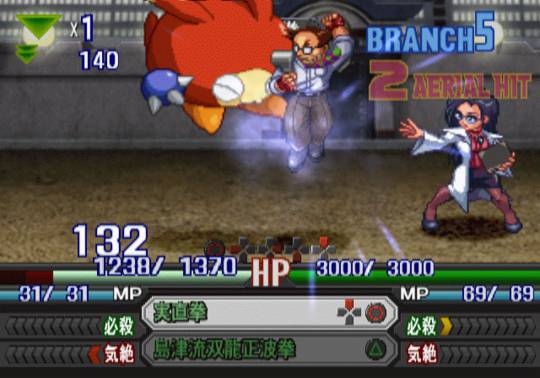 Unfortunately most of these criticisms weren’t fixed by the title’s 3DS successor, Project X Zone. Also directed by Souichiro Morizumi and developed by Monolith Soft, Project X Zone actually saw an English release and added in characters from Sega properties like Virtua Fighter, Sakura Wars and Resonance of Fate, though again critics complained that the fanservice and battle system just couldn’t sustain the game for its massive running time. Here’s hoping the sequel is good!

Look out for the second half of this article later this month where I take a look at Monolith Soft’s move to developing for the Nintendo DS and Wii.