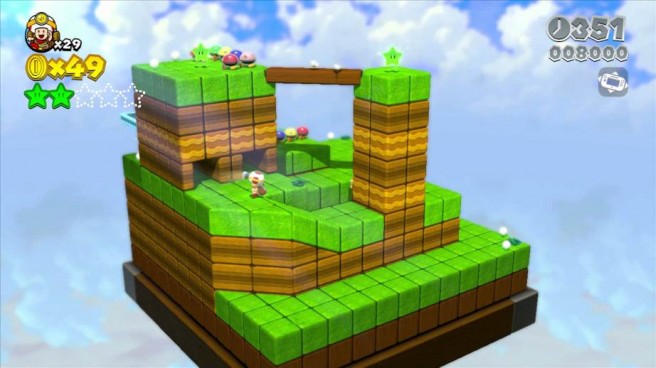 The Adventures of Captain Toad are a unique set of courses in Super Mario 3D World. They only encompass a small portion of the overall game, but they were very well received.

Some had hoped that The Adventures of Captain Toad would return in the future – through DLC, a standalone title with brand new levels, etc. While that’s yet to happen, Super Mario 3D World co-director Koichi Hayashida told EDGE this month that the team would “consider doing something with this feature in the future” if fans continue to show interest.

“We thought they were a lot of fun, so we’re really glad everyone likes them too. If enough fans express such enthusiasm, we’d consider doing something with this feature in the future.”

Kenta Motokura, Super Mario 3D World’s other co-director, also mentioned that the gameplay of The Adventures of Captain Toad was not at all inspired by smartphone titles:

“They weren’t inspired by smartphone games. The idea was to design a game that would become even more fun as you play through it, and this influenced the pace of the game, effectively increasing the rhythm. We felt that a short challenge with quick results would be a good motivation for players to advance onto the next course.”