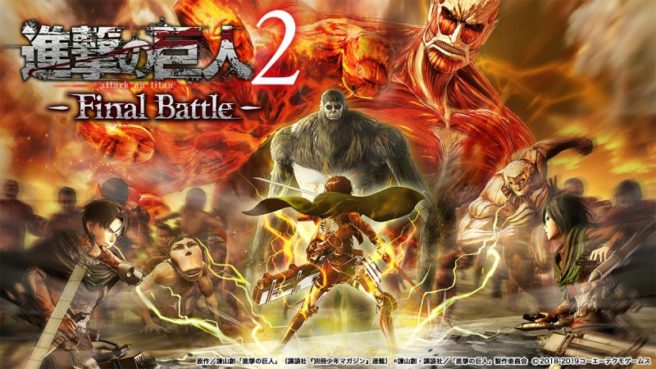 This past week, Koei Tecmo were kind enough to invite us to a pre-release event for Attack on Titan 2: Final Battle. We went hands-on with the Switch build and met with Mr. Hideo Suzuki, Omega Force manager and producer of Final Battle. Mr. Suzuki gave us a personal demonstration of all the new features and answered several of our questions, as well!

We were really impressed with just how much additional content has been added to this expansion, so check below the break for a full rundown of what’s new, detailed mechanics and our impressions.

So, what’s new in this expansion? … A lot. Like a lot, a lot. It’s almost another game’s worth of content! In case you missed it, check out our previous post with direct-feed Switch gameplay of all the new weapons and modes. And stay tuned for this weekend’s episode of the Nintendo Everything Podcast (iTunes / Spotify / and more) where I’ll be casually recounting my experience with the game at Koei Tecmo. 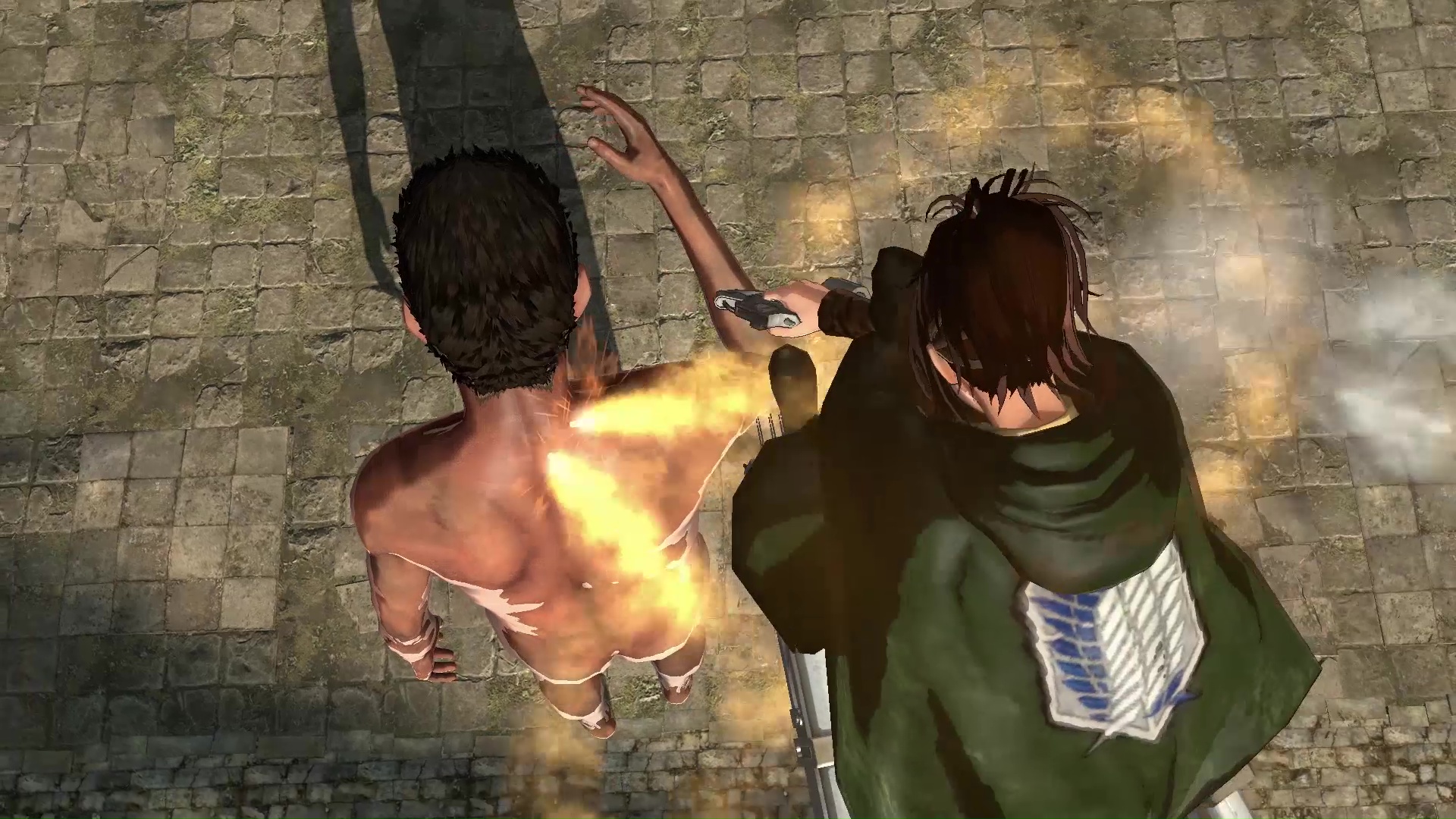 Starting off with the story, the new content follows events from season 3 of the Attack on Titan anime, which is currently airing. Final Battle also contains new and original story content that was approved by the writers of the anime. Mr. Suzuki was proud to say that you can experience the new story from three different perspectives: Levi and Hange, Eren and Mikasa, Reiner and Zeke.

Moving on to systems and modes, the product specialists at Koei Tecmo tell me there’s been a level cap increase and new camaraderie ranks for new characters. There’s a new control assist mode that simplifies inputs during battle a bit for newcomers or fans of the anime that want to experience the game with slightly less stress. Mr. Suzuki tells me that this optional mode was implemented based on feedback from people who were discouraged with the game due to the complex control scheme. Attack on Titan 2’s controls can be admittedly limiting due to juggling many small things like positioning, keeping your anchor connected, boosting, timing, avoiding damage, and more. Depending on your level of commitment, this can interrupt your gameflow with too much frustration, leading to an unsatisfying experience. The control assist mode simplifies targeting and attacking to one button, which is a welcome option for some players. 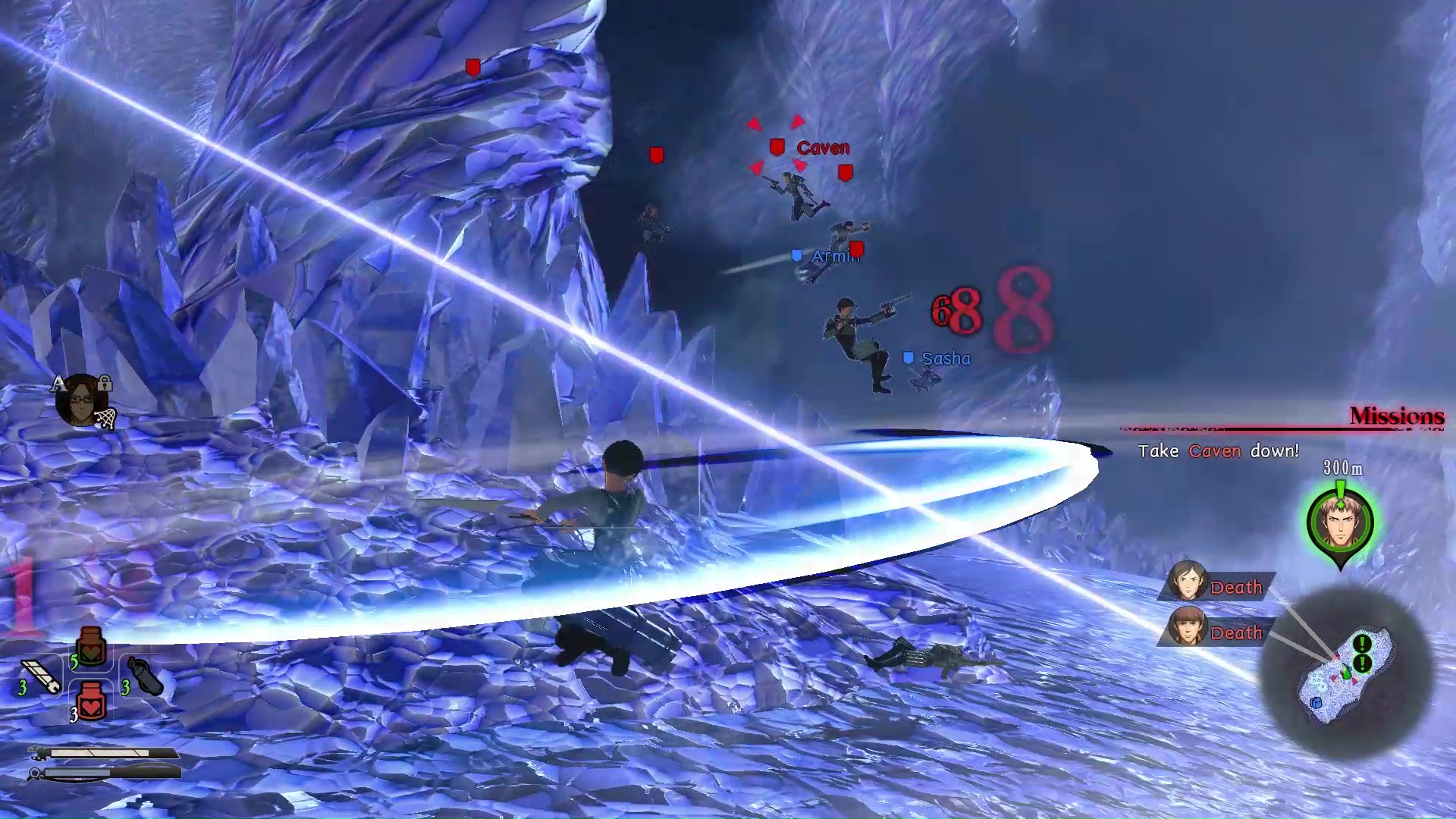 Final Battle also contains a brand-new gameplay mode called Territory Recovery. In this mode, you’ll be fighting on battlefields accomplishing a series of missions played out on the world map of Wall Maria, Rose and Sheena. Your goal is to reach different points on the world map and reclaim territory currently overrun by Titans. You start off by choosing your commander from any character in the story, determining your team’s emblem and name, creating your very own unique regiment. Mr. Suzuki tells me there are around 70 stages in total in this mode. He also touts the high level of customization, and the achievable interactions between characters who were deceased or who were even enemies in the original story. In this mode, anyone can team up together!

The gameplay loop in Territory Recovery mode has you alternating between a Regimental Base Phase and Territory Recover Phase. In the Base Phase, you’ll manage your team and converse with comrades; during the Recover Phase, you’ll battle Titans outside the Walls and gather materials. The territory outside the Walls is divided into different regions, which are interconnected by roads and strategic points. Reclaiming a strategic point gains you access to other strategic points, and so on. Once you capture all strategic points within a region, you’ll then be able to advance to the next region. You can also trigger something called location events at certain strategic points. A location event uses up a number of your remaining turns, but the payoff is that it helps recover more territory. This extra layer of strategy keeps things fresh, avoiding the pitfalls of a simple mission-to-mission structure, as you’ll have to consider when and when not to trigger location events. Depending on the type of location event, you can invite soldiers to join your regiment, add materials to your base, boost camaraderie or battle against powerful Titans. Regiment funds and materials are earned with each victory, so you can buy items, build new gear and more. 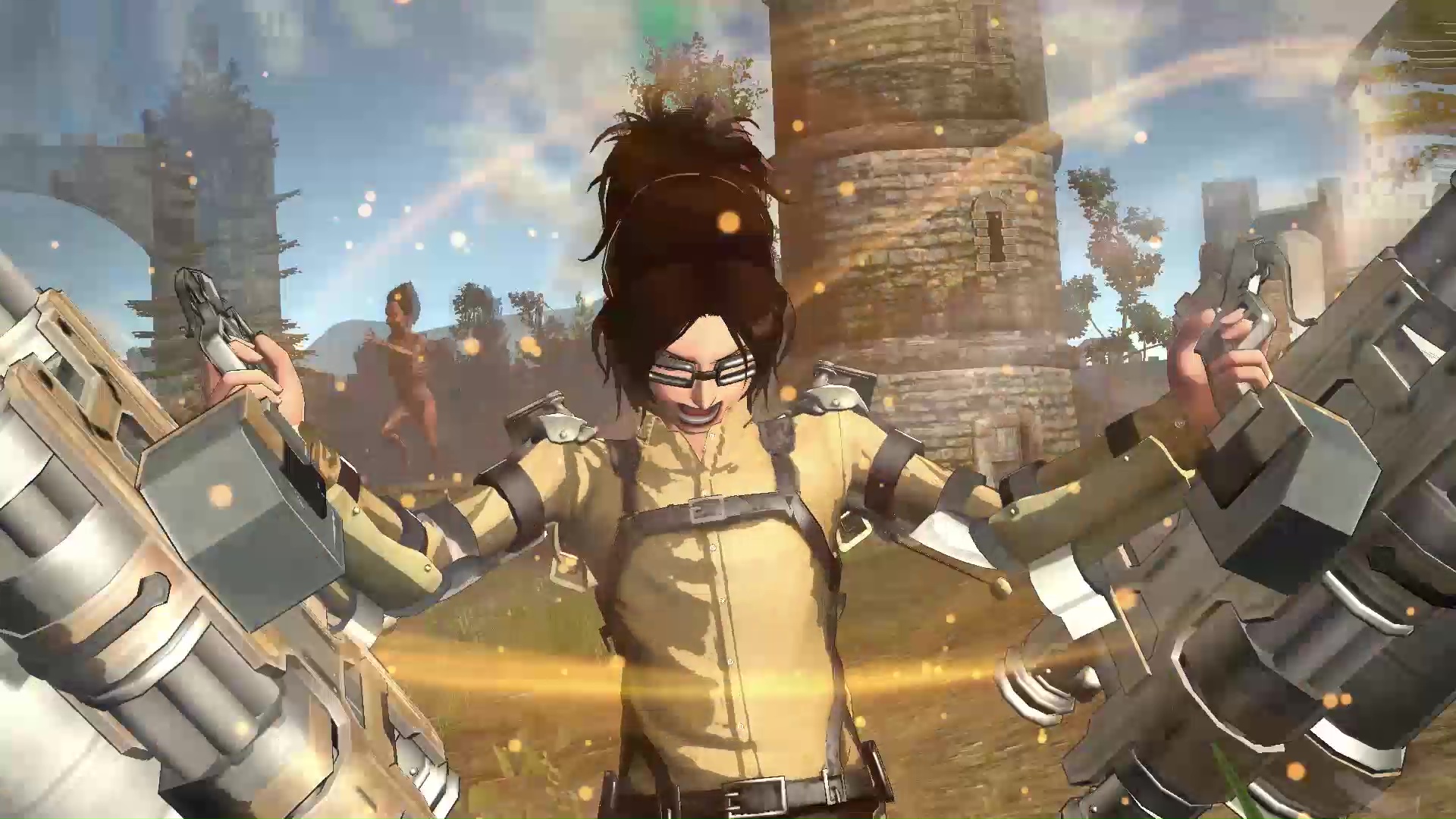 Now let’s get to the action: New weapons!
The standout here are the Firearms. In the anime these were used against other humans, but Mr. Suzuki knew that fans would be let down if they couldn’t use them against Titans in the game. During battles, you’ll be switching your equipment types between blades and firearms freely at bases. Firearms come with several magazine types: regular, scatter, numbing, incendiary, attrition and explosive. Scatter shots do massive damage at close range and hit multiple Titans at far range. Numbing ammo temporarily paralyzes Titans, creating openings for attack. Incendiary shots will set Titans of fire, dealing damage over time. Attrition ammo depletes Titans stamina gauges over time and is most useful for powerful Titans. Finally, explosive shots do damage over a wide area upon detonation.

Firearms function somewhat similarly to blades in that you lock on and anchor to a Titan, but firing requires more of a rhythmic timing to achieve critical damage as opposed to getting that directional sweet spot with the blades. You’ll be performing “one-handed shooting” as you anchor to a Titan with one hand and fire a gun in the other. There is also “two-handed shooting” which is more of a risk/reward where you deal more damage per second, but you’re less likely to hit the body parts you’re aiming for since you’re not anchored to the Titan. Successive fire by holding down ZR is also an option; Mr. Suzuki tells me that all the pros in development use two-handed successive fire exclusively. He was also quick to mention how the controls switch up when equipped with firearms, making the game feel like something out of the shooter genre.

A core function of the firearms is targeting a different body part or making a quick turn to make a “break shot” timing ring appear. Nailing the timing will allow you to enter a “break state” where all of your attacks become critical hits. If you can believe it, you’re even more mobile with firearms with the ability to quick turn and launch into the air. This is especially useful in order to get behind a Titan to go in for the kill with quick turn, two-handed shooting.

All of this sounds like a dream, but the firearms aren’t without their downsides. Each shot inflicts less damage than blades, and they’re less accurate. Titans also won’t stand for being shot at from afar. Their behavior will change accordingly by chasing you down and throwing things at you. 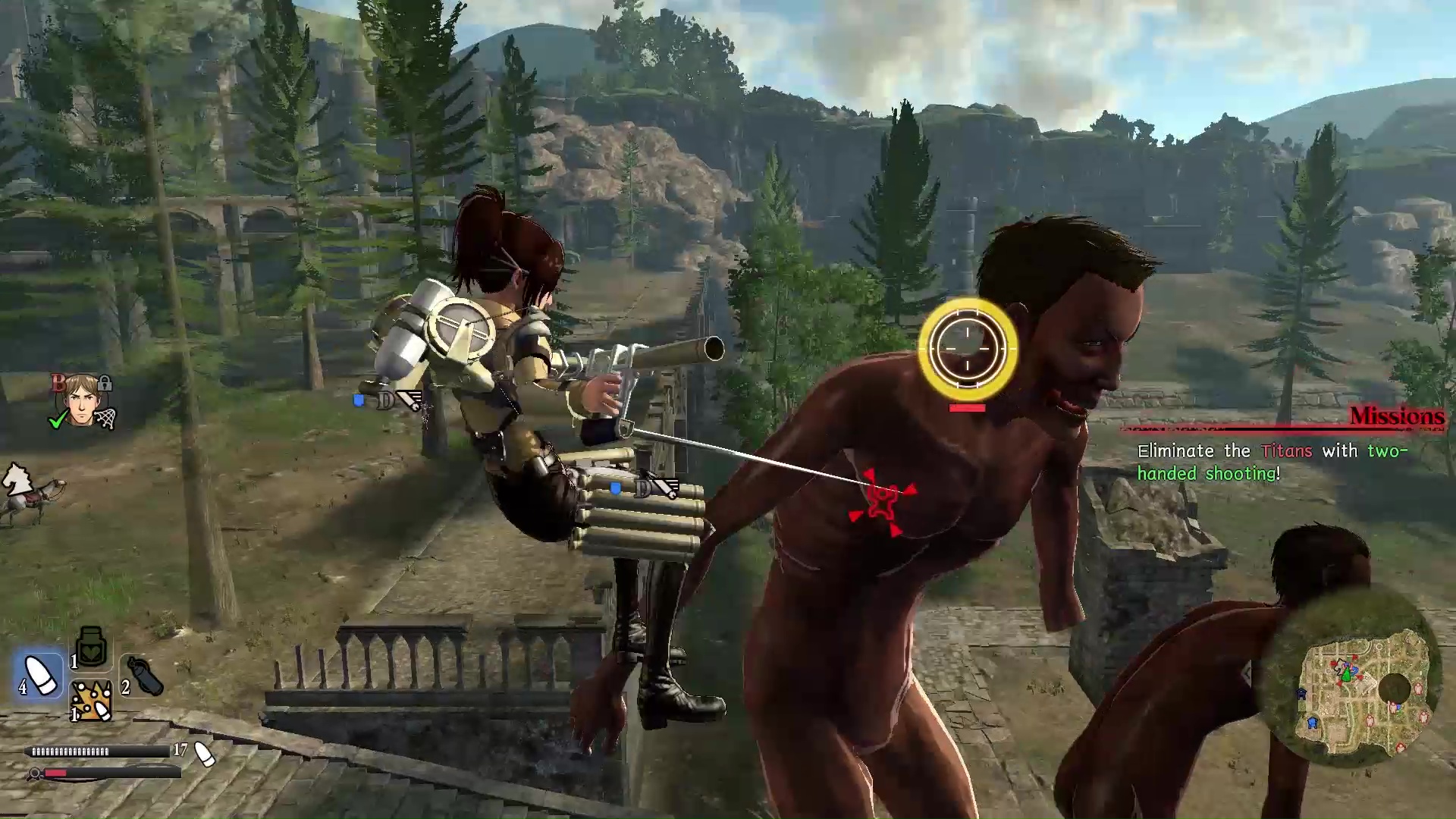 Another new weapon addition in Final Battle is Showdown Equipment mode. Once your showdown equipment gauge fills up, you’ll enter a powered up state for a limited amount of time. If you have firearms equipped, you’ll be upgraded to the Gatling Gun! You’ll be blowing away Titans limb-by-limb, which feels incredibly gratifying considering how much trouble Titans usually give your team. However, a mode this powerful doesn’t get achieved so easily. Not only does your gauge need to fill up, but you also need to have ample equipment stock. After using this mode, your stock will deplete and you’ll need to replenish it by completing side missions.

When entering Showdown Equipment mode while equipped with the blades, you’ll be granted the Thunder Spears! As the product specialists at Koei Tecmo call them, these are less like “spears” and more like “Mad Max style hand cannons”. With these equipped, you can fire off a barrage of missiles that explode Titans to bits, leaving behind only their ashy remains.

Finally, there are now Human to Human battles in this expansion. These missions are much more fast-paced and hectic than those against Titans, with aiming and dodging on a dime being paramount to surviving these dogfights. Humans are more aggressive and fast-paced, and you can’t anchor to them like you can with Titans. The trade off is that they can be felled in a well-timed slash; keeping an eye on when enemies drop their guard to reload their firearm nets you a one-hit kill that plays out in a quick and satisfying cutscene. The flow of battle and forced aggression breeds a different style of fight that almost feels like playing a different game entirely! 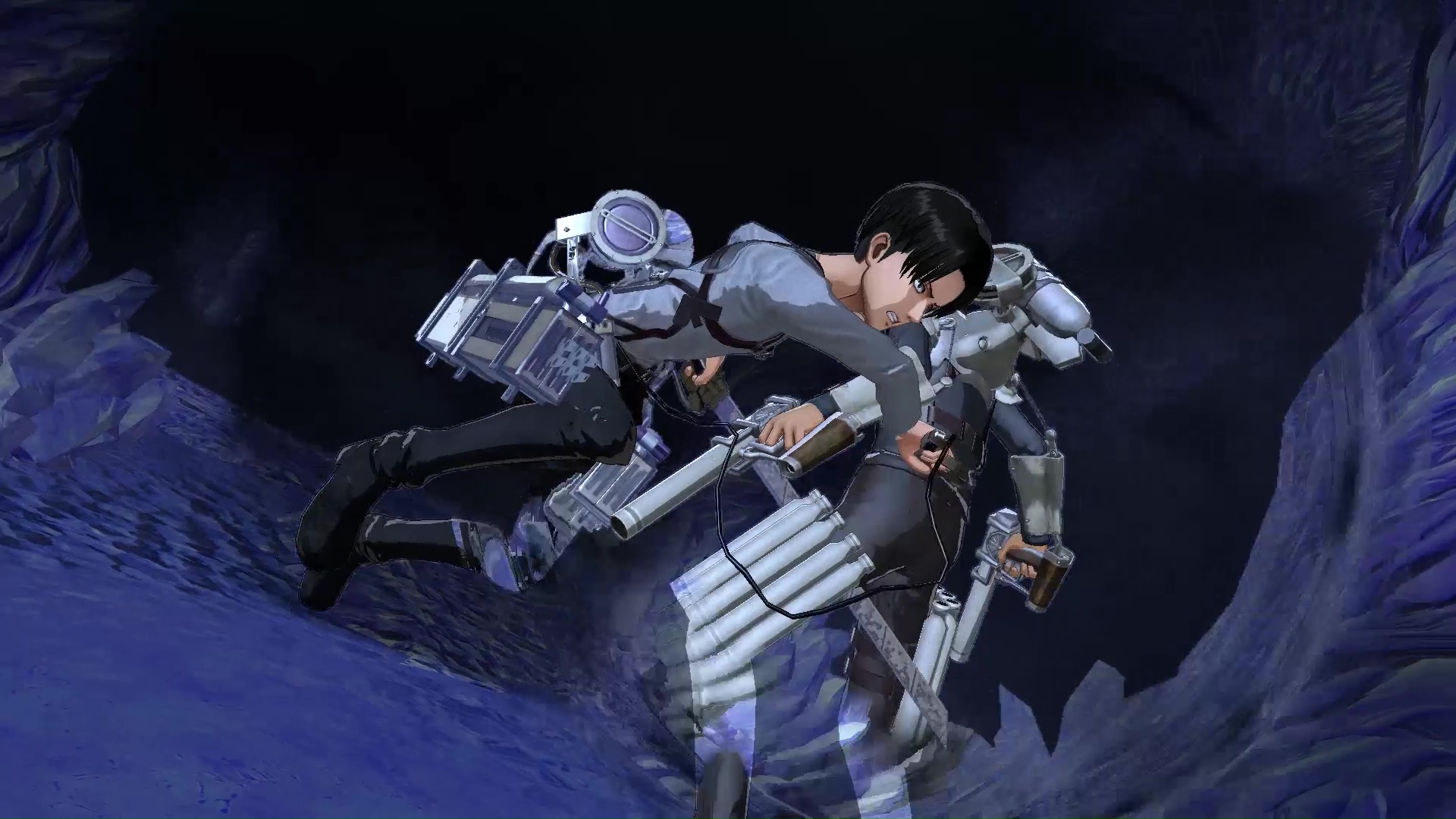 Before leaving, Mr. Suzuki also decided to demonstrate some incredible features that we didn’t know about! Firstly, he showed off a couple of flashy, new additions to the weapons lineup! He revealed a variant of the firearms called the Beam Guns, which were a metallic silver and futuristic blue. Mr. Suzuki tells us all of these weapons were approved by the writers, and encourages players to seek out all the variants of the weapons in the game.

Next, Mr. Suzuki demonstrated the Titan transformations! Some characters who can transform into Titans, such as Eren or Zeke, can become one of the monsters for a brief time. Since he was playing as Zeke, Mr. Suzuki showed off his Beast Titan transformation where he threw rocks at enemies and celebrated with his classic animation, straight out of the anime. It’s clear that attention to detail and appreciation for the source material was prevalent among all levels of staff involved in Final Battle.

Ultimately, I was blown away by just how many solid features were added to the game. Welcome additions that cater from the casual audience, to the hardcore elite, to the devoted fans of the source material will all find something to love in this refined expansion of the base game.

In case you missed it, check out our previous post with videos from the event, and look forward to this weekend’s episode of the Nintendo Everything Podcast (iTunes / Spotify / Stitcher and more ) where I’ll be casually recounting my experience with the game at Koei Tecmo.