– Nintendo finally releasing a new color in North America
– It’s been out in Japan/Europe/Australia
– Nintendo usually holds onto colors until sales slow down
– Comes out next week
– Will include WIi Sports/MotionPlus, still $199.99
– Craig really likes the look of it
– White system will also be sold as a bundle now

END_OF_DOCUMENT_TOKEN_TO_BE_REPLACED

PopCap talks about the 3DS

“I don’t think anyone should write off anything Nintendo does as a gimmick. Nor should they assume anything Nintendo does will be successful. You’re talking about guys who came up with the concept called the Wii, and made it one of the most successful things to get new gamers into gaming. If I had a dollar for every time I had mocked both the controller and the console, I would feel silly, because we’d have lots of money, but we would have been really wrong. However, they also did the Virtual Boy. Everything about that, which seemed cool, wasn’t.

I am excited about it, though, because of what they’ve shown with the DS. I wasn’t a big believer. I thought, ‘Man, the PSP is going to destroy it,’ and I was wrong. And with the Nintendo Wii I thought the name was really bad, but now it doesn’t sound as stupid as when they first announced it. I’ve been proven wrong enough times by Nintendo.” – co-founder John Vechey

“On the other hand, the Wii is really great for everybody, but only Nintendo and a couple of other developers are making money off it.” – PopCap CEO David Roberts

“Nintendo is the only company that’s had great success on the Wii.” – co-founder John Vechey

A lot of people had doubts about the Wii and DS when they were announced. Dual screens? A console called “Wii”? Gradually, Nintendo was able to put much of the skepticism to rest. I have a feeling the same thing will happen with the 3DS.

The DS has sold incredibly well in Japan since it was released in 2004. That doesn’t mean that gamers are necessarily anticipating Nintendo’s next handheld, however.

What about you guys? Are you waiting to hear more about the 3DS before you really consider picking up the handheld? Or are you already convinced that you’ll be buying it when it comes out?

“It’s a surprise – we were expecting it much closer to Christmas. But I suppose it gives Nintendo the opportunity to get it front and centre in people’s minds nice and early. In my experience, you don’t launch a product that early to Christmas unless you’re confident in it – and going to spend a lot of money on it. We’re reassured that Nintendo is going to give it some decent backing in Q4.” – a senior publishing source

It would make sense for Nintendo to release the 3DS in time for the holiday season. And when Nintendo first announced the system, we heard that it will launch before March 2011. I’d like to hear an official confirmation before I fully believe anything, though!

– Jett (main character) can use his jetpack to fly short stick
– Jett explored the planet Yoroppa
– On this he landed Plant by an attack of “Power Posse”.
– There are huge levels to explore and to solve many puzzles.
– Even Action-Parts
– Snow World, a tropical area
– A total of three climate zones
– There are many different levels, different times of day and weather conditions
– In addition to jetpack and parachute, there is also the “Jet Boat” to cross over the sea, or plow with the “Jet-Snowboader” to the snow.
– Developers compare the graphics quality of “Jett Rocket” with that of “Super Mario Galaxy” because they use too many complex shaders
– Worlds and levels have nothing to do with “Super Mario Galaxy” together
– “Jett Rocket” is by the special moves very fresh and different from other platformers. ”
– “Jett Rocket can jump to about twice its height. It can he still use his jet pack. But there are also many gadgets that can make use of them Jett to go to higher regions.”
– “Jett Rocket” controls are more conventional. The Nunchuk is used for the speed and direction and cause the Wii remote buttons to jump and actions. Some of the special moves and actions using the motion sensor, and that makes a lot of fun. However, we did not want the player just shaking the remote control is constantly on. I think we have since found a very good balance. ”
– To the question “When can we expect with the release of the game?
Very soon. I would expect in weeks rather than months.”

Regarding the 3DS: “We are absolutely thrilled by the idea and we are determined to look closer.”

Thanks to Johannes for the news tip!

Posted on 10 years ago by Brian(@NE_Brian) in 3DS, General Nintendo, News | 0 comments 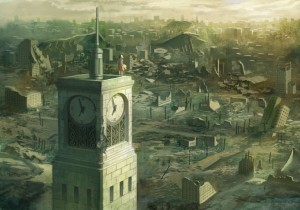 Posted on 10 years ago by Brian(@NE_Brian) in 3DS, General Nintendo, News | 1 Comment

– Concept art has a girl standing at the top of a tower, looking over at a destroyed city, has buildings/streets in ruins
– Director Jiro Ishii: “It has the theme of the calamity that has become a trauma within me.”
– Developed by Level-5’s Tokyo studio
– “time travel” theme is the “ultimate ingredient” for Ishii
– Ishii: “I’ve been thinking about this forever now. Something like Back to the Future and Toki wo Kakeru Shojo, that’s loved forever. I have ideas for a time travel story that no one has done before, not even in movies or novels.”
– Level-5 CEO Akihiro Hino “It looks like it will become a large scale title. I’m also looking forward to it. I expect it to become a title that can be a popular series for Level-5.”
– Hino: “[The game is] centered on hardware that’s not yet in this world, it will expand to other hardware.”

Sounds like this could very well end up on the 3DS. The system is “not yet in this world” as far as I know, but will be in the next year or so!

As promised, Level-5 has revealed a new game in this week’s Famitsu. Kind of. Apparently, the magazine interviewed Level-5 CEO Akihiro Hino in the latest issue, who announced that the company is working on a new game called Time Traveler. The thing is, Hino wouldn’t exactly say what platform it’s for and seemed to avoid revealing further information when the 3DS was brought up.

We’re already aware of the fact that TOSE has been asked to create numerous titles for the 3DS. Is Level-5 working on the system as well? In any case, we’ll let you know more about Time Traveler is any actual game details come in.

The 3DS’ biggest feature will undoubtedly be the system’s ability to output 3D graphics. The system will probably make use of a parallax barrier system in order to achieve these results and now people are beginning to speculate that Hitachi and Sharp will be providing Nintendo with the goods in the form of newly announced 3.4-inch, 480 x 854 screen technology. Interestingly, it will feature both a 2D and 3D mode. A non-touchscreen version of the display will be going into mass production before June while the touchscreen version will follow closely behind. Sharp won’t say at this point if their technology will be featured in the 3DS, but sources such as Nikkei believe that it is likely.