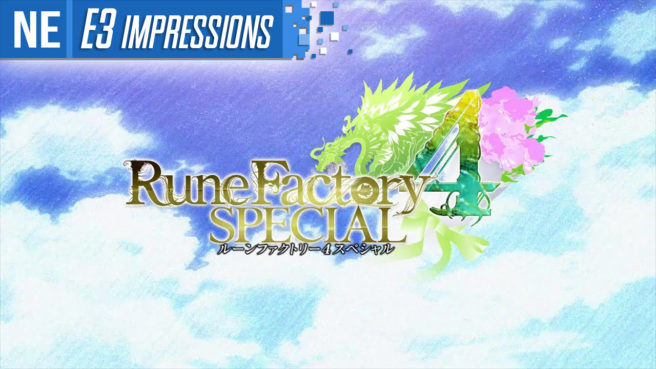 At E3 2019, XSEED kindly invited us to their booth for a behind-closed-doors interview and several gameplay demos for all of their upcoming Switch releases. In part eight of this series, I’ll be taking a look at Rune Factory 4 Special and how the upgraded port stacks up on Nintendo Switch.

You can hear me chatting about all things gaming (and more) on our weekly Nintendo Everything Podcast, available on iTunes, Spotify, and many other platforms.

For detailed impressions of Rune Factory 4 Special, check below the break.

Starting things off, I was a little intimidated. I had not played a game in the Rune Factory series before, though I did know about the many genres it spans. “Where should I start? How can assess this properly?” A quick chat with the QA tester from XSEED who was manning the booth put my worries at ease, as she ushered me through the world. I started off in my garden with all kinds of crops around me. B was for using weapons and tools; A was for harvesting crops. I ended up destroying my crops…  The QA tester informed me that menus have been completely reworked with a lot of quality of life updates. I was pleased with the quick equip menu for changing tools, weapons, magic and more all on the fly. Farming was also quick and efficient: I could stack up to 9 items and harvest them all in one go.

After my control foibles, I took a look around town. Everything had soft, yet vibrant colors that reminded me a lot of the hand-drawn art style of some of Bravely Default‘s environments. The demo featured a full town with many NPCs to talk to, including a Wind Dragon. I decided to get a feel for combat by proceeding to a nearby forest to explore the first dungeon. I had a sword and shield equipped in the demo, but I was told that I could level up weapons to learn different techniques and inputs. In addition to swords, the game would feature several different weapons such as clubs, lances, fists (with which the player can suplex monsters), and all sorts of magic.

I felt that combat was a little floaty and lacked some physical feedback upon landing a hit on enemies. I noticed my character kept moving almost right through enemies as he did his basic slashing combos, which put me in places I didn’t want to be. The sound effects upon hits were nice and chunky, though. The dungeon was full of greenery and hand-drawn details in the environments, which really added to the fantastical setting. The layout was fairly straightforward and didn’t feature many puzzles, at all. There were sometimes rooms with clear conditions, however. The demo only had a “defeat all enemies” condition which also had barriers that produced enemies endlessly until I destroyed them. Many of the enemies in the demo matched the worlds precious aesthetic with their equally cute designs; I was having a bit of a moral struggle fighting them, however the QA tester assured me that there is a story element explaining the hero’s weapons have some sort of magic that “returns enemies home” and doesn’t really kill them. I was super relieved to hear that, so I proceeded to obliterate some adorable bunny creatures that reminded me of the beloved Rabites from the Mana series.

I reached the boss of the dungeon, and I was quite shocked at how hard it was. I died a couple of times, despite being fairly familiar with top down action games like this. The boss was a large, stationary caterpillar for its first stage, but then cocooned and hatched into some kind of fairy for the real fight. The boss had several heavy hitting attacks that were well telegraphed, so even though I had died I definitely felt like I was learning. This told me that although the game weaves “life sim” with “action adventure”, it’s definitely not a walk in the park. After dying, I respawned back in town and had to trek all the way back to the boss – there didn’t seem to be any mid-way warp points in the dungeon. I found this somewhat tedious, but all the barriers that I had cleared on my first trip through stayed cleared. This sped things up, though the enemies did still repopulate.

When respawning, I had to heal myself at the inn’s hot springs. I’m told this usually costs money, but on occasion the inn staff will let the player stay for free; the QA tester told me this is pretty much a random chance. I was happy to see the way dying in battle was handled, as I’m a big fan of punishments for death. I find games that respawn the player with no penalty to lack engagement. The tense situation of defending one’s health bar in combat thrives under punishing conditions.

Of course, the combat is only a slice of what Rune Factory 4 Special offers players. Though I didn’t have time to experience this in the demo, the QA tester informed me that there are relationship stories with six bachelors and six bachelorettes, though there are no options for homosexual romance. Advancing friendship levels high enough with NPCs will permit the player to bring fellow townsfolk on adventures and into battles. The full game will also have a glove tool that allows the player to befriend monsters, raise them in a monster barn and bring them along on explorations.

Overall, Rune Factory 4 Special has a lot of systems, but none of them seem overly complex. With all the different aspects of fantasy life sim on offer, I could tell that this will be a very in-depth game that I could see really being a time sink. The setting and general game-feel felt charming, like a wholesome slice-of-life anime. This is the kind of game that I would have loved when I was younger and in school – back when I couldn’t buy multiple games. Rune Factory 4 Special would have kept me happily busy for months and months.