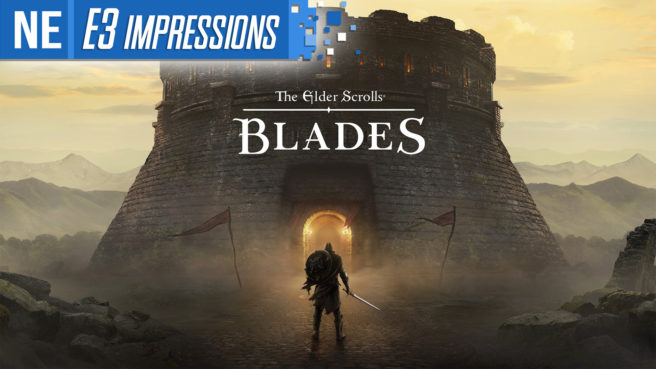 At E3 2019, Bethesda kindly invited us to their booth for a gameplay demo and behind-closed-doors interview for their upcoming Switch release, The Elder Scrolls: Blades. In part seven of this series, I’ll be taking a deeper look at how the experience stacks up on Nintendo Switch with classic button controls.

You can hear me chatting about all things gaming (and more) on our weekly podcast, available on iTunes, Spotify, and many other platforms.

For detailed impressions of The Elder Scrolls: Blades, check below the break.

The Elder Scrolls: Blades is an upcoming entry in the long-running series that takes place after Oblivion, but before Skyrim. With the huge success and cultural zeitgeist of Skyrim, the look of Blades is very Skyrim-esque. In this game, the player will be traveling through a more linear experience than that of mainline Elder Scrolls games, and following a storyline of a member of the Blades, a now outlawed group of bodyguards who once served to protect the Empire of Tamriel.

Being a big fan of Oblivion many years ago on the Xbox 360, I was intrigued by the premise for the narrative. I grabbed hold of the Switch demo unit, which featured the game in handheld mode only, and dived right in. After a splash image of all the controls on display, which was a tad overwhelming, I was thrown right into the world. Blades on the Switch touts traditional button controls only, despite the console having a functioning touch screen. It’s peculiar that the developers aren’t planning on implementing touch controls in the Switch version, but considering how well the button inputs serve the game, I’m not complaining.

There were options for several special attacks on the right face buttons; the demo gave me shield bash, quick strike, and adrenaline dodge. The left face buttons had magic skill: a fireball, lightning bolt, and blizzard armor. As expected, the game did have elemental weaknesses and strengths to consider when fighting enemies, such as spriggans that took big damage from fire. Melee attacks with my sword could be aimed at three heights: high, medium or low. Strangely, holding forward held up my shield to block. Personally, I found this jarring so I hope the final release has options to remap controls or change equipment up to some degree.

Battles in the demo were always one-on-one. Encounters with multiple enemies had the second one waiting patiently in line for his buddy to die first. What happened post-Oblivion that taught monsters manners? And even more importantly, what happened pre-Skyrim that made monsters disregard said manners? Forks on the left, knives on the right, you jerks. Initially I was holding the ZL or ZR button down to ready my sword, then releasing to attack. This worked well on the wolves because they would lunge quite quickly, so being at the ready allowed me to interrupt their attack effectively. This negated any damage and dealt a very satisfying strong blow that knocked wolves away. I quickly learned that enemies fought differently upon encountering a Spriggan. This encouraged different styles of play which kept me engaged as I attempted to learn attack patterns and execute the right skills at the right times. Spriggans blocked my sword often and followed it up with an attack of their own, so I had to adapt. I learned that I could block or parry their attack, dazing them briefly, and could go in for the reprisal. During battle, I couldn’t seem to move around freely or run away from combat either. I also couldn’t get a sneak attack or “first strike” on an enemy, which I found to be disappointing. Hopefully the latter is something that will be in the full game.

I noticed my character in the demo had no limbs when striking – it was just a floating sword and shield. My head-canon was that I was playing as a ghost. Speaking of that, there was a quest marker that led me along my path in the form of a ghostly blue fart cloud. In the demo at least, it felt completely unnecessary. Perhaps this is indicative that the level design will get more complex in the full game, thus making this a helpful feature. Regardless, hopefully there will be a way to toggle this on/off upon release for those who do not want it.

Environments were a bit brighter and more colorful than I recall Skyrim looking. That game was from an era of PS3/360 titles where design was heavily steeped in murky browns and grays. Areas in Blades were well populated with objects that were appropriate for the type of environment, which kept things visually interesting to look at as I passed through. Textures were a little muddy here and there, but nothing that bothered me too much. Environmental lighting was also used nicely, but it didn’t seem to be an active lighting system that changed with the passage of time – at least not in the demo. Generally, things were crisp-looking in handheld mode.

Level design was mostly linear with a few branching paths and secret areas to find, encouraging only a meager amount of exploration, however the tight corridors ensured enemy encounters were difficult to avoid. I found many destroyable objects in the form of tree stumps and such that contained materials and currency. There seemed to be an emphasis on many different kinds of loot to obtain (limestone, lumber, etc). I assume these will be used to improve equipment, build the town and unlock new gameplay – this would naturally encourage the microtransactions that the game is built upon. I found items in the environments that would restore health, as well, in the form of flora and fauna. I encountered a couple of NPCs roaming around who dealt out quests. The quest I completed in the demo was a very standard “Kill X number of Y enemy”. Upon completion I was rewarded a silver chest with materials in it. I’m wondering if this will be a loot box sort of mechanic in the full game.

I couldn’t help but be reminded of two games in particular due to the gameplay. The first was Wizardry: Tale of the Forsaken Land on PS2. Though Blades is not turn-based, it might as well be with how the game encouraged me to fight. The second was the more recent Severed, by DrinkBox Studios of Guacamelee fame. This first-person dungeon crawler came to mind due to the linear nature of Blades.

In terms of performance, there was a fair amount of stutter. I noticed a pattern that the game would play at a pretty consistent 30 frames per second for the majority of the time, but then every once in a while the game would just stop for a second. Not like a frame drop – more like a big, fat pause. There were several times that upon killing an enemy, the game would pause for a half second. It felt more like a programming thing, spurred on by sudden changes in code, so I’m not concerned that they would release the game in that state – it was still an early build.

One final note on the visuals: I found it to be very jarring when the enemy engaged with me. If I was looking at the environment and an enemy approached me without being in my line of sight, the camera would suddenly shift to them. It felt like I was blinking. In that regard, it felt very much like a beta build. It would be nice if there were a very brief animation telling the player that battle will be initiated – at least a smooth head turn instead of just “blinking” in.

Blades looked like Skyrim to a degree, but it played quite differently. The objectives and game-feel were more restricted, which wasn’t necessarily a bad thing, it just felt weird that it “looked like a duck” but “barked like a dog”, so to speak. Everything looked nice and fantastical, and battles were a good balance of difficult and engaging. I don’t think I’ll find Blades to be the most exciting or innovative game, but it could be a good time-waster. Button controls are the main attraction here and a welcome feature, at that. The inputs all felt satisfying and responsive, and I appreciated that I didn’t have to use my finger to play which would block my view of the screen. It definitely needs a little more time in the oven, and with the open-ended “2019” release date, I’m not concerned Bethesda can’t iron out the wrinkles in the experience. Considering this game is built upon microtransactions, though, I’m skeptical that the whole experience won’t be hollow. That said, my demo impressions don’t involve that aspect of the game. So for now, I’ll just keep thinking Blades is about a ghost following other ghosts’ farts to find treasure and kill enemies.