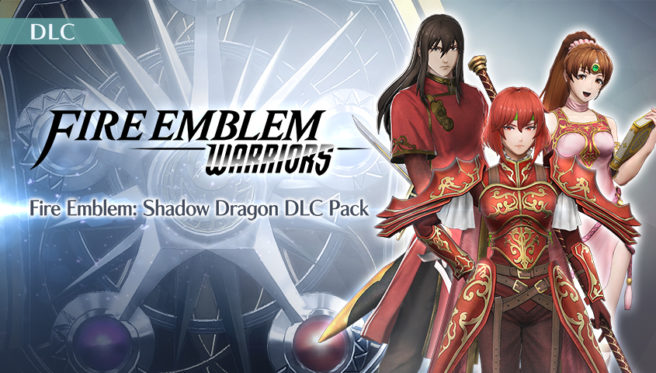 In its latest issue, Japanese magazine Nintendo Dream had a one-on-one talk with director Hiroya Usuda. Usuda spoke about introducing Navarre, Minerva, and Linde as playable characters, the new wedding costumes, and more.

What are the reasons for choosing Navarre, Minerva, and Linde as playable characters?

Navarre already appeared as an NPC, so there’s no reason to not make him playable.

For the next one, the names of the three Pegasus sisters [Whitewings] were also mentioned, but we already have a lot of Pegasus Knights here, so we went with their leader Minerva. And we also had another reason to add an Axe character to balance the weapon types. We added Minerva because she’s coming from Shadow Dragon, wields an Axe, and we can also add a Wyvern Rider by including her.

And for the third one we thought of a magic tome user, and we also talked about Nyna as a curveball. But we picked Linde since we can reproduce magic spells from the original games like the Aura. We also had Jagen, Draug, Gordin, Merric, Abel, and Cain as other candidates, but when we think of weapon balance, we couldn’t pick just one from them, so we ended up omitting the Altean characters.

On producing [Navarre]; points you had trouble with and what to look from him

Navarre is getting in to fill the Mercenary slot. There was a debate on whether to pick him or Ogma, but we wanted to have that scene from Devil Mountain in History Mode, and that’s a big factor. It’s not an over-exaggeration to say that we thought of History Mode just for that. In Fire Emblem Warriors’ design document it was written as a mode where we have the following conversation: “Lend your sword to our cause. Or, if you will not, then turn it on me now instead.” “…Nay, I’ll turn no blade of mine on a woman.” (laughs)

When producing Navarre, we had problems with his conversation scenes. While he did have a number of lines in the main story, he really doesn’t get friendly with everyone and stays cool from beginning to end even in support conversations. While he only has a few undulations of emotions, Navarre has his own way of deepening bonds so I’ll be glad if you can notice that.

I think another point worth seeing from Navarre is the exhilarating sense from him exterminating enemies with quick swordplay, just like Lyn. Action-wise he’s also a very strong character, so I’d like you to have a solitary journey as Navarre with his skill Lone Wolf equipped.

Behind-the-scenes talks for Minerva, the character with the highest Strength

We produced Minerva while really considering her warrior look as the Red Dragon Knight and her elegance as the princess of Macedon. At first we did things like writing her lines and designing her with a bit more emphasis towards elegance, but it just couldn’t fit well so we ended up focusing on her warrior look the most. She already had a new illustration in the iOS/Android game Fire Emblem Heroes, so we also based our design on that a bit. As for her weapon, she is using the Hauteclere from Shadow Dragon, and for her Awakening Special she uses a spear designed from the Dragon Lance.

When we referred to Minerva’s parameters from the original game, she ended up having the lowest Magic stat in the army, but in exchange to that she has the highest Strength stat ever. So she is a character recommended to those who believe Strength is everything.

I think Linde’s selling point is that she has sexy feet, so we designed her with careful consideration to what she wears under her robe based on reflection points we had in the main story. We had a challenge on how far we can shake the robe, but we can’t expose her too much either so this is what we ended up with. And I think her other appeal point is being bright and living positively despite having a difficult past, so I’ll be glad if you can notice that in her support conversations.

When Linde unleashes Aura in event scenes and special attacks, the robe hem holds on; this reproduction is a fixation from the staff members. Her actions also use magic spells that weren’t here before like Starlight, Nosferatu (Resire in JP), and Blizzard, so please take a deep look at them too.

Why did you choose these maps from the original game [for History Mode]?

A: First of all for Devil Mountain (A Brush in the Teeth), I think we really needed to make this map without even being told. This is the map where Navarre joined you in the original game, and he also had that famous conversation with Caeda. I already said it before, but we thought up of History Mode itself just because we want to reproduce this scene.

The next one, Princess Minerva, is the map where Minerva joined you. We gathered and structured the conversations, not only when she joined you or when the map is cleared but also other conversations, in a way so that you can understand how Minerva becomes a [real] human.

Knorda Market is also the map where Linde joined you in the original game. Speaking of which, Linde joined you in the next chapter right after Minerva joined. We also gathered and structured the conversations while basing on the flowchart of the original chapter so that you could understand Linde’s characteristics. There are only a few characters from Shadow Dragon so we had to pick substitutes, but I rather like how we made the substitutions for Jake and the Ruffian.

Bride and Groom… Please tell us about these extra costumes!

We simply wanted to have Caeda wear her bride costume, and we also want to see Caeda and Marth wearing their finest costumes as the only official couple. Heroes also had the Bride Caeda, but there was no Tuxedo Marth. That’s why we asked Intelligent Systems to let us make a Groom costume for Marth.

Furthermore, as an attendant to that [wedding], we’d also like to give a cute dress to Tiki. That’s why we also prepared an extra costume for her. We designed Tiki’s colored dress with a theme of “just cute” and also with a meaning to celebrate the two (Marth and Caeda’s marriage).

Finally, [let’s hear about] other points worth seeing!

In this second DLC batch, the long-anticipated Iote’s Shield is added as Minerva’s skill. With this, other flying units should also have a much broader range of activity. Navarre’s Lone Wolf can also be always used by people who attack multiple bases without pairing up, and Linde’s Quick Wit should also be useful to Bow and Magic characters as they’ll have an alternate method to fill their Awakening gauge other than just relying on recovery items.

Other than that, we also made detailed fixes like fixing bugs/issues, adding an icon to indicate characters that can use staves, and making it easier to access each kind of information in the unit advance screen. We’re finally able to fix the bug where closing the pause menu would suddenly change the player character on its own. In the future we’d like to continue answering everyone’s requests as much as we can, so please keep on supporting Fire Emblem Warriors.

Thanks for making it to the end of this post! If you use any of this translation, please be sure to source Nintendo Everything. Do not copy its full contents.