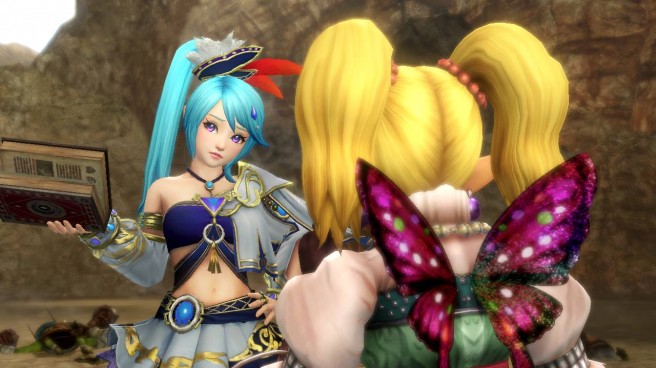 Nintendo shared a bunch of Hyrule Warriors information concerning Lana, Agitha, Argorok, and Zant over on its Facebook page. You can check out the full details below.

Lana is sorceress with a deep knowledge of spells, monsters, and using spells on monsters. She’s very energetic and ready to give the war for Hyrule everything she’s got.

Lana and Cia have an unspoken hostility, even beyond the normal anger that war brings out. Lana is fiercely determined to put a halt to Cia’s plans, even at the cost of her own life or happiness.

Don’t underestimate Lana just because she’s usually so optimistic! Her natural athletic energy serves her well and allows her to quickly dive around her enemies and attack with her book of sorcery, which utilizes electrifying spells that her enemies never see coming.

While searching for the Gate of Souls, Lana takes a detour to rescue Agitha from a horde of monsters, ultimately recruiting her to the greater cause.

Agitha is the self-proclaimed princess of the insect kingdom, late of the Era of Twilight.

Agitha keeps a bright smile on at all times and looks at the world through a sweeter lens than her allies. But just because she’s so cheery doesn’t excuse her from battle!

Agitha’s parasol is her standard weapon, though her real strength resides in the bugs she summons forth in times of need, such as a giant beetle or a magnificent butterfly. Never underestimate the power of an insect princess!

Last seen as the boss of the City in the Sky from Twilight Princess, Argorok is a powerful Twilit Dragon enhanced by a Mirror Shard from the Mirror of Twilight.

His entire body is covered with hard armor, giving him extremely high defense. Surprisingly, he has a far higher bit of intelligence compared to the usual dragons that fly around Hyrule, shown mainly with his tactic of attacking from a vantage point high above the battlefield where normal soldiers can’t reach him.

Zant is the usurper king of the Twilight Realm. Once Cia used the Gate of Souls to open a portal to his era, Zant was free to continue his shadowy misdeeds in Hyrule and beyond.

Dual-wielding scimitars is Zant’s style, allowing him to swing wildly about or dash with intent toward his enemies. He also possesses a great deal of magical attacks, so approach him with extreme caution.