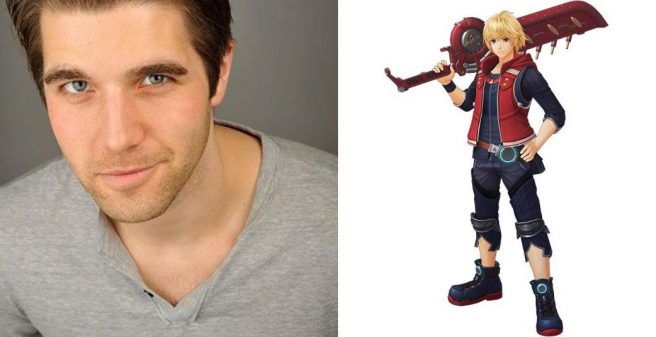 It’s been six years since we last caught up with Adam Howden, the voice of Shulk. A lot has happened with the Xenoblade series since then – including a new version of the very original Wii game for Switch.

We felt that with Xenoblade Chronicles: Definitive Edition having released earlier in the year, now would be a great time to catch up with Howden once again. It’s a particularly good time since Howden contributed to the game in a big way. Xenoblade Chronicles: Definitive Edition features a brand new epilogue, Future Connected, focused on Melia and Shulk.

You can read our full interview below. Note that the discussion contains some spoiler-related information pertaining to the series, but we’ve labeled that part at the very end and separated it from the rest of the interview.

It’s been close to a decade since you first voiced Shulk in Xenoblade Chronicles. What was it like coming back to the character for Future Connected and playing that role again after so many years?

Always a pleasure, never a chore. It’s great that Nintendo keep finding ways to continue the story. It was 2011 when I first recorded XC and even though that’s nearly 10 years ago the time has flown by. The worry for me was “does my voice still sound the same?” Luckily my voice doesn’t age the same as the rest of me.

Do you remember when you got the call to return? How long did the whole recording process of Future Connected take?

When I get called in to do games it’s always quite vague. Exciting though. My agent said I’d be doing some recording on *code name* and that I’ll be reprising my role as Shulk.

I do sometimes get sent the script beforehand but it’s often out of context, so it’s not until I’m in the studio that the director/producer can fill me in on the details. Future Connected didn’t actually take long to record for me, but Shulk was more of a supporting role this time around.

When you found out about the project, were you surprised at all to learn that the first Xenoblade Chronicles was coming back and was even getting a new epilogue?

Yeah I was surprised, but really pleased because it meant the original game got a new lease of life. Hopefully they’ll make more epilogues.

Even though it’s been so many years since Xenoblade Chronicles initially released, did coming back to Shulk feel natural? Did you look back at the original game at all to see how you first played Shulk before recording?

As I said before, when revisiting Shulk my only real concern is whether or not my voice has changed over time. Other than that it’s like seeing an old friend and picking up where we left off.

I always have a look back at bits from the original game as a reference and we do some voice matching in the studio to ensure the voice is consistent.

Do you remember if there were any differences in the recording process for Future Connected compared to when you originally recorded for Xenoblade Chronicles?

The main difference is that Future Connected was recorded in a different studio with a different team. The voice director was the director of Xenoblade Chronicles 2. I guess we could work a bit quicker also, because we know the world of these characters so well now, whereas with XC we were starting from scratch and slowly working out what this world is.

Have you been surprised at all to see Shulk continue to pop up over the years? After the main game’s release, he’s been in Smash Bros., Xenoblade Chronicles 2 (as DLC), and now Future Connected with a brand new story.

As an actor you get used to saying goodbye to characters and then moving on. It’s really heart warming that he’s such a popular character and that he keeps on turning up in other stories.

Xenoblade has come a long way since its initial release with multiple games, and it’s almost become a flagship Nintendo IP at this point as a million-seller series. What has it been like, as someone who’s been there since the beginning and has been so involved, to see the franchise grow into something so successful with Shulk himself rising in popularity over the years?

I’m pleased that the franchise has grown in popularity and obviously it’s lovely that Shulk is so liked. Let’s hope that continues.

You’ve been involved in every Xenoblade game up to this point in one way or another. How does it feel to have played such a major part in the series?

It’s been an honor really. So many people work on these games behind the scenes and they don’t get enough credit. I’m lucky that my voice was the right fit for Shulk. The rest is down to the stories, which have proved to be really popular.

We asked you about this last time, so it only feels right to ask again: if given the chance, would you want to continue playing Shulk down the road (or continue returning to the Xenoblade series in general)?

One question just for fun: if you could voice a character from any other Nintendo game, who would you pick?

Waluigi. I wish I could do that voice. It’s such a naughty voice.

Is there anything else you want to share with fans? Where can fans of your work follow you?

Whenever I’m allowed to talk about any projects I’m in I generally say on Twitter. My handle is @A_HOWDZ

Bonus – for those that have completed Xenoblade Chronicles 2 only

Before Future Connected, you also had a fairly big role in Xenoblade Chronicles 2 as the Architect. It’s been a few years now, but what do you remember from working on the game and voicing that character?

I was essentially being asked to be the voice of God as the Architect. That’s quite a challenge. What does a God sound like? On a very basic level I had to force myself to speak very slowly and allow myself to really consider every word I was saying as I was saying it, in order to show the Architect’s gravitas and omnipotence. I naturally speak a lot quicker and with a lighter energy.

We had discussions about it in the studio, but I think it a lot of it boiled down to the different energies of the characters. Zanza was more youthful and the Architect needed to sound like he could be the same person but older and more world weary.