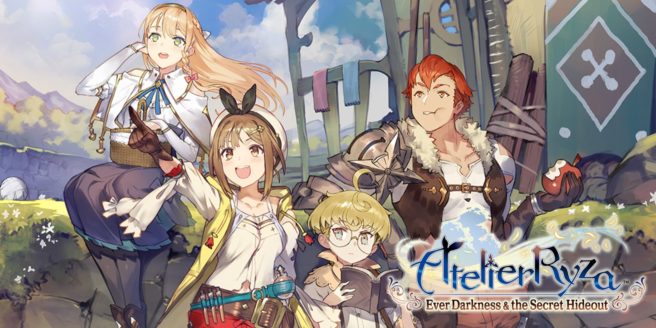 Atelier Ryza is the next entry in the long-running Atelier series, and it’s a pretty significant one at that. It’s true that the franchise gets new games regularly, but this addition is taking a bit of a different approach. Gust reworked the game’s visuals, battle system, and more.

In an interview with Nintendo Everything, producer Junzo Hosoi spoke more about Atelier Ryza, supporting Switch, and what possibilities lie ahead for the future. You can find our full discussion below.

Atelier Ryza has a new, more realistic art style compared to previous entries in the series. How did the team settle on this updated look?

We decided to take a realistic approach instead of continuing on with the way the game has looked from the Arland series – to really take a new approach to it – especially since it’s a new entry in the series. We wanted to really give it something new – a new look as well, so we really looked at the lighting and the shadows and the graphical elements. Also for the design of the characters, we decided to change the way that the characters are designed, and with a new look to the character. The way the field is represented in the game will change as well.

Up until now, there haven’t really been many seasonal elements in the Atelier series, but in this game the theme is like one summer’s memories. The theme is based in summer, so because of that, it really made the colors pop. We really concentrated on the contrasting colors.

How has the battle system been updated this time around? Battles almost seem like they have a bit more of an action feel.

Up until now, we really used a turn-based battle system. We’re finding that it’s something that’s not so popular, so we decided to take a real-time battle system approach in this game.

What’s the design process like for each protagonist of the Atelier series? Each one is unique and easily identifiable with their respective entry.

In this case, the setting is that she’s a farmer’s daughter, but then we thought, “Well a skirt and farming – that doesn’t go well together.” We don’t really want their underwear showing as well. So we decided to go with the short-shorts. The other aspect is that because it’s summer – that’s the theme – so that’s how we came up with the design.

Our approach was to make a cute character without any sexual innuendo whatsoever. Everyone sort of looks at her as sort of being sexy, and that’s completely not how we look at her, so that really caught us by surprise. (Laughs)

Usually Atelier is a “coming of age” story, but have you considered a possible storyline that’s more focused on adulthood and being in the shoes of someone who mentors another?

It’s something that we can’t say we’ve never thought of before, but one of the key features of the Atelier series has been a girl’s coming of age story and how she matures, so we usually then don’t look at what happens after they’ve matured. Have we thought of it? We’re not exactly so sure. We’re actually thinking about with how to proceed with this series – whether it’s Ryza, this is her coming of age story in this game. What happens next? Maybe we might take a look at that in the next game, or maybe she might be a mentor to a younger character. We don’t really know.

On that note, we’re also kind of reviewing what the so-called rules of the Atelier series are. We might look to change some of those aspects as well. Everything is quite up in the air. We can’t say we’ve never thought about it, but we don’t really know what we’ll do.

With the Harry Potter series, it always focuses on Harry Potter. So what happens if Harry Potter is not the main character? What happens without him? So that might be an approach we might look at. It’s still the same world as Ryza, but she may not be the one that’s the main focus.

Atelier Rorona, Totori, and Meruru were previously brought to Switch after they originally appeared on other platforms. Do you have any interest in porting over any other older Atelier games?

It is something we’re thinking of, and we might find out at this Tokyo Game Show. (Laughs)

Atelier has had a fairly frequent release schedule. Are teams spread out to work on multiple projects at once that allow for the games to be made so quickly? Does Gust ever worry about coming up with new ideas?

For the Gust brand, we actually have two development lines, and one of the lines is located in Kyoto and they actually worked on Nelke and the main Gust team in Nagano worked on Ryza as well as Lulua.

Actually with three titles, we’ve gotten to think that the concepts are quite distinct. With Nelke, it was sort of a 20th anniversary celebration title. Atelier started out more of a simulation-type game especially with Marie having the most simulation-type aspects, so we thought, “Let’s bring Nelke back to the sort of the roots of the Atelier games.” So that’s what we did with that game. With Lulua, it took aspects of the Arland series as well as the Dusk series, so we thought that we kind of made a system that was a perfect base from that. We thought that we really improved on that, and that was sort of the final chapter in that area. With Ryza, this is a completely new series for Atelier, so we started from zero. Since we started from zero, we had a lot of options. All of these three titles had quite different concepts.

How have you found it developing for Switch? Have you encountered any notable challenges?

We definitely want to bring out the same product as for the PS4. Looking from the graphics aspect, being able to come up with the visual representation and especially the frame rate, we’ve found that to be challenging.

With the PS4’s buttons on the controller – circle, square, cross and triangle – they have colors associated with them. We usually use those colors also within the game to associate certain buttons, but with the Switch’s – A, B, X, Y – there aren’t any colors associated. They’re all a single color. So we’ve had some challenges in terms of representing that.

Are you pleased with how the Atelier games have been selling on Switch?

The first title that we released on Switch was Atelier Lydie, and after that Nelke and also Lulua. We’ve been finding that with each successive title it’s been increasing, so we do find that this is a good platform for us to have expanded onto. And the fact that you get to just lay around and play is great.

Is there anything you want to say specifically to the Nintendo fans of the Atelier series? Is there something you really love about the game?

We think that with Atelier Ryza on the Switch, we’ve really improved the graphics and we were able to create a brand new game experience that everyone will enjoy. So Switch users can rest assured that this is a high quality effort. We think it’s a great game. And we also want to thank the Switch users for their continuous support of the Atelier series.