[Interview] BlitWorks on porting games to Wii U – Super Meat Boy, Axiom Verge, The Next Penelope 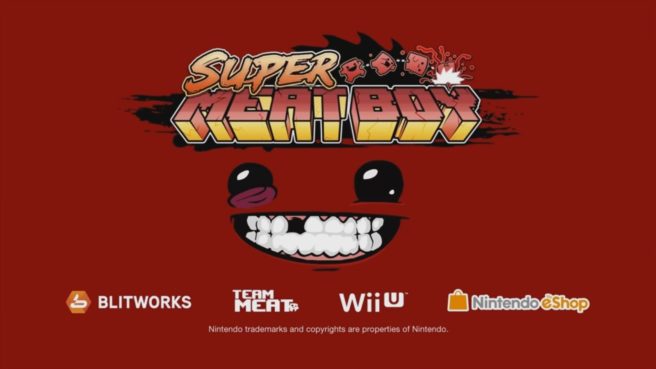 BlitWorks has ported some big indie titles to Wii U. The studio just brought Super Meat Boy to the eShop last month, and previously worked on Don’t Starve as well as Badland. They’re not stopping there though. BlitWorks is currently cooking up Wii U versions of the Metroid-esque Axiom Verge and the F-Zero-inspired racer The Next Penelope.

We recently caught up with BlitWorks co-founder Ángel Horna to learn more about BlitWorks and what it’s like porting games to Wii U. Horna spoke about why the eShop version of Super Meat Boy wasn’t an entirely easy task (and how it came about in the first place), gave updates on The Next Penelope as well as Axiom Verge, and much more.

Head past the break for our full discussion.

To start out, can you introduce yourself and tell us a bit more about BlitWorks?

Sure, I’m Miguel Ángel Horna, alias ElSemi, and I am one of the co­founders of BlitWorks and the Tech Lead.

What later would become BlitWorks started with a friend and me, both sharing long experiences writing console and arcade emulators (System 32, the Mega Drive, the Dreamcast, NeoGeo, Capcom System II & III and Sega Model 2). This hobby work put us in contact with people at Sega and our relationship grew over time.

At some point, due to our expertise with consoles, we were offered to do a port of the Sonic CD remake that was already being done by Christian Whitehead. This was when we decided to join forces with other friends and start BlitWorks.

After Sonic CD and Jet Set Radio, we started getting more inquiries, so we realised there was definitely a need that we were covering, and we decided it was worth focusing on game porting with the two values that made the initial ports a success: strong lowlevel programming skills and console knowledge? and of course a love for games that make us polish every port as if it was our own game.

Over time, we have been adding more services like publishing and remakes. Although it’s difficult to say what is a remake and what is a port, because there’s a fine line between them.

What’s the process usually like in terms of securing port projects? Do the original creators generally reach out to you in hopes of seeing their games on more platforms, or are you more proactive in reaching out to these developers?

It works both ways. After Jet Set Radio we started getting inquiries and with FEZ and Spelunky we’ve became well known specially in the indie community for the good quality of our ports. Many developers or publishers come to us recommended by others. But that doesn’t stop us from contacting developers when we see something we believe would be interesting to port to other platforms.

When porting games to Wii U, how do you incorporate the unique hardware with games that weren’t specifically designed for the console?

We always need to figure out the best way to adapt each game to the target platform in order to take advantage of the peculiarities of each system and to make the game feel like it belongs there. Games are built and tested for a specific platform, and when you move to a different platform, different challenges arise that can affect the game in ways that are hard to predict.

The most common ones are controls that need to be tweaked for the platform (touch, sticks, button remapping, vibration), UIs that have to be adapted to the screen size, resolution and input methods (for example changing a touch based UI to a controller based one is not an easy task.) Text and localizations have to be revised and updated to the platform naming conventions. Also with the resolution change, all texts have to be tested so they fit in their given space and they are readable in all resolutions. In short, it takes a lot of iterations and a lot of testing to get a good result.

The Wii U version of Super Meat Boy was your most recent project. How did that partnership come about? Did you encounter any notable issues during development?

We were working with Team Meat on the PS4/PSVita version of Super Meat Boy and we suggested porting it to Wii U as well. We’ve had a very good relationship so far, and they’re really happy with the way we’ve taken care of the ports.

Super Meat Boy may look like a simple game, or at least, a game that you could easily run at 60fps everywhere. But the reality (as in almost any other game we’ve worked with) is that games are the result of a creative process and the resulting code is not written in the most efficient way. So in order to get the game running at 60fps on the Wii U at 1080p, we had to optimize the subtle lighting effects rendering code, tuning it for what the game was exactly using.

In an announcement regarding the release date for Super Meat Boy on Wii U, there seemed to be a tease regarding a 3DS version. Would you happen to know anything about that?

Super Meat Boy is the kind of great game that should be ported to every available platform, but there is nothing we can confirm about a 3DS version for the moment.

We’re aware that BlitWorks is handling the Wii U version of The Next Penelope. How’s that coming along?

The Next Penelope is quite a big project, as the original game was created using Construct 2 which is based in HTML5, the code must be totally rewritten from scratch to C++ in order to make it work in consoles. We are working on it but we cannot give more details for now.

You’re also working on the Axiom Verge Wii U port. We had heard there were potential issues in bringing the title over since it was originally made with the MonoGame engine. How have you been able to overcome that?

Fortunately, we have developed a semi­automatic tool to convert the code from C# to C++, Unsharper. Using this tool the workload of the conversion is incredibly reduced. We started this tool because when we ported FEZ, we used an already existing tool for converting from C# to C++. This tool missed some features, and we had to finish the port manually by filling the gaps in the generated code. But with bigger games this way would have been impossible so we needed to automate the conversion. The manual part is still there, but it’s not the same amount of work we did with FEZ which was very, very time consuming.

BlitWorks has been involved with several Wii U titles at this point. How has it been working with the hardware?

Working with the Wii U hardware has been an interesting job, you always learn from each platform you work with and adapt to its capabilities and take advantage of its strengths. Being specialized in game porting as we are, it is crucial to know deeply each console.

Since BlitWorks is porting these games on the Wii U, is Nintendo involved in the process in any way? If so, how has it been working with them?

Yes, Nintendo is involved in the process and they have been incredibly helpful. They were always available for questions and suggestions and supported the project all along.

Are there any games that you personally would be interested in porting to Wii U?

Two games we know that have a lot of fans and a large amount of requests to be remastered for Wii U are the two Super Mario Galaxy games and F­Zero GX. There’s no doubt they would look impressive in HD. On the indie side I would say FEZ and Undertale, both would fit wonderfully in the console’s catalog.

Aside from Axiom Verge and The Next Penelope, do you have any other Nintendo projects in development? Do you have any interest in 3DS ports?

We do have other Wii U projects on the pipeline, but we can never reveal them. This is always a delicate matter and publishers are the ones who choose the right moment to do so.

Well, we’re really looking forward to discovering the NX and to start porting games to it!

Nintendo Everything would like to give a big thanks to Ángel Horna and BlitWorks as a whole for participating in the interview and taking the time to answer our questions!