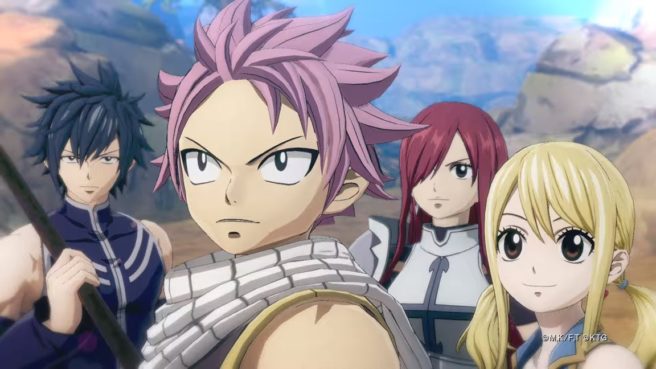 We recently spoke with Keisuke Kikuchi, the producer of the Fairy Tail RPG heading to Switch in 2020. Aside from discussing topics like how long the game will be and talk about DLC, Kikuchi also expressed interest in wanting to turn this into a franchise when we asked about the possibility of original characters.

Here’s our full discussion with Kikuchi:

What is the intended length of this game?

As far as the main story and side stories go, the intended play length is around 30 hours. But if you really dive into some of the side quests as well as post-ending features, then it could easily add up to 50 – maybe 80 – hours.

How do players obtain members from other guilds in the game?

First of all, there are only a handful of characters that are playable from other guilds. Conditions need to be met in order to recruit them. There are some variations. But just to share with you one example, as you progress in the story, at a certain point, when they become available for recruiting, you might have to complete certain character episodes in order to enlist them as one of your party members. But that’s one example.

In terms of the affinity system, for characters that naturally have a strong affinity like Lucy and Natsu, will there be a special story or affinity bonus for characters like that?

Before we get into the affinity system, we’re trying to represent characters as vividly and faithfully to the original canon as possible. There will be episodes that show their character and personality. Whether it’s taken from the original canon or if we took some liberties, there is that.

In terms of the affinity system where you develop bonds with the characters, the stronger the bond is, it feeds back to combat performance. So in that sense you can have two unlikely characters develop relationships and shape your own team.

Is Happy a playable character? Does he participate in fights somehow?

First of all, no you cannot play as Happy. But we all know about his involvement in the franchise. He will partake in battle in some shape or form. I’m not going to tell you the details, but as you develop the guild, when certain conditions are met, he will take part in battles.

The short answer is no, there aren’t any original characters because there are so many characters in the world of Fairy Tail already, and the team is trying to add as many characters as we can. So instead of creating a new one, it makes more sense to just bring more characters in to our players. But it is my strong wish to turn this game into a franchise if possible, so maybe in the future – in the sequel – we’ll be able to take more liberty and have more originality in the game where new characters might just happen.

Are there any plans to offer a dub for the western release?

There are no such plans as of right now, but players can rest assured that the original anime voice actors and actresses will perform again for this game.

Koei Tecmo often expands the content of their game with DLC. Are there any plans for DLC for this release?

So yes, it is our wish for players to play this game for an extended period, so there will be DLC, and we are planning for that, however we’re really focusing on the main game right now. As far as characters go, we’ve already announced seven playable characters and more characters from other guilds will be disclosed in November. From the planned characters, we also received requests from Mashima-san for certain characters to be included in the game. We might not make it happen in time for launch, but even afterwards we’ll try to obviously make that happen. Not just the characters, but also maps and certain other elements will be expanded as well.

You’ll be able to play the new Fairy Tail RPG for Switch when it launches on March 20, 2020.