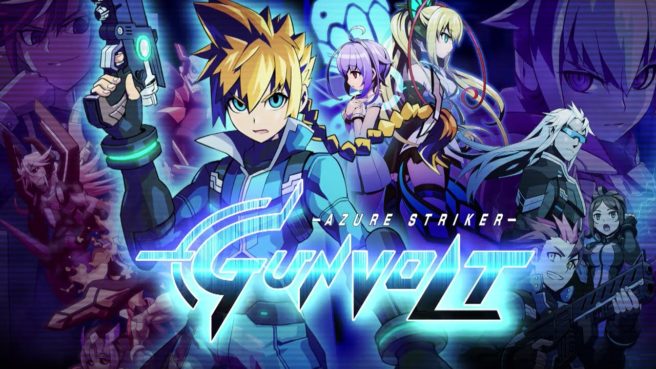 Were there any ideas scrapped from Azure Striker Gunvolt 2 that you can share with us?

Tsuda: In the earlier days of Gunvolt 2’s development, we originally going to make Copen the only playable character, with a mask-wearing Gunvolt appearing as the new top dog of the Sumeragi Group (the evil organization from Gunvolt 1). He would be in the game as a boss character, appearing before Copen in mid-air surrounded by 1000 Glaives that he would use to transform. If you beat Gunvolt, he would be unlocked as a playable character, but due to varying circumstances we changed things to what you see in the game now.

There was another big idea that we had that we unfortunately had to scrap. For Copen’s robot companion Lola, we were going to have her completely change her design in her humanoid form (instead of her robo-ball form) whenever she changes the EX Weapon she is using. She could get a ponytail, long hair, completely different outfits, and more; even changes to her voice. Unfortunately, the workload for that was just too much, so we scrapped that idea.

When Azure Striker Gunvolt launched, Mighty Gunvolt was also created as a promotion of sorts. Have you given any consideration to creating a follow-up, or was that just a one-time thing?

Aizu: We thought about making a sequel to Mighty Gunvolt, but this time around, we decided to go with a physical package instead. Our team is pretty small, so it was a bit unrealistic for us to pull off Mighty Gunvolt 2 and do everything we need to do to make a physical version happen. However, there are a lot of people here at Inti Creates who want to make Mighty Gunvolt 2, so I think that you will be able to play this game someday. We hope you are looking forward to such a day.

Tsuda: This has nothing to really do with the question, but in the new Kamen Rider series there was a game called “Mighty Action X”. That would be really cool if we could do a collab with them sometime.

Azure Striker Gunvolt 2 is included in Nintendo’s Nindies Summer Jam. How did that opportunity come about?

Aizu: It just so happened that we were releasing Gunvolt 2 during the time period they were going to run the Nindies Summer Jam promotion, so the marketing team from Nintendo of America reached out to us. We were definitely excited to be a part of the promotion, so we jumped right in.

Have you ever considered producing a Gunvolt amiibo?

Tsuda: Even though we begged on our hands and knees (ok, maybe not that much) to make the possibility of being able to include a Gunvolt amiibo with a special edition release of the Guvolt Striker Pack happen, our wishes smacked headfirst into the wall of reality and didn’t end up coming true. I will keep the dream alive of one day being able to put a Gunvolt amiibo inside one of those plasma globes, though.

Azure Striker Gunvolt is getting an anime OVA. Can you talk about where the idea for that originated? Are you looking into other multimedia opportunities for the series?

Tsuda: My ultimate goal is for Gunvolt to not fight against Sumeragi or Eden, but rather Kirito from Sword Art Online or Mikoto Misaka from A Certain Scientific Railgun.

As creators, if we put every single thing we wanted to express into the game, the amount of non-action conversation sequences would increase dramatically, which isn’t necessarily good for an action game like Gunvolt, as it would totally kill the tempo of the game. There is a lot of story from the Azure Striker Gunvolt universe that is not included in the games. So, we thought of the best way to deliver this content to everyone, and the consensus that the team here in Japan came to was something we were all very familiar with: anime.

In Japan, we’re selling Lumen vocal albums, holding live concerts, creating 4-panel style manga and short novels. In addition to the anime, we are carefully considering how we can share content with Gunvolt fans outside of Japan too, so we hope to give you many things to look forward to.

Tsuda: I’m really happy that people want the series to continue, and if possible, I definitely want to make a game that continues the series with Gunvolt at the helm as the main protagonist. If a lot of players like the game, put love into the series, and express their desire for a sequel, the conditions it will take to meet those demands is something we are very much thinking about.

Personally, I have kind of a rough idea for what I would want the potential sequel to be, but at the same time, I would love to hear from those who played Gunvolt 2 to its conclusion and see what they would love to see in a sequel.

Aizu: The Azure Striker Gunvolt series is incredibly near and dear to us. It takes a lot of time to make a game that is both polished and a lot of fun, so any discussions about when the next game will be coming out are probably a pretty long way away.

Support from everyone is what gives us strength to keep making games, so we hope that you guys will continue to support us.

Nintendo Everything would like to thank Mr. Tsuda and Mr. Aizu for taking the time to answer our questions. This interview also wouldn’t be possible without the assistance from David D’Angelo and Yacht Club Games.