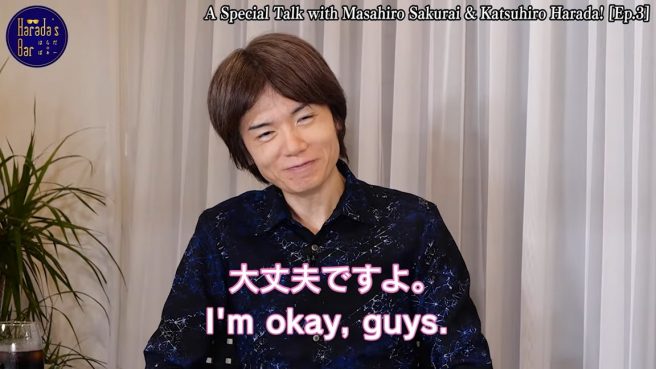 The third portion of the Harada’s Bar interview series with Smash Bros. director Masahiro Sakurai continued today with topics such as his health and the 3DS game Kid Icarus: Uprising.

Regarding his health, Sakurai actually says he’s fine right now. He spoke about some problems with his shoulder that took quite some time to get better, but it looks like that has now cleared up.

“I’m okay, guys. There was a time where I had a problem with my shoulder. It was years ago and it’s fine now. People at my age are more likely to get stiff shoulders. In many cases, the cause is unknown. But in my case the cause was clear, which was calcific tendinitis. When I got an X-Ray I saw these lime water-looking rice grains in there. I asked if they can do surgery but they didn’t recommend it. It took a lot of time to go away though. When it hurt I had a block injection. Thank you, everyone, sorry for the trouble.”

Outside of his health, talk regarding 3DS’ Kid Icarus: Uprising came about when Masahiro Sakurai and Bandai Namco’s Katsuhiro Harada were discussing where the gaming industry is going. That led Sakurai to reflect about how the project was partially inspired by Nintendo’s Touch! Generations brand.

“Kid Icarus: Uprising, we just talked about. The original plan was based on a new hardware, the 3DS, that was coming. At that time Touch! Generations was popular on DS. Touch! Generations is a general term for small software games like brain training. They were different from ordinary games but they gave you many benefits and were good for short periods of play such as Kotoba no Puzzle: Mojipittan. That was one of the Touch! Generations games. While there were those things I thought the trend would continue. So I wanted to make something that will allow you to play games thoroughly. That’s how I planned Kid Icarus: Uprising. Although we decided to use the Kid Icarus IP after the fact, we already had that framework down before that. It was after the framework was laid but of course it was also a part of the original plan. We were going to make a third-person shooter because the 3DS had a depth feature. But the screen is small so the depth was limited too. That’s why we didn’t make it a battle between a person and the person. We made the opponents many times bigger.”

Many fans have expressed interest in seeing Kid Icarus: Uprising (or the series in general) return. However, he previously stated that a sequel / remake would be “difficult”.

Below is today’s full interview:

There’s one more video to go as part of the Harada’s Bar series with Sakurai. For those that missed it, you can watch the first part here and the second portion here, in which Sakurai comments on retirement and more.