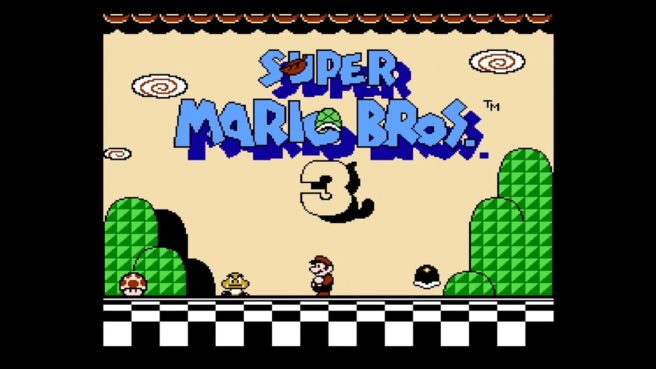 Beginning with an overhead point-of-view

Super Mario Bros 3 came out in 1988, three years after the first game. What can you tell me about the game’s inception?

Miyamoto: We made Super Mario Bros 2 (*6) before that, with Mr. Tezuka taking the lead as the Director for the first time. Since Mario 2 achieved success, we began talking about making a truly new game.

Mr. Tezuka, did you feel a lot of pressure as the director of 3? After all, the first game was a huge success.

Tezuka: It wasn’t so much a pressure to follow the original, it was more like “I have to do this properly”… I remember it took quite a long time to get everything just right…

Miyamoto: You would always get scolded by Mr. Nakagou(laughs)

Tezuka: I would (laughs).

What sorts of things did you have trouble getting right?

Tezuka: When we first began development, we wanted the game to have an overhead perspective, rather than a horizontal one.

So instead of having a horizontal view of the game like in Super Mario Bros, you wanted something like an isometric view.

Tezuka: That’s right. But, we just couldn’t make it work.

Miyamoto: He said “I want the game to be viewed from a little bit above.” But having a clear indication of where you’re going to land after jumping was a key part of the original Super Mario. Viewing everything from above made it very difficult to tell how far you were from the ground, so I told Mr. Tezuka “This will take forever.”

Tezuka: …He did (dry laugh). In fact, there are still remnants of the top-down view in the final game, from before we switched to the horizontal view…

Miyamoto: Yes, there are.

For example, things like the black and white checkered floor?

Mr. Tezuka, how did you feel when you began working on 3?

Tezuka: All we changed for 2 were the difficulty and stage layouts, but I couldn’t do that again for 3. I wanted to make everything completely different, including all of the visuals.

And that’s why you decided to attempt a top-down view, along with giving character sprites a black outline?

Miyamoto: Mario’s face also changed considerably. Having a line of pixels between his eyes and the brim of his hat gave him a more cutesy look.

Tezuka: I wanted to differentiate Mario’s design from the original, where his eyes were partially covered by his hat.

Finishing with a twenty-to-thirty-person Human Wave

Mario’s actions are much more diverse as well.

Tezuka: Yes. We weren’t sure how people would react to Raccoon Mario. We were also worried about giving Mario the Tanooki Suit…

Why did you choose to include the tail?

Tezuka: We wanted to include the spinning tail-attack that Mario does when you press the B button.

So the tail was just meant to be for attacking, and wasn’t meant for flight initially?

Tezuka: That’s correct. We had trouble getting flight to feel right after making the transition back to a horizontal perspective from top-down… But it was something we had wanted to do back in the first game, so we saw decided to give that power to Raccoon Mario as well.

Miyamoto: We came up with Raccoon Mario fairly early on, as well as Frog Mario and [some of the] others…

You even had the Kuribo’s Shoe.

Tezuka: We experimented with a variety of individual power-up ideas, and then at the end…

Miyamoto: We had to figure out how to make everything work together. Even I had to lend a hand to help fit everything in nicely.

Well, the development time was pretty long wasn’t it?

Tezuka: Yes, it was very long.

Miyamoto: Let’s see, after finishing Super Mario Bros 2, we started on 3 in spring of 1986, and then the next year…we were still working on it. And then the spring after that, we were finally starting to wrap it up…

Tezuka: Yeah, it felt like it was dragging on.

Miyamoto: So for two years…no, more than that. We had planned to release it in spring of 1988, but it ended up taking another half year to complete(laughs). (To Tezuka) Right?

So, development took two and a half years. What went wrong?

Tezuka: We tried to cram too many things into it. And even though we’d keep trying to add new things to the game, we still had a ton of problems left to address.

How many people were on the development team when you worked on the first game?

Miyamoto: I think there were around seven or eight members.

And how many were there for 3?

Tezuka: There were much more.

Tezuka: Yes, that sounds about right.

Miyamoto: Every day the map programmers would pack themselves into a long, narrow conference room, and work on coding the stages while staring at their papers. [note: papers based on Miyamoto & co.’s designs]

Miyamoto: So by the end, it was like they had formed a human wave to finish the game.

Kondo: Yet the music was done…by me alone.

Mr. Kondo, as the sole person responsible for the music, would you say everything went well?

Kondo: No, I had a lot of trouble with the overworld theme…

Kondo: I couldn’t decide what direction I wanted the sound design to go, after the original Super Mario Bros…

Kondo: When I was making the music for the first game, I wasn’t too concerned with the style, I just played the game and composed something that felt like it fit. Still, the people who played the final game would say things like “that sound like Latin music” or “that sounds like Jazz Fusion,” so I would wonder “well, what style should I go for with Mario 3?”…

So you started by deciding on a genre.

Kondo: Yes. Everyone at work would ask me things like “Is it going to be reggae?”(laughs). But when you start with just a genre as your idea, you start worrying about all sorts of things…

Kondo: Because of that, I made two overworld BGMs. When they were nearly finished, I went so far as to ask Mr. Tezuka and Mr. Miyamoto to listen to them, and tell me which they liked more. So I had many difficulties while composing the music for 3.