Octopath Traveler: Champions of the Continent devs on how it came to be, when the project started, Switch differences, more 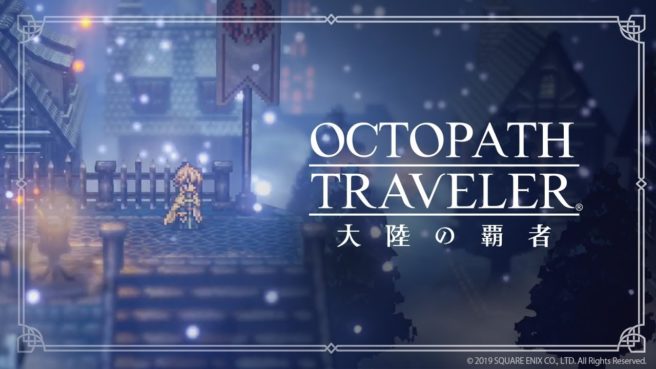 Square Enix had some significant news to share about Octopath Traveler last week. The game is getting a mobile prequel, and a new console title is also in development.

Following the announcement of Octopath Traveler: Champions of the Continent for iOS and Android, Famitsu managed to score one of the first interviews with Tomoya Asano and Yuki Yokoyama. Asano is responsible for planning / producing Octopath Traveler while Yokoyama is the mobile project’s producer and talks with partner developer Acquire as a mediator.

Here’s a full translation of the interview:

Wanting the World of Octopath to Touch Even More Players

First off, could you tell us what inspired the development of this title?

Asano: When we announced Octopath Traveler and were advertising it, we heard a lot of people say that the game “looked fun,” but they “didn’t have a Switch.” So, we wondered: “If we developed an Octopath game for smartphones, would more people be able to play it?” That was our impetus.

And from there, when did you get involved, Yokoyama-san?

Yokoyama: It was before we released the first demo for Octopath, so it was around 2 years ago from now. Acquire – the developer that worked with us on the Switch game – joined us again for Champions of the Continent; development started while the Switch game was still being developed.

Asano: We had also released browser and mobile games for the Bravely series after its entries for the Nintendo 3DS – which Yokoyama’s department had worked on. Development for this title went similarly. In Bravely’s case, we developed a different system from the 3DS games; this time was the reverse. We thought: “Would it be possible to offer the same experience as playing Octopath on the Switch on a smartphone?” We wanted it to appeal to people able to play on smartphones – “this is Octopath!”

Yokoyama: I received a lot of feedback on important points and concepts concerning Octopath – as well as a few requests – that we’d end up taking to the smartphone game. The first thing Asano told me was that he wanted to implement the “HD-2D” visual effect from the Switch game in the smartphone game. Actually realizing that was quite difficult, and looking back on what we made, my reaction to those requests was basically me wondering if we could just drop what was so popular about the Switch game into the mobile game.

When you’re developing a traditionally home console-based game for mobile phones, you typically make a few changes to the game’s systems to make it more “casual”-friendly. It’s rare to leave a game as-is.

Yokoyama: Right. We tried to develop the game’s core mechanics to be as close to the Switch game as possible. That being said, in order to make an easy-to-play smartphone game that can people can continue playing for a long time we’re also paying close attention how playing the game feels.

Is there any way you can concretely tell us how this game differs from the Switch title?

Yokoyama: The biggest thing would probably be how the characters themselves move. In Octopath, the player could enjoy travelling around the vast continent of Orsterra; in moving that world to smartphones, though, our goal was to eliminate any movement-related stress as much as possible. In order to achieve that, we essentially added “rails” to the game – you can move the characters by simply flicking your finger across the screen. What came from that was a much simpler movement system, while maintaining the sense of adventure that came from travelling in Octopath.

Asano: It finally came to be how it is after a lot of trial and error with a bunch of different ideas.

Champions of the Continent’s Content will Continue into the Future; A New Console Game in Development!?

Is there a demo planned for Champions like there was for Octopath?

Yokoyama: Yes. The demo will double as a server test, so while it’ll be difficult to let everybody play, we want to put it out as soon as possible. There are likely already many people that played the Switch game that are wondering whether or not we’re just dropping the game onto mobile phones. For that reason, I’d like everybody to be able to experience Champions of the Continent firsthand through a demo to see what it’s like.

So, you’re going along with Asano-san’s team’s more traditional approach of making something even better with the help of the players.

Yokoyama: Right, I’d like to polish the game up based on the feedback we receive from the players who are able to experience the demo version. So, to that end, we have a release time frame in mind, but not a specific date yet, as we’d like to primarily focus on the comments we get from the players.

It’s a bit early to say since it’s before release, but are you going to develop anything else after the players have experienced the wealth the main story has to offer?

Yokoyama: This is a smartphone title, but I really want to squeeze all the fun I can out of a single player experience, so we’ll be adding more content monthly after the main campaign has been completed. Because we’ve been constantly thinking about the coming content, it’s like the additional story content can’t catch up. So, at this point we’ve already planned ahead quite a bit. That being said, though, the story will have an end at some point. In order for everything to feel complete we’ll be preparing for the ending even from launch.

So, since you’ve been focused on the single-player elements, does that mean you won’t be implementing any multiplayer content?

Yokoyama: There won’t be any on the game’s release, and for the near future there aren’t any plans to add any. I thought about whether any multiplayer elements would actually be necessary for experiencing an RPG. The easy line of thinking would be “oh, it’s a mobile game, let’s include it,” but I’m not really sure about that. First, let’s just enjoy what the single player mode brings. We’ll add gameplay elements outside of the main story one by one, though.

What kind of gameplay elements, for instance? Hypothetically speaking, of course.

Yokoyama: At release, there will be random encounters as well as bosses for each map – by defeating them you’ll clear quests. You can enjoy that even after you’ve beaten the main story.

Speedrunning seems possible too! I wanna play through it faster and faster!

Asano: We’re just happy we’re giving even more people a chance to explore the world of Orsterra. Also, there are probably fans that are reading this that are expecting a new console game as well; us on the Asano team have to take care of that, so we’re leaving the smartphone game’s development to the ever-reliable Yokoyama team! I hope that’s good news to some of you.