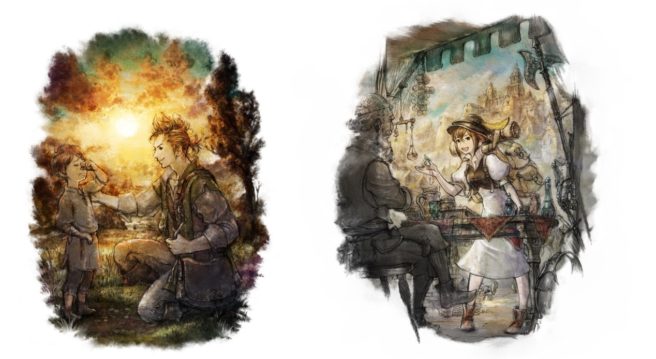 Square Enix sent out a new wave of details and screenshots for Octopath Traveler today. We primarily learn more about Tressa Colozone and Alfyn Greengrass, as well as some gameplay tidbits. You can find the latest information below, along with screenshots.

– Mercent
– 18 years old
– Used to work at a lodging house in a port city, run by her parents
– She used to look at the sea and think about what she really wanted to do and to achieve, until a merchant ship appeared on the horizon
– Her ability in the field is to buy items from NPC
– That allows the player to acquire rare items that aren’t sold in stores
– In combat, she can spend money to summon mercenaries to fight on her behalf
– She can also share BP with her companions, and cure her own HP and SP

– Apothecary
– He is a hot-blooded
– 21 years old
– He was saved by a traveling apothecary when he a was a kid
– The man gave him medicine without requiring payment
– His field ability allows him to listen to people in town, getting valuable information
– In battle, he can restore HP, cure ailments, and revive allies

– By defeating enemies in battle you earn JP (job points) separate from experience gain
– By using JP, the player can master abilities specific to the job
– Apart from the basic job each character has, they can equip a “battle job”
– This changes stats according to the equipment worn, increases the number of weapons that can be equipped, and lets the character master the abilities of that job
– All abilities that are unlocked are available on that characters
– Switching job also changes the look of the characters