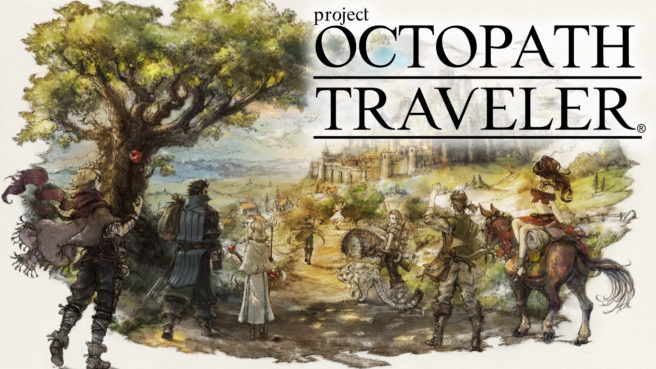 One point mentioned is how the team started this project with Tomoya Asano, the chief producer who also worked as producer of the Bravely series. The primary concept is “going on a journey.” The player would choose one of the eight protagonists, role-plays as them, and freely has a journey with the world.

Square Enix chose Acquire as its development partner because the latter has been known for making games like “What Did I Do To Deserve This, My Lord?” Square Enix first consulted with them to “make a new RPG with pixel graphics,” and they ended up working on the concept together.

Miyauchi added that Asano and Takahashi asked him “What would happen if instead of the usual pixel graphics, we’d reproduce them in a rich way with current technology?” Takahashi noted that the graphics in the first phase were old-school pixels with no depth depictions either. In that case there would be no evolution and interest factor.

It took a lot of time until they could get the right balance for HD-2D. If the changes were slight, it would feel lacking, but if they made it too rich with high resolution, they couldn’t convey the strong points of pixel graphics. They thought about a lot of topics while balancing them one by one: how modern should they make the graphics, how deep should they make the depth depiction, whether to present the water in pixels or photo-realistically, etc.

By raising the density on screen – for example by adding colors on roofs – they can make the graphics look richer while still keeping the nostalgic feel of pixel graphics.

Battles have parties of up to four people, so they considered an amount of protagonists that would be possible to have multiple permutations of (eight characters). Since they want a balanced ratio between males and females, they have four of each gender. Then they think each protagonist should have their own objective on their journey as well as their own role in the party. Each of the eight protagonists won’t have similar stories with each other because the team wants players to enjoy different experiences. By the way, the other six protagonists will have jobs different from Orberic (Swordsman) and Primrose (Dancer).

When asked which protagonist is popular among the dev team, they said each of them has their own fanbase, but Orberic was the very first character worked on so many had strong feelings towards him. Meanwhile, many female staff like the man who is reading a book in the key art. If Acquire had to make their picks, they would say the boy with muffler and the girl with hat. Since all eight characters are protagonists, they are designed in a way that the popularity wouldn’t be biased towards one of them.

When asked for the reason why Orberic and Primrose were chosen as playable characters in the demo, it’s because their starting points are closer to other party members that can be encountered. Their Field Commands (Orberic’s Duel and Primrose’s Temptation) can also convey the game’s appeal better. When asked how they got the idea for these Field Commands, it was first explained that they made a world setting where people can actually step into [as in to immerse themselves as if they’re living inside that world]. Jobs like Swordsman and Dancer were picked based on what existed in Medieval Europe. And Field Commands are based on the images of those jobs.

Famitsu noted that both Orberic and Primrose had heavy burdens to bear, but Takahashi said it was not intentional, since the other reason they picked them was because their motives to go on journey are easy to understand.

Famitsu then made a note about Command Boost and Break in the battle system. Miyauchi received a request from Asano and Takahashi to make a battle system that can be enjoyed by everyone. Takahashi noticed that recently there are more RPGs with action elements, but they want to make an RPG that can be enjoyed by people who aren’t too good with action. They opted for the Command Battle system, but simply using this system would make it feel lacking, so they tried adding new strategic features to it which resulted in Command Boost and Break. While they’re not revolutionary, they’re simple so they have good affinity with Command Battle system.

At first they only considered Command Boost, but the team feared it would eventually make the game into a show of dealing big damage with higher attack power. So when they thought to create a goal in a shorter cycle, they came up with Break where reducing the enemy’s Shield Point to zero renders them unable to move. By having the Shield Point shown, players can opt to use Command Boost on enemies under Break status.

Command Boost can be used not only for attacking but also healing or buffing defense stat (the latter is for Orberic’s case), so the timing to use it will be important.

In Project Octopath Traveler, each protagonist will have different starting points, so there is high probability that they will have a gap in the progress difficulty. They’re trying to make the progress level same for everyone, but if the entire world is made on the same level it wouldn’t be interesting, so they intentionally change the difficulty depending on the place.

The Project Octopath Traveler demo has been racking up download amounts well within four months after its release. As previously announced, it has surpassed one million downloads worldwide.

The reason why they released this demo is because they thought simply publishing screenshots and trailers wouldn’t convey this game’s fun factor enough. Famitsu notes that releasing a demo of a brand new game worldwide must mean the team has a lot of confidence on it. The team was indeed already prepared to be skewered with many opinions, and they’d use them to make Project Octopath Traveler even more complete.

Many players thought the demo was interesting – not only in Japan, but also more than 80% of the overseas player base, so they have felt that foreign users have high expectations with JRPGs. The over 45,000 survey responses received served as huge encouragement to them.

The HD-2D and Field Command features are well-received in particular. The team is glad that this graphical element is liked by many, because they wouldn’t have an idea on how to fix it again if the response was negative. As for Field Command, they had balanced the game so that players can progress through the game without having to use this system too often, but they’re really glad people are exploring the game much deeper than they anticipated.

There was one player who won against a high-leveled NPC in a Duel, and another who defeated all bar customers. While they had expected the former, they didn’t expect the latter.

There were also many structural opinions that clashed with each other, so they could organize well which parts should be changed or left intact.

The music has also received a strong reception. The internal staff also liked how the music flows smoothly from pre-battle events to boss battles. They also gave a shoutout to the composer Yasunori Nishiki, who is of the same generation as Takahashi and Miyauchi; a generation raised by SNES-era Final Fantasy series, so it’s easier for them to share the same image, vision, and goal.

Many of the opinions they received from outside of Japan point to the hard-to-read text, because the UI was based on the Japanese version. So they will be adjusting the text size and give more space for showing text.

As for the most received opinion overall, it was about the slow map movement; some people almost never walk, and some others found it hard to grasp that B button is used to switch between walk and run. So they made the movement speed to depend on how far player pushes the stick. Pressing the B button will make the character run even faster, but with an increased enemy encounter rate. This could be a demerit to some, or a merit to others who want to level up characters.

There are also many requests for a Fast Travel feature, so it is now possible to move from a city to another.

The next opinion with a great deal of feedback was that the screen was too dark, making it difficult to explore dungeons. They are putting waypoints to make routes easier to understand, as well as slightly broadening roads.

Regarding the depth depiction, some said it is an interesting thing, while others said it’s difficult to see through it. But for this aspect they decided to make both available as option selections.

They’re also implementing an Event Skip feature, as well as the ability to freely watch events that have been already seen.

Many had valued the battle system well, but there were also some who thought it was monotonous. Some also had certain views about the battle tempo. This is being improved by shortening the character turn change time.

Some of the requests pertaining to the battle system were related to the limitations of the demo, since at the beginning of the story, Orberic and Primrose have few party members with not all abilities available either. The team thinks that battles will become more exciting with yet-to-be-announced features as well as more party members. In a four-character party, players will be able to defend from enemy attacks by having a fast character Break the enemy, leaving them open to attacks from other characters.

They did consider releasing demo data that would have a complete four-character party, but because they wanted people to experience parts of the storyline, they opted to have people play the prologue. This was the result of a dilemma on whether to prioritize battle or story.

Finally, the team is committed to the promise of releasing the game within this year (2018). They’re doing their best so that they can announce the release date as soon as possible.