Sakurai on ending Smash Bros. DLC, wanting to appeal to all players 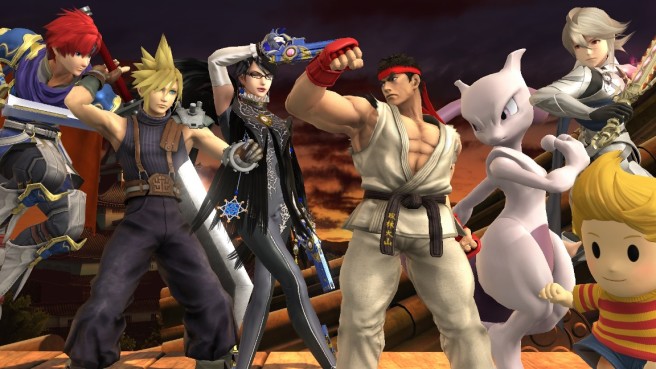 This month’s issue of Nintendo Dream features an interview with Masahiro Sakurai. During the discussion, the Smash Bros. director talked about ending DLC in the Wii U and 3DS games, including how development differed with the main title and why now is an appropriate time to stop adding characters. There’s also quite a bit of discussion about how Sakurai wants Smash Bros. to appeal to all types of players.

Head past the break for the interview breakdown. Please note that this particular post is more of an abridged/summary version rather than a word-for-word translation.

Q: It’s the first time you have made DLC for your own game, so how does it feel?

A: The most noticeable thing is that there are fewer development staff than making the main game. Less frequency on supervising, and more relaxed than producing the main game. But there were also moments when I was very busy (making videos and balancing the game could take whole night) and also when I wasn’t really busy at all (when waiting for things to get done).

Q: I don’t really believe [you have a moment when] you’re not busy at all (laughs)

A: I’m still busier if compared to the more usual developers (laughs). But as the DLC development staff were the only important members, they weren’t as many as the hundreds that were in main game’s development, so the level of my business was also proportional to that.

Q: But there are really no other examples that this game continues to generate hype even with post-release extra fighters.

A: There’s a totally different meaning between adding a character in Super Smash Bros. and other games. I think Smash’s peculiarity is in its unpredictability on collaborating on totally unrelated things, as well as their reveal videos. That’s why we did our best each time.

Q: We had fun in predicting which character would be added. The chief editor always said Donbe (male main character from Shin Onigashima) though (laughs).

A: He would be only understood in Japan though (laughs). But if he were to be added, things like what his moveset would be like, and how to use him in battles, would be of an interesting discussion to each communities.

Q: It’s a bit sad to see this will be the last time to generate that hype.

A: But if we keep adding more popular characters to Super Smash Bros., it would later end up eating up the contents itself, and lessen everyone’s surprises. If we were to have 100 fighters in a Super Smash Bros. game and then added the 101st fighter to it, I don’t think it would ever generate as much hype as now. That’s why I think this is the best time to draw the line.

Q: You would never stop creating things either (if the above were true).

A: In fact creating one character would end up taking more time than creating a fully packaged game, because our priority is to make each of them unique. Not copying from any other fighters, and have their own gameplay systems.

Q: How did you feel when looking back at changes in trend from Internet battles?

A: I saw some results, but for the in-depth research I left it to a monitoring team. Because what I need to focus on are the beginner and mid-level matches. My priority is to make an environment that’s safe to play on those levels. I could never catch up with the high-level matches (laughs), so I only took reference from the monitoring team’s findings.

If we only balanced with focusing on just 1-on-1 serious matches, we could have done the game without any bias. However, that would diminish the factor of a party game which is to be played by everyone gathering at a place.

Q: It’s hard to please both casuals and hardcore players at the same time, isn’t it.

A: I think this discussion is hard to be understood by general people. Especially for people who always play serious 1-on-1s, it’s like that’s their only world. There’s also the possibility communities in other places wouldn’t understand [them] either. If people keep narrowing it down like actual fighting games where they acknowledge only strong people, as time passes without people realizing it, there would be lesser and lesser, even no more people who play Super Smash Bros. for fun anymore.

Q: They would end up becoming more maniacal.

A: We had a Nicovideo stream (on March 19, 2015) where we had voice actor Tomokazu Sugita, composer Kenji Ito, and the stream director play Super Smash Bros. for Wii U. Sugita-san and the director both love games, while Ito-san almost never plays games. Of course the former two would dominate, but there were also times where Ito-san actually won matches.

Q: So that means a game element where beginners and advanced players can somewhat play together, right?

A: It doesn’t need strong gambling elements like mahjong or trump cards, and we don’t give huge buffs to low-ranked people either. However, I think games like Super Smash Bros. which can be played by everyone by disregarding skill gaps are rare and precious. That’s why for me, I aim to make the play layer not narrow, so that four people can have fun brawling in an enjoyable room. We had a variety program in Japan where we had a comedian pair travel all around Japan and play games against random kids. It was fun to see that, including looking at the unique personalities of each players. I was really interested at observing how grade schoolers would play against each other.

Q: But it doesn’t mean you can dismiss people who probe into 1-on-1s either. It’s notable when you look at how online battles & tournaments are expanding. I think it should also fit what Sakurai-san always said about Super Smash Bros. as ‘play it the way you like’.

A: Strictly speaking, people who play online battles are really only a part of the whole [player base]. People who want to play solo will always play alone. However, there are also many audiences that don’t [play solo]. But as for myself, both [solo and multiplayer] are important and can’t be ignored.

Continue on to the next page for a breakdown of Mewtwo, Lucas, and Roy from Sakurai.