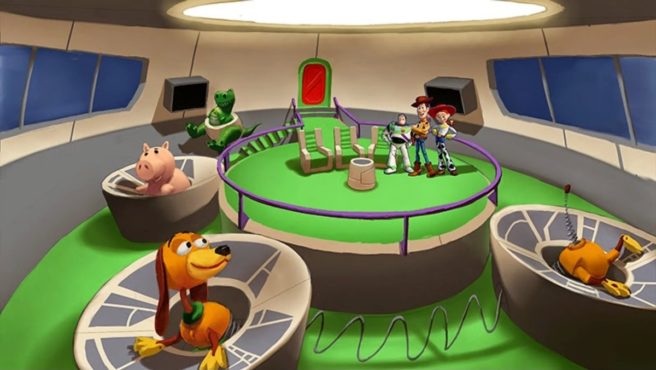 Avalanche Software will always be known for its work on the Disney Infinity series. Prior to that franchise, however, the studio also put out another Disney-related game: Toy Story 3. While working on that project, Avalanche was cooking up something alongside it.

Kotaku has unearthed details about the cancelled project known internally as Star Command. In it, the cast of Toy Story would head to space and help toys from all over the galaxy.

Here are some additional details:

– Originally planned as a Toy Story 3 expansion
– Then turned into a full-on sequel
– Shelved in 2010, a year into developed
– The team then focused on what would become Disney Infinity
– Star Command was the bridge that turned the secondary toy box mode of Toy Story 3 into the huge world of Disney Infinity
– Third person action-adventure game with a world loosely based off Buzz Lightyear’s fictional space force
– The team took the concept of the Toy Story 3 game’s Toy Box and built more on top of it
– Star Command would expand the size of the world, the types of enemies you’d encounter, and the variety of weapons and items you could use
– The team had a vision for a playable galaxy with a variety of environments spread over different planet-like levels that players would traverse via spaceship
– One of these worlds was pirate-themed, including a sea level the player would need to change to progress, a special sword that could morph into other toy characters, and enemies designed like sharks and eels
– Team also discussed a fairy tale world and worlds that were populated by crazy 80’s action toys
– Not many of these worlds had development time beyond a few concepts
– The hub world was going to be a massive spaceship similar to the spaceship-like cardboard box that Buzz Lightyear toys are stored within in the Toy Story movies
– From their ship, players could either follow the game’s story or mess around at their own pace
– Story mode would have had an original narrative
– Toy-box type town building mode planned as well
– Project was scrapped for a number of reasons, including the tight scheduling demands imposed upon Avalanche
– The focus on movie or toy releases often forced the studio to have several ideas in production at once, with one launching nearly every year
– Toward the end of 2010, Disney executives suggested working on a project that supported physical figurines or add characters from other Disney franchises to Star Command
– From that point onward any development on Star Command turned into development on Disney Infinity, essentially shelving the project
– Avalanche had built assets, levels, and characters for Star Command
– Only a few things survived the transition to Disney Infinity
– Much of Disney Infinity’s Toys in Space expansion came from Star Command’s development
– The Star Command game was planned to be much more ambitious than the Disney Infinity playset
– Many of Star Command’s ideas, like the spaceship hubworld and pirate level, were either scrapped or tied into another franchise within Infinity