Super Mario Maker – origins of costumes, cursors, and a message to fans 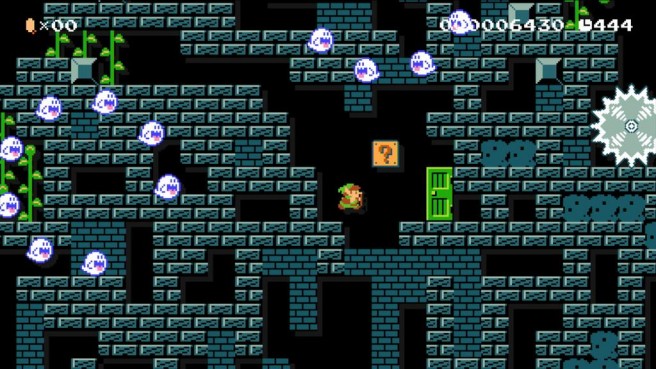 Several interesting topics came up during the interview, and we’re excited to share a few excerpts with you all. The three team members spoke about how the idea for costumes came together, the different cursors (including some abandoned, an yet strange ideas), and a message for fans regarding the series’ future.

Head past the break for our complete translation.

ND: I was surprised how many costumes there were.

Oshino: It was really a big trouble since there were so many.

Tezuka: To tell you the truth, it wasn’t supposed to go like this.

ND: Is this a thing that was originally invented when thinking about what to do with amiibo support?

Tezuka: We had a vague idea that we wanted to use amiibo, like if we got an interesting concept then we would certainly implement it. And then the artwork designers approached designers of the team and proposed ‘we tried drawing amiibo characters in pixel art, so wouldn’t we use them in some way?’ It seemed interesting, so we accepted the idea and experimented changing Mario’s sprite to a pixel sprite of a different character.

Yamashita: We had a sheet of Mario’s moves, so if we overwrote it, we could display different characters. Mario’s NES sprite has very few different patterns, so if we tried it out with one character – I think it was Wii Fit trainer – it would move in no time. Although we started in the morning, it already worked in the evening, so that was amazing.

Tezuka: It takes around a month to create a 3D model from scratch and get it moving.

Yamashita: Attach a skeletal frame, make it move… As you would expect, you can quickly make a pixel sprite that moves. Developers weren’t just interested, they were excited like ‘you can create a character this fast in this era!’ We discussed that if you can create one that fast, it seems like the amount is within possible limits and so we decided to implement them.

ND: So it started from an idea ‘let’s make different sprites other than Mario’ and that wasn’t limited to amiibo.

Oshino: That’s right. In the first plan you could play as characters that weren’t amiibo.

Yamashita: The starting point was strange things like Goombas and question blocks that grow legs.

Oshino: We talked with the designers to prepare about twenty to thirty of them, but after that we decided to support amiibo.

Yamashita: We hadn’t decided what to do with amiibo linkage, so I thought this would settle it smoothly and be just right. However, I didn’t quite understand at that time how many amiibo would come out… There are so many!

Oshino: Although the designers created sprites with a fast pace after the amiibo linkage was decided, the implementation was more troublesome than that.

Tezuka: There are jump sounds and goal fanfares, right?

ND: Yes. They change depending on the costume.

ND: It was discussed in an earlier interview how the hand that appears on screen belongs to a Nintendo employee, but in the final product you can also change that to a cat or dog paw. Certainly that cat paw belongs to a cat of Mr. Tezuka, right?

Tezuka: Yes. Any cat paw would have been alright, but I just happen to have many cats at home.

Yamashita: Ten of them, if I remember correctly?

Tezuka: To tell you the truth, one of them was edited to look like the color of an American Shorthair. The actual color is light brown.

Yamashita: Ah, that’s right. He/she was a good kitty. It felt like he/she was calm and got used to photo shooting. That other one was a bit…

Oshino: That one hated shooting.

Tezuka: By the way, the dog was Yamashita’s.

Yamashita: That’s right. He/she is Shiba [a Japanese breed]. The color is actually white, but it was changed.

ND: Why did you introduce cats and dogs in the first place?

Tezuka: We wanted to have more hands than just one, like left-hander. So we discussed with the designers that if we are going to add more hands, we would also like to add more varied things.

Yamashita: We thought that if we are going to do it anyway, it would be interesting to also add strange things. Although we tested various things, not many of them were fitting.

ND: What kinds of things did you try?

ND: Did you do photo shootings at the company?

Tezuka: We took the pictures by staggering a bit of time. It was a fun day.

Yamashita: It was a weird day (laughs).

A message to readers

Tezuka: I think many people wonder what will happen to the next entry in the original series after we created this new form of side scrolling Mario action. Don’t worry, we intend to come up with interesting things even after this, so please look forward to those, too.