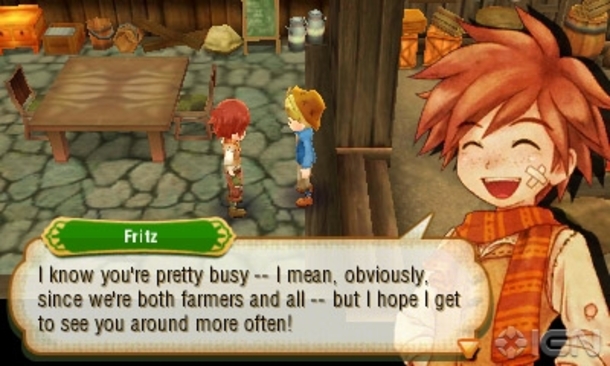 XSEED (not Natsume!) is localizing Harvest Moon: Connect to a New Land for North America, IGN has revealed. The game will be available later this year.

When the latest Harvest Moon does arrive in the states, it’ll be titled “Story of Seasons”. IGN explains the name change in a new article:

Story of Seasons was launched in Japan earlier this year, where it was known as Bokujo Monogatari: Tsunagaru Shintechi (or Farm Story: Connect to a New World). But due to the involvement of a different publisher — XSEED Games, a wholly-owned subsidiary of MarvelousAQL — Farm Story could no longer translate to Harvest Moon, at least in the west. Natsume owns that intellectual property wholesale, and as such, Marvelous and its western XSEED offshoot endeavor to continue the series with the same development team and a new name.

Marvelous AQL and XSEED note that Story of Seasons players will be able to “create fully customizable character[s], selecting gender, hair style and facial features as desired. They will then take on their role as the newest resident of Oak Tree Town, a small settlement filled with promises of new beginnings, hard work and significant relationships. In the process of tending to crops, animals and the many other aspects of everyday farming life, players will amass the resources necessary to customize and expand their farms — from livestock and seeds to décor and layout — granting total freedom to shape their homestead as they wish and fit virtually any play style.”

Story of Seasons will make its debut at E3 2014 next month.