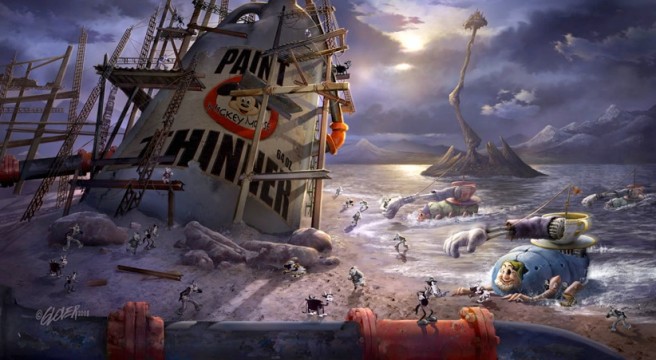 Epic Mickey director Warren Spector held a Reddit AMA a few days back. Spector shared plenty of insight about the original game and its sequel, and tackled some very interesting questions. He was asked about topics like Epic Mickey’s dark concept art that never seemed to be realized, how he tried pitching a film based on the series to Disney, and the one thing about Mickey he couldn’t show.

You can find a full roundup of Spector’s comments below. They’re certainly worth checking out!

On Epic Mickey’s original, dark concept art that leaked before the announcement

That concept art was leaked and never intended for public consumption. I had the team do that because I needed to know where the line of acceptability was for Disney. What would they be comfortable with and what would they not be comfortable with. The way to find where a line is is to cross it. By a lot. Do something really out there and have them go, “No. Too far.” Then do something a little less radical… and less radical until, frankly, you get where you want and they don’t even realize you’ve gotten there. I think we pushed things further, darkness-wise, than anyone thought possible.

Will a game in that crazy, over-the-top, dark as the pit style ever see the light of day? Probably not from Disney!

On what “went wrong” with Epic Mickey 2

I don’t think anything “went wrong” with Invisible War or Epic Mickey 2. They were attempts to address specific concerns or express specific creative desires and were the best games they could be given limitations of time and budget. I’ll always be proud of the creative and technical risks those teams took, how hard they worked and how committed they were to each other and to the games.

On Epic Mickey’s future and interest in making a film

Does Epic Mickey have a future? You’d have to ask Disney about that. Honestly, I’d be a little surprised if there were any more games in the series but I guess you never know.

Could Epic Mickey have worked better as a film? Better, hard to say but probably not. Could it have worked as a film? You bet. I actually put together a trailer and a budget and had a team lined up to make the Epic Mickey film but Disney didn’t bite. I REALLY wanted to make that movie…

On restrictions from Disney

Well, I’m actually not under NDA or anything with Disney, so I can talk about what happened there. The bottom line is that Disney gave me and the team an almost unbelievable amount of freedom to make the game we wanted to make. I think everyone there knew I was respectful of the properties – oh, hell, I’ve always wanted to be Walt Disney! – so they didn’t worry too much. The one thing they told me (and I still find it weird almost beyond belief)… the one thing they told me I couldn’t do was show Mickey’s teeth. Go figure.

Okay, Disney didn’t always give us as much time as we wanted to make the games EVERYTHING we wanted them to be but (a) NO publisher ever gives ANY developer enough time and (b) no game is ever even close to what you wanted it to be.

(Actually, Deus Ex came pretty close to being the game I hoped it would be when I first started thinking about it, but that’s a very rare exception – one of a kind in my experience.)

There were never plans to incorporate more recent characters (at least not until we left the Wasteland, which I really wanted to do in Mickey 3). I set a rule that nothing would appear in the game that happened after 1967 because I didn’t want to include anything Walt himself didn’t touch. (We violated that rule more often than I’d like – and I’m surprised no one’s ever called us on that – but it was still a rule.)

On how Spector became involved with Epic Mickey

My agent encouraged me to talk to Disney even though I knew they wouldn’t be interested in the fantasy and SF stuff I was concepting at the time. I was right about that, but they asked me if I was interested in working on a Mickey Mouse game. I turned into a puddle on the floor and when I reconstituted myself said “YES!” Who says no to working with Mickey Mouse? Not me!

Forgot about the Japanese designers question: Does anyone not love, admire and respect Shigeru Miyamoto. He came and visited the Disney Interactive booth at E3 once and I stood within 6 inches of him and couldn’t bring myself to say anything. I was in awe. A couple of years later, I presented Epic Mickey at the Nintendo press conference at E3 and, backstage Mr. Miyamoto touched my arm and I instantly became a better designer. No fooling.