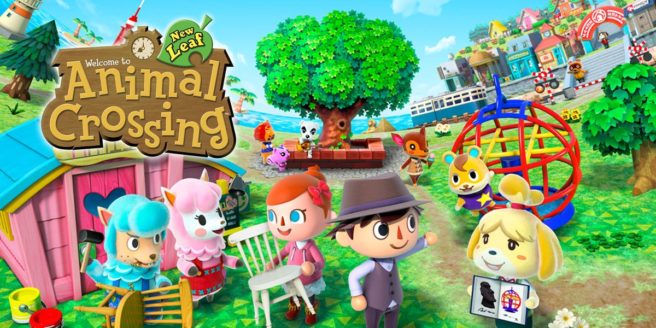 The two devs weighed in on the Animal Crossing series as a whole, but more general topics as well. They were asked if they anticipated Animal Crossing becoming so popular, approach to making games, what they aim for when creating titles, and more.

We’ve picked out Eguchi and Nogami’s notable responses below.

On whether they thought Animal Crossing would ever be this popular…

Hisashi Nogami: It’s been 15 years since we released the first Animal Crossing in Japan. When we worked on the game, our goal was to just complete it and have the people play it. So at that time we were focused and overwhelmed by that task.

HN: Also, it was hard for us to use a reference, to say that it was a game similar to another game. For Splatoon, we could say it’s like a third-person shooter but it’s different in this and that way, but in Animal Crossing we had nothing like that. We didn’t have a proper genre that we could use as a reference point. It was very difficult to explain to the promotional staff on how to promote it. How do you write a catchphrase for this game? It’s unprecedented!

HN: Right after we released it, we saw some players that really dug the game. The original Japanese advertisement featured a young school-age girl, so we thought it would appeal to this user base. Once we released it, the mothers of these children were also playing the game, and then the father would also play, and then the entire family would be playing it! We were really happy when we noticed that.

Originally we wanted to create a game that would promote greater communication between the family, where each player wouldn’t share the same save data, but they would live in the same village. We created a situation like that, where you can exchange letters, you can write messages on the board, or you can speak with the animals and, you know, those animals would spread rumours! We added that kind of component for that purpose, and we noticed that it actually did help further promote communication amongst the family. We felt that people really understood what we were intending to accomplish.

On how games/players have changed over the years, and whether that changed their personal philosophy for design…

HN: I don’t know if they have changed. I think in essence things haven’t changed considerably. For example, looking at the Super Nintendo era, you would play the game on your own and discover where you can go and what you can do. When we were children you would get together with friends to share this information. These days I think the method is different, but the approach is pretty similar.

People play Super Smash Bros. over the internet, but previously we would just get together at each other’s houses and battle each other with our favourite characters! Nowadays we have online networks and social media, so whereas before we had a community of friends who were nearby, now they might be further apart. There’s a wider community of players that you can interact with more easily.

KE: I think the aim of players hasn’t changed much from the initial days in terms of what they are trying to achieve through the game. For example, when they first started playing they couldn’t do something and eventually they could achieve it, or they were able to beat the competition they were fighting. Or you collect a lot of items, then you show it to people and share your impressions.

With time those methods of expressions have evolved to become more beautiful, and perhaps more complicated things can now be achieved. We can now achieve things in an easier way, or we can carry out those games with people who are further away. So those things may have changed, but I don’t think the essence of what people are enjoying from games has changed.

HN: I don’t think it’s just limited to games. Like catching insects outside or, you know, just showing them to friends, like “I caught an interesting insect”. The essence is in other forms of games as well, not just video games. You can use Facebook or Twitter to share information to say you did this or that. The mediums have varied.

There are games where you can express yourself and your individuality more. Before, you were given the framework and you played with it, and now it becomes a bit more of a two way thing. It’s expanded a bit in terms of the expressive potential.

HN: No, it hasn’t changed. For us, we create games with components in response to how we imagine the players will react. For Animal Crossing or Splatoon, they’re very different types of games, but when we’re creating the games, the basic approach we take is the same for both. The idea can vary, but the approach itself is the same.

KE: Previously, with one software you couldn’t do a variety of complex things, so you had to have one goal for one game. Now, for example with Splatoon, you can have the element of beating your opponent or you can go into the Plaza where you can express yourselves, create communities and interact with other players.

HN: You can combine a variety of gameplays into one. We’ve been able to encompass a greater variety of gameplay styles into one game, and then we see which component matches well with other components. Once we’ve done this, we create the optimal integral experience for the users.

On their top aim for a game…

HN: Number one is that the player is happy, has fun, is surprised and that the game moves their emotions. That’s the highest priority for me. Also, more personally perhaps, after they finish playing I would like that something remains in them from the game.

For example, you have DRAGON QUEST. It’s a game you play alone, but how far you’ve gone into the game, or how you defeat a character…that’s fun for me. I mean, in my personal experience it’s fun to share that kind of information with my friends. It’s good to have fun inside the game, but I think I also want to create something that you can also enjoy with others as a community.

Of course, it’s important that you compete against yourself and you enjoy something as a single-player game, but it’s nice to be able to share that with others.

KE: Number one, as Mr Nogami mentioned, is that the person who gets the game, and all of their friends, must have a fun experience. They must be able to share that with each other if they want to. That’s the first priority.

During the time that they are playing, they can forget everything, like all the troubles they have. I think that it’s important that the game can have a very high immersive experience. It can be a happy, relaxing kind of game, or it can be a more competitive game. Whatever it is, it’s important that the player can immerse themselves so that they feel like a lot is on the line and they have to strive to achieve.

HN: I think we can make a nice comparison with Animal Crossing and Splatoon. It’s very different gameplay, but the idea of immersion is the same.

I want to make something that I can enjoy playing. From my job perspective, I’m not creating the actual game, I’m the producer. I’m more of the co-ordinator. I support and help out the people who are directly making the game. I can’t directly make the game myself – not always, at least! However, in my heart I’m looking at things and saying it’s something that I would enjoy. Frankly speaking, that’s where my motivation and my approach comes from.

KE: It’s been 15 years or so since the first release of Animal Crossing in Japan, so many of the people who played the first game in the series have become mothers and fathers. We want to continue creating games that they can also enjoy along with their children. For the next 15 years as well, we hope we can continue producing games in the Animal Crossing series that you can enjoy along with your children and your parents.