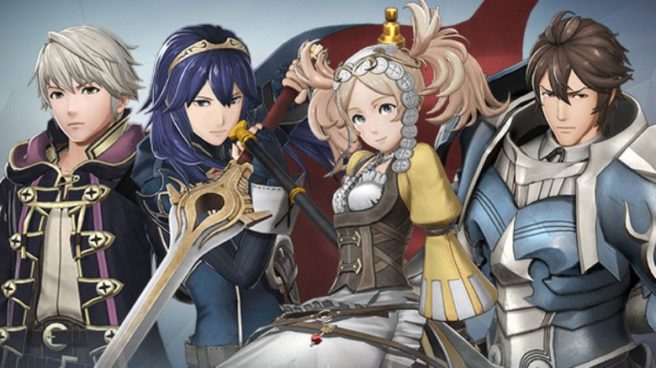 It wasn’t too long ago that Nintendo Dream published a lengthy interview with the developers of Fire Emblem Warriors. But in its latest issue, the Japanese magazine brought back producer Yosuke Hayashi and director Hiroya Usuda once again.

The second interview has its own interesting tidbits and discussion. Hayashi and Hiroya spoke about the reaction to Fire Emblem Warriors out of E3 and reveal that Chrom was the first character created. There’s also a lot of talk about why Lissa wields a staff, how there was initially some consideration about not including Lucina, the inclusions of Frederick and Robin, and more. Towards the end of the interview, Hayashi and Hiroya spoke further about how characters were selected for the game.

Continue on below for our full translation of Nintendo Dream’s new Fire Emblem Warriors interview.

After the announcement at E3

ND: Please tell us your impressions after E3 ended.

Hayashi: There were a lot of Nintendo’s titles out there so I was worried it would get buried (laughs), but I think we could convey that “these characters will be the core main characters of the game”. It’s still just about 20% of the whole contents though. And we’ve also been able to show actual footage of “controlling characters with quality that would have been only possible in pre-rendered movies”, which we have talked about previously. That’s why I think we could assure all our fans that “it’s real”.

Usuda: I was still in Japan at that time, so I watched the Spotlight and Treehouse Live just like the fans. I’m glad to see people enjoyed playing the game, and although it was broadcasted rather late in Japan, many people reacted on SNS (social media), so I’m really grateful for that.

Hayashi: In Japan the Treehouse Live was broadcasted at around 3 AM, wasn’t it.

Usuda: I waited for it to come (laughs). And when it started, every time the likes of Marx/Xander and Ryoma appeared, [the host] got excited saying, “It’s my husband” which left quite the impression on me.

Hayashi: I felt the same way, too. Many people who played [the demo] also shouted “Oh! My husband!” and said things like “My husbands, please don’t fight each other for taking me.” I nonchalantly ended up asking if the waifu and husbando culture is also getting into America (laughs).

ND: (Laughs) We’re going to ask about what Hayashi-san talked about in Treehouse Live. First of all on the existence of the Coliseum [mode]; What kind of thing will this be?

Hayashi: The Coliseum will be one of the modes for replayability outside Story Mode.

Usuda: Yeah. It will be something like ‘Passing through a number of battles!’ In the first place, the mode with replayability is going to have several [consecutive] battles, so if it didn’t have variety people would get bored with it. So when we were going to make something brand-new that’s never been in past Warriors games, someone said “Doesn’t Fire Emblem have the Coliseum after all?” That’s why we included the Coliseum which will have fun battles and gameplay with large-scale special rules.

Hayashi: We’ll properly announce the details at a later date, so please look forward to it.

ND: And we also heard that the Level Up scene can be turned on and off.

Usuda: At first I thought that the Level Up scene is an obvious one for Fire Emblem, so I made it to be unskippable. However, someone told me that frequently pausing in an action game feels not quite right.

Hayashi: Yeah. I’m also in support of its addition, but for people who prefer playing proper action games, they’re a bit [bothered] with the screen pausing in the middle of the action. That’s why we made it to be a selectable option.

Usuda: Other than the Level Up one, the screen also stopped every time a new mission began in the E3 [build], but you can also turn it on or off so that you can move smoothly. So we really want this game to be played by both people who play strategy RPGs and people who play Musou Action, so we’d like people to be able to choose all settings and play with their own preferred environments.

The weapon types of the twins, and the reason why sword was chosen

ND: By the way, people are also discussing about “Why did they give swords to both twin protagonists despite many of the appearing characters also having swords as their weapon type?”

Usuda: Yes indeed. Because there are many sword characters, there were talks during development to give an axe to the boy (Shion/Rowan) and a spear to the girl (Lianna). However, the twins are Lords, and while we were designing the game prologue, we wanted those who don’t really play action games to be able to properly play it too, so we wanted to create the right kind of tutorial. In that case, the enemy positions and gameplay experience would change, and it wouldn’t feel right if they would change based on the protagonists’ weapons. We want people to understand the weapon triangle starting from the sword. We want people who don’t even know about Fire Emblem to be able to grasp the rules, so we made [the tutorial] to stay the same regardless of the choices for the two.

ND: By the way, can weapon types be changed for each character?

Usuda: No, you cannot change weapon types, so the twins will always wield swords.

ND: From here we’d like to hear about the characters announced this time. So these are characters from Awakening, right?

ND: So Chrom is the very first character created among them all?

Usuda: Chrom was the very first, and the rest were created in parallel after him. The reason why we picked Chrom first was because there were talks of improving graphics to the level of pre-rendered movies in the original games, and there are models for Chrom and Lissa there.

ND: So you already had something to use as a reference with him.

Usuda: Yes. And not only because of the looks, but Chrom is also a Lord using a sword, so he’d also have a standard position action-wise. While we’re implementing actions in Fire Emblem Warriors, we also used Chrom as a reference on how far we should represent them. We could match his movements from the original game, including his actions during battles, and poses in the boxart and other illustrations; Chrom was even the starting point of deciding the direction, the skeletal frame of Fire Emblem Warriors’ action.

ND: So it was the most hectic until you could finish up Chrom.

Hayashi: That’s right. Awakening characters have flying poses in their Warrior Special attacks, but if you look at them from the side it will look like the boxart of the original game.

Usuda: Other than that we also always talked to put in flashy actions, such as the spinning slash attack shown at the coliseum in the original game. Because in Hyrule Warriors, there were some parts that seemed nonsensical, so characters that just swing their swords would end up having boring movements.

ND: Because in that game you could even drop a moon (laughs).

Hayashi: That’s why we also don’t want [Fire Emblem Warriors] to look plain after [having released] Hyrule Warriors. However, there was also a time when we overdid it and were told that they couldn’t look at the screen properly because the moves were too flashy (laughs).

Usuda: Because it also coincided with our experiment to see how flashy we could make the effects. That’s why at first we put in so many things like aura, but we got told by programmers that “it became heavy on the processor” (laughs). We adjusted them from that.

Hayashi: Someone also said “This is not a Warriors game because you couldn’t see the enemies!”