[Interview] PlatinumGames on returning to The Wonderful 101, Kickstarter, butts, and more 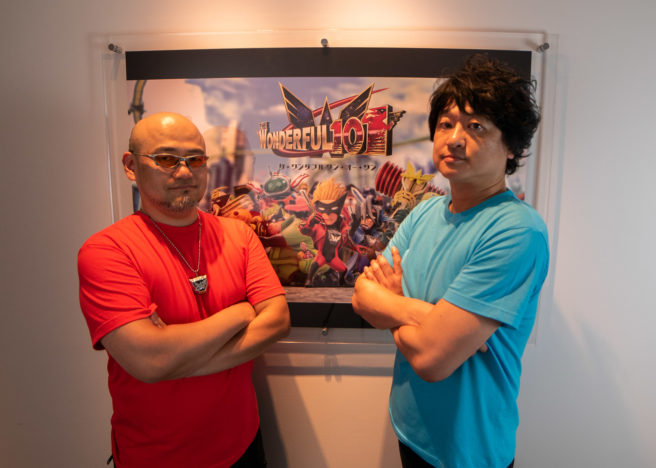 Prior to the announcement of The Wonderful 101: Remastered, Nintendo Everything had a chance to speak with PlatinumGames about revisiting the Wii U game. We sat down with director Hideki Kamiya as well as studio head Atsushi Inaba.

During our discussion, Kamiya and Inaba discussed revisiting the Wii U title, going the Kickstarter route, and more. We also took some to talk about the original game, and yes, butts. Kamiya shared a little tidbit about Wonder Pink that fans may not have been aware of before…

What made you want to revisit The Wonderful 101?

Kamiya: Well, we first released The Wonderful 101 back in 2013 on Wii U, and for various reasons it wasn’t a successful business endeavor for us. Inaba and I have since lamented that not many players were able to experience the game.

I’m not really sure when we first started talking about bringing the game over to new platforms, but we had to consult with Nintendo first. When we sat down with them, we explained our situation: how the game wasn’t successful upon release and how we wanted to bring it to modern consoles. I mean, it was really disappointing for us, you know? We worked so hard to make this high quality game and we were hoping a lot of gamers would play it, but that didn’t really pan out. So as a result of our negotiations, the kindness of Nintendo has made both the ports and this campaign possible.

Which platforms are you targeting for release?

Inaba: We’re definitely releasing on Nintendo Switch in the base campaign if the Kickstarter is successful. We made this game with Nintendo, so there’s no way we wouldn’t release it on a Nintendo platform. Then we’re targeting other platforms in the stretch goals like PS4, Xbox One, Steam – we want an even larger pool of players to experience The Wonderful 101. And you know, we’re really conscious and appreciative of what a rare thing this is, thanks to Nintendo. This might even be a first in the entire video game industry.

So with these platforms in mind, how is the original gameplay of the Wii U’s dual-screen going to translate to single-screen re-releases?

Kamiya: We did have an option to play on just a single screen on the original Wii U release where the second screen was displayed in the bottom right corner. But we want to take this opportunity in revisiting the game to adjust what’s going on in the UI. This was the largest game I had made at the time, so we were still getting a feel for things back then. Looking back on it now, I feel like there are some aspects that are a little off-putting or unoptimized. For example, with the second in the corner, some of the UI got in the way or just hindered the experience. So even though players could use the single screen mode on Wii U, I feel like it was actually disadvantageous. We wanted to move things around, make things bigger or smaller and have a lot of different modes in the­ original, but we ended up not being able to make it happen.­

But in addition to all of that, we’re looking at the smallest of details, too. Throughout The Wonderful 101, the camera moves around depending on what action is happening, such as a top-down camera or a behind-the-shoulder camera and so on – sometimes it’s even similar to a shooter with the player pressing a certain button to fire and whatnot. And I think there are some UI elements that aren’t as well optimized as we’d like them to be. Some players may have gotten confused during some gameplay mode changes where they didn’t know which button to press or what to do. These are the kinds of things we want to adjust to create a more intuitive and enjoyable experience for the player.

And as for the Wii U’s touch screen, we did use that aspect as a foundation when creating the gameplay of The Wonderful 101. The Switch also has a touch screen so that aspect should work just fine. But for the platforms that don’t have touch interface, players can use the right stick instead. Personally, I preferred using the stick input rather than the touch screen on the Wii U. I felt like it was more efficient and well optimized.

Kamiya: Yeah, it was faster, right?

Moving back to the crowd-funding aspect, what lead to this decision in order to self-publish the game? And have the stretch goals been defined?

Inaba: Firstly, I want to say that I think PlatinumGames has this reputation for being well-known and a high quality company that really knows their stuff. We’re really grateful for that reputation, but the honest truth is we’re just developers over here; we can’t publish games by ourselves. There’s a lot of means that we don’t have like the capital and resources to get things like that done. And now that Nintendo’s kindness has allowed us to expand to other platforms, we want to do this on our own. We feel like we’re a company that has a great relationship with players, and we’re proud of this intimate relationship we have with fans of our games. So when considering what to do to publish the game, we thought, “Let’s work directly with players to make this happen.” Kickstarter just made the most sense for what we want to achieve.

As for the goals, we’ve got the Switch version and then the other platforms decided, but other stretch goals aren’t defined yet. Though we’ve certainly talked internally on wanting to add or change things here and there since we’ve got this great opportunity. Future goals won’t be decided until the previous ones are met.

We’ve seen some Kickstarters before where they’ve offered too many goals because the campaign was too successful. And eventually it became a big problem for them post-campaign. Are you worried at all about this campaign becoming too successful?

Inaba: Honestly, if it’s so successful that we have so much more to do, we’d be completely happy just like the fans would be.

Kamiya: What other campaigns do you mean?

Inaba: They had a lot of platforms they were trying to release on, right? We’re not going to make any promises that we can’t fulfill – we don’t want to invite any problems. This is a project where both the fans and Platinum are going to be excited to revisit this IP, and we’re not going to betray that excitement by doing our fans wrong.