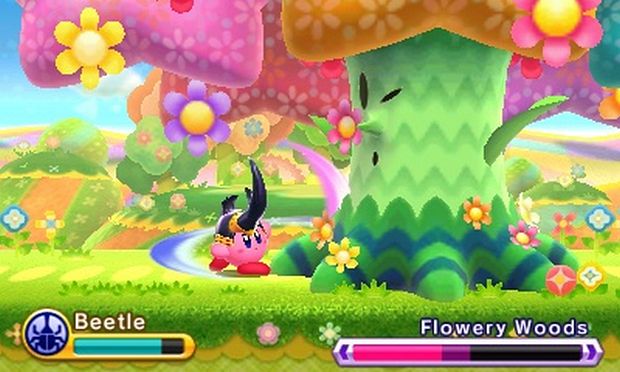 CVG has put up a new interview with Kirby Triple Deluxe director Shinya Kumazaki and Nintendo director Yurie Hattori. As you would expect, most of the discussion pertains to the upcoming 3DS game, but there’s also some interesting comments about HAL’s relationship with Nintendo.

For Shinya and Kumazki’s full comments, head past the break.

Shinya Kumazaki: With Kirby Triple Deluxe being the first Kirby title on Nintendo 3DS, at the beginning of our development cycle we thought to ourselves, “Well, how can we bring Kirby to this particular system? And how can we use the 3DS features to make this a unique title?”

So we looked at the biggest and most unique feature of the Nintendo 3DS, which is of course the 3D graphic ability itself. So we really were trying to figure out how we could add the 3D functionality and how we could marry that with traditional side-scrolling Kirby action, and still keep it accessible for our audience.

And what we came up with is having the two planes that you mentioned in your questions. Just by adding that to the classic sidescrolling action that we’re seeing in Kirby Triple Deluxe we’ve added depth, originality, and uniqueness while maintaining some of that classic playstyle, and keeping it accessible to folks who maybe might not be comfortable with a different implementation of the 3D feature.

Kumazaki: When we had the Super Inhale from Kirby on Wii, that was sort of a continuation from something we had in previous Kirby titles. For example, we had a variety of that in Kirby and the Amazing Mirror. And while we have had continuous power-ups in Kirby’s inhale ability, they’ve always come with limits; there are things Kirby can’t inhale.

But with Hypernova we really wanted to go back and take a look at the catchphrase we’ve had with Kirby from the beginning, which is “Kirby can inhale anything.” You would see in some of the marketing images Kirby inhaling a city itself, or Kirby inhaling a giant TV screen.

However, in the games themselves, in accordance with what the system would allow, it just wasn’t possible for us to actually have Kirby inhale anything. But we decided this time we’re going to go ahead and throw out those limits, and we were able to say, yeah, this time Kirby really is going to be able to inhale anything.

Because we have taken that catch phrase at face value and made it so that Kirby can actually accomplish what he says he can, you’re going to see some really over the top surprises and a lot of moments where the player will just sit back and go, “Oh my gosh, I can’t believe he just inhaled that thing.”

The hypernova has allowed us to implement a technique or feature that we think is going to make the gamers really excited and pleased with what they’re seeing on screen.

Kumazaki: Paying attention to ease of play in the beginning and then the sudden increase in tension in the later half of the game, that is a philosophy we have kept in mind when we creating all the Kirby titles.

At the beginning you have a wide open gate so the game is accessible to players of all skill levels and ages and interests. And then as the game progresses, the player is moving through stages that become incrementally more difficult, they’re battling bigger bosses as they go on. As they’re learning the controls and having a good time, they are actually growing within the game, and the game sort of grows with them to match their increased comfort level with the game.

It’s not just about the difficulty level and the types of enemies they’re facing, but it’s also just the feel of the game world itself. In the beginning stages there are blue skies, it’s sunny, and you’ve got birds singing in the background. It’s very light and fun and you want to go and hang out in that world.

And you, again, are growing and changing with the game itself. So even though it’s one continuous game, we really feel that from beginning to end the game changes and the player is swept up in that change, and the player grows along with their progress through the game. I think that’s something we try to do in all of our Kirby games, and even moreso here than we did on the Wii. I think we may have accomplished that to a greater degree on this title for Nintendo 3DS.

On why side content is such a big part of Kirby…

Kumazaki: One of the main things we try to keep constant in our Kirby development is that we want to create a game that appeals to users of all levels. So it’s not just the main game, it’s that extra content that allows us to do that.

Even if the main game, as we described earlier, starts fairly simple and progresses and grows with the player from beginning to end, we think some of this extra content with extra difficulty levels and different control schemes adds even more experience for the player.

That’s really why we add that extra content. We feel that there are some players out there who want to see more of what Kirby can do and what the other characters can do outside of the main action game.

So, for example, with Dedede’s Drum Dash, we have a different control scheme. We’re only using left and right on the Control Pad, plus a single button. So that’s a new style of gameplay, and there are some rhythm elements there as well.

With Kirby fighters, we’re bringing in four-player multiplayer, which obviously you’re not getting in the main game. So really what we’re trying to do is add experiences that the player doesn’t get just from the main game; things that maybe we would like to add but because of the nature of the main game, we move over to this extra content.

The whole reason behind that is we want Kirby to appeal a really wide audience. So we have the main game plus this extra content, just to give Kirby a lot of variety and make it so lots of people want to play and enjoy playing Kirby titles, including Kirby Triple Deluxe.

Kumazaki: Yes! For the first time we are having Kirby fighting Kirby. And we had to really take a look at a lot of our preconceived notions on what the copy abilities were. We discovered a lot of things in doing that process.

Previously our copy abilities were used for navigating and clearing maps. But this time, now we have to go back and take a look at them in relation to fighting and decide which abilities actually work in which type of gameplay.

For example, we dropped some of the abilities that were really only suited for map navigation and clearing levels, like Stone. Again, we just said, “Hey, this is good on the map level, but it’s not a great fighting copy ability.”

And it was tough balancing the powers and adjusting the difficulty level. But we think because of the different copy abilities we chose for Kirby Fighters, we have added a new appeal to Kirby himself.

It’s still Kirby, but with these different abilities he’s a little bit of a different Kirby. And it also added variety to the play style depending on which copy ability the player chooses.

I think by doing this we’ve added just another layer of depth to this title that we hope will appeal to a lot of people.

Yurie Hattori: As players and as developers I think we’ve all thought to ourselves while playing Kirby games, “I wonder which of these abilities is actually the strongest ability?” And I think with Kirby Fighters we’ve given people a chance to go and try out all these different abilities, to finally answer that question.

Of course, it’s really going to depend on which copy ability you feel most comfortable with and which suits your play style the best.

But it’s a question that we asked ourselves and we think players have been talking about. This time we’re able to implement it into this game and hopefully it will be able to answer that question and appeal to lots of different people.

Kumazaki: We’ve been working on Kirby for a long time, of course, and we really treasure this property. Kirby is something that we hold very dear to our hearts. We have our own ideas about what Kirby is, and how Kirby should appear, and what Kirby should do.

But at the same time while we feel like we’re protecting Kirby, we also realize in some ways that’s restricting what Kirby can be and what Kirby might be. And that’s where it’s really nice working with Nintendo, because they come in and they invigorate us and they add a lot of new ideas and help us redefine Kirby. So when we ask ourselves that question Nintendo provides a lot of energy to that discussion.

It’s essential for us to take the rules we’ve created and sometimes throw them out the window and start over and think of new things. And Nintendo helps us when we have to do that and adds new challenges for us to face and overcome, and in that way the series continues to grow.

Hattori: HAL and Nintendo have been working on Kirby for a long time together, and it’s interesting because HAL is within Yamanashi and Nintendo is out in Kyoto. To take a trip to Yamanashi and come back to Kyoto is eight hours, so we really don’t have a lot of face-to-face meetings.

In spite of that, I think we work together really smoothly. Again as Mr. Kumazaki said, there is a lot of trust. We look at what HAL does and we see that they’re creating things with a lot of care, a lot of attention to detail, and they’re really thinking about the customers when they’re going through the development process.

They come up with such high-quality work, so we feel really safe and secure with what they’re doing on their end. And of course, in order for all of us to continue to grow the appeal of Kirby, with every title we work on we have lots and lots of meetings where we sit and throw different ideas about how we can make Kirby more appealing, what we can have Kirby do.

Because we have a relationship of trust and that long history of working together, I think that we’ve done a pretty good job so far and I think that going forward we’re going to continue this process.

I think our relationship will become even stronger, and I really have a lot of confidence that we’re going to be able to continue this and continue to grow Kirby and the overall series.