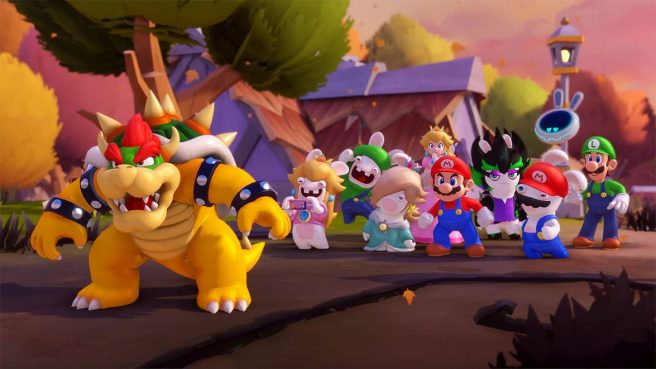 Speaking with Nintendo Everything, Mario + Rabbids Sparks of Hope producer Xavier Manzanares has discussed the origins of the project and how it came to be.

According to Manzanares, the team first sat down around Summer 2018 and discussed what the future could be. Having a follow-up be “surprising” was key, and making it stand out from Mario + Rabbids Kingdom Battle was important in order to move forward. That led to a change in how Sparks of Hope handles battles as well as expanding the scope to allow for more exploration and gameplay features.

“So it started in 2018. Basically we were finishing Donkey Kong Adventure. We were looking into doing some postmortems to see what we did, what was cool, what we added, things that we maybe want to do for the future. But yeah, it was Summer 2018. I was going to Milan at that time and I was visiting the Milan studio, and we were discussing with producer Gian Marco Zanna, creative director Davide Soliani, and myself and we were wondering what the next steps would be.

One thing we started to say at that time was, whatever we want to do, if we want to get a validation from Nintendo and Ubisoft, if we want to do a new Mario + Rabbids game, it needs to be surprising. It couldn’t be the same surprise as we had with Kingdom Battle because in 2017, we came out of nowhere. Nobody expected what we proposed and we couldn’t do that again. Now Kingdom Battle is there, Donkey Kong Adventure is there, the expectations are there, so when we talked about the surprise effect, we thought more about what gameplay change could be something more than a sequel and surprising for the players that tried Kingdom Battle or never tried a tactical game.

So yeah, the first meeting was that summer and then one of the topics that came up right away was the combat system. We didn’t want to do real time and remove the cursor and the grid because players asked for it or because we thought it was the evolution of what we did. We wanted to go there because we thought it would be an easier way to play, but also it would uncover new challenges and people would be surprised.

Then the second topic was discussing with Davide and saying, ‘Hey, players ask for more worlds and having more things to do in the world.’ So we said, ‘Okay, let’s do planets.’ We didn’t think about the space opera yet. We were thinking about planets, but didn’t know at that time that it would be in space. So we said, ‘Okay, let’s say planets. You arrive on the planet and you can do whatever you want. You can go left, right, whatever.’ Then we came up with the quest system. So we said, ‘Let’s add an RPG element to the mix.’ So main quest, side quests, levels.

Exploration was the second topic that we put on the table in 2018 that we worked a lot on. For example, you touch an enemy, you go directly in battle, which is a big change compared to Kingdom Battle or Donkey Kong Adventure. You could see the battlefield from afar. The reason why we wanted to do that is first of all it was different, and second of all it was giving us more opportunities to be creative in battle because the size of the battle could be whatever we wanted – it’s Cursa’s dimension, so we thought, ‘Hey, this could be cool.’”

Mario + Rabbids Sparks of Hope is due out for Switch on October 20, 2022. We’ll have more from our interview with Manzanares soon.