Nintendo artists on making images for Zelda: Breath of the Wild, bow importance

We’ll be seeing The Legend of Zelda: Art & Artifacts in English next February. However, in Japan, it came out last month as Hyrule Graphics.

Much of the book features various images from the Zelda games, ranging from character concept art to official illustrations. Towards the end though, there’s an interview with several Nintendo artists who have worked on the games – starting with the original up through Breath of the Wild.

The Breath of the Wild segment isn’t too long, but we went ahead and translated it since the section was interesting enough. It reveals Takumi Wada, who last contributed to Skyward Sword, as the person leading the way on drawing artwork, and Satoru Takizawa as the art director. There’s some talk about how important the bow is as well, with producer Eiji Aonuma stressing this early on in development. We also get a bit of a look at some variations that were drawn of the art where Link is shooting an arrow.

Q: So lastly, I’ll ask about Breath of the Wild. Also this time [Takumi] Wada-san was responsible for artwork, right?

Yusuke Nakano (Nintendo illustrator): Right. The plan was to appoint Wada from the start. It follows naturally from Skyward Sword, so there was no other choice than Wada.

Q: Wada-san, how did you feel when you were appointed?

Wada: Like “Whoopee!” But to tell the truth, I was even personally expecting it (laughs).

Q: It was your second title, so you weren’t anxious, right?

Wada: No no, that’s not it. The trailer for Breath of the Wild was published during E3 2014 for the first time, but when I saw it, I thought “Wouldn’t it be okay even if I didn’t draw pictures?”

Q: Ah, the game screen is as beautiful as an illustration, so you thought that it wasn’t necessary for you to draw pictures (laughs).

Wada: That’s right. When I originally saw that video, I completely thought that it was a picture behind Aonuma. However, when you look closely, “Isn’t it moving!” (laughs)

Wada: However, since the graphics of this title target picture-style, I thought that I had to draw things that exceed it, so the pressure was quite high.

Q: What kind of picture did you draw first while you were under that pressure?

Wada: It was a picture of Link shooting an arrow with a bow. I tried drawing three variations that have the same form but a different touch.

Q: Which one did you choose in the end?

Wada: I decided on picking the best of both a rough picture and a clear surface style. 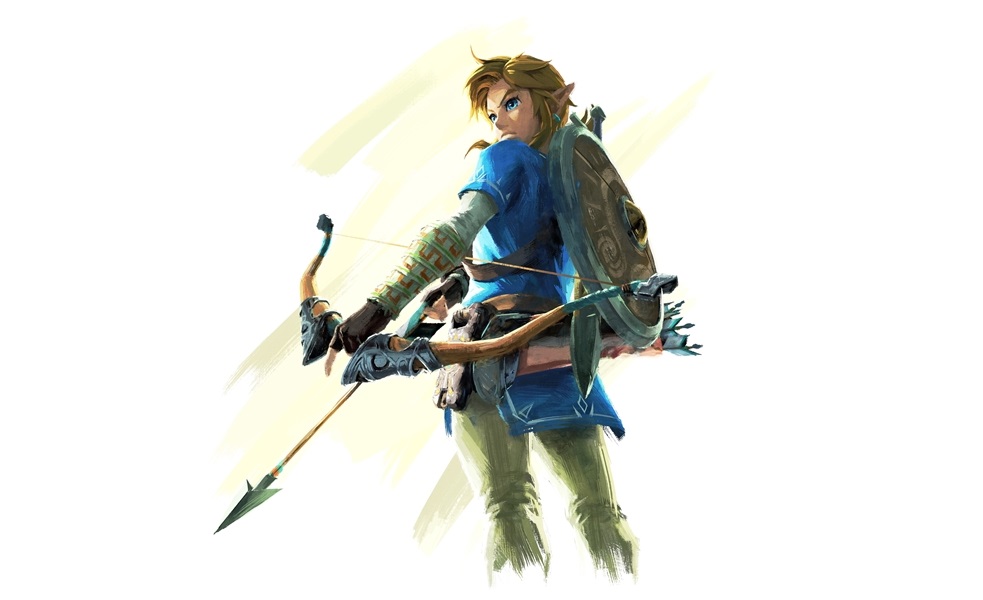 Q. This picture of Link from behind is also a composition that we haven’t seen much before.

Wada: When it comes to each pose, I drew them while discussing with art director [Satoru] Takizawa, but I thought that drawing the backside would show the various equipment that is held on the back and seeing them would make everyone excited.

Q: The shield isn’t the regular one and various things are also hanging on the waist… Also, there isn’t a sword but rather a bow in these two sheets.

Takizawa: The bow is very important item this time around. You can use it from the start, it is also very convenient to use, and it was even used symbolically in the 2014 promotional video. Producer [Eiji] Aonuma has been screaming “I want to endorse the bow” from the initial stages of development (laughs), so we decided easily on the direction of making the bow appealing.

Q: This time the color of clothing is also different and the familiar hat isn’t worn.

Takizawa: Not having Link’s iconic green clothes and triangular hat in the main illustration was a brave decision. But the concept that Link changes various clothes in this title was decided from the start, so this design first and foremost set about to show symbolically that “it is different every time”. However, there are also various types of swords, bows, shields and other arms, so it was hard to decide which equipment to use for the official illustration.

Q: In other words, you can also catch a glimpse of “revisiting the conventions of Zelda”, which is one development theme of this title, from the illustrations, right?