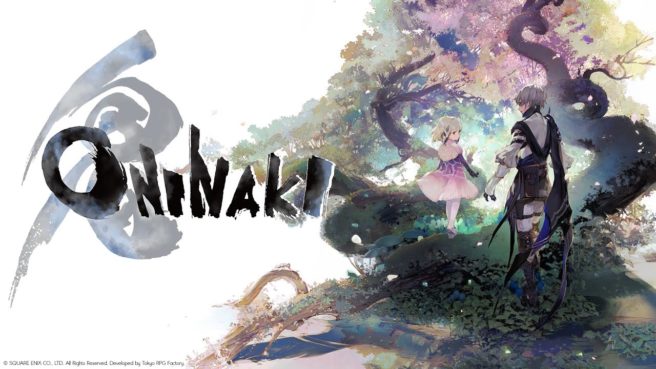 After it was unveiled during last week’s Nintendo Direct, Japanese magazine Famitsu caught up with a few of the developers working on Oninaki. This includes director Atsushi Hashimoto, producer Ryutaro Sasaki, and creative producer Tokita Takashi. The three discussed how Tokita (who is the director of Chrono Trigger) became involved and what he has contributed, the game’s origins and characters, and why it’s an action RPG.

We’ve prepared a full translation of the interview with Hashimoto, Sasaki, and Takashi. Continue on below to read it in full.

Could you tell us why Tokita and Sakaki were included in the team this time around?

Tokita: When Tokyo RPG Factory started and I heard they were making a new series of classical RPGs, I thought: “Well, well, sounds like you guys are getting into something interesting.” For a long time we worked together on some of the stuff for Chrono Trigger and also consulted on other projects, but I thought this time I would properly meddle in their plans! (laughs)

Sakaki: Unlike Tokita, I was roped in to help out on both Lost Sphear and I am Setsuna. But that was only ever in a supporting role. This time around, though, many more of my ideas were being included and we decided I’d work closely with the development team.

Hashimoto: For me personally having more people there to consult is a huge benefit. Plus having Tokita come in really stimulated the whole development team. For our generation Tokita is like a ‘magazine person’.

Tokita: Don’t compare me to something so outdated! (laughs)

Hashimoto: Being able to make an RPG with a famous game designer you can see on the covers of magazines like Tokita and being able to ask his advice directly is something all of us appreciate.

What sort of advice did you give to the staff, Mr. Tokita?

Hashimoto: When we sat down with the scenario writer Inaba (Hirotaka Inaba), the two of us were always saying, “Can we make this a little harsher?” and there were times he would be surprised and say: “Are you sure it’s OK to push it that far?”

Sasaki: He told us that he was worried that the game might get a CERO Z rating (18 and over).

Tokita: Traditional games didn’t have the expressive power that they do today, so those more serious episodes just didn’t feel all that real. But sometimes the player could bring those images to life with their imagination and those sorts of mental pictures stayed with them. Because nowadays it’s not like we are trying to express everything through images – we can go ahead and keep making more and more of those impactful episodes. For sure what we really want to create is a work that will emotionally affect the player and also stay with them afterwards.

How did you come up with the idea of travelling between the worlds of the dead and the living?

Hashimoto: This is our third game and the idea actually came from us joking about a game where you pass between the worlds of Lost Sphere and I am Setsuna. While we were honing down that idea, those two worlds became the living and the dead.

Sasaki: I think the exchanging worlds system suits those worlds of the living and the dead really well. We decided in the living world everything would be colorful to evoke life, while in the land of the dead, or ‘The Beyond’ as it is called in the game, there is a blue hue to evoke darkness and cold. The game then developed with that kind of contrasting theme.

The atmosphere of this game is definitely different from the other games, including the title (the original Japanese title translates as: Land of Weeping Demons).

Sasaki: I think the title really captures the heart of the game… (laughs) Actually, when we were talking about potential titles, Inaba suddenly shouted, “Aah, that’s it!” So we just kind of went with that one.

Tokita: Once the name was decided on and the concept became clear, it was like the story just came flowing out from there.

Hashimoto: The keyword for this game is ‘Demon’, so the title was also kind of decided by that.

Why did you go with ‘Land’ instead of country?

Sasaki: This game isn’t an epic adventure to save the world; we created it to be something with a much more intimate scope, like a rich folk tale.

Hashimoto: Inaba also asked, as we already saved the world in Lost Sphear, if we could have a smaller scale like in the game Vagrant Story.

Sasaki: Just to mention, the logo for this game was designed by Tomonori Kogawa.

Tokita: He was the one who drew the characters for Space Runaway Ideon and Aura Battler Dunbine. He is very skilled at brushwork and I thought he would be perfect for the project, so I asked him.

Sasaki: He was like, “You’re asking me to just write some words?” But he did them happily.

Tokita: What we asked him for were words, but from a design perspective what he gave us was more like an illustration.

As with the game title, is there any hidden meaning in the protagonist’s name, Kagachi?

Hashimoto: Kagachi is a flower used during the Japanese festival of reverence to the dead, Obon. It can also sometimes be called Hoozuki. But the word also has the ulterior meaning of snake. According to legends, the snake rules over life and death.

Sasaki: If you write Hoozuki with the original characters, the symbol for demon is also in there.

In the trailers there is also a young girl and a black knight alongside Kagachi. Who are they?

Sasaki: That young girl is a key character in the game. Basically the story focuses on her and Kagachi as the game advances. The knight who attacks Kagachi, on the other hand, is to put it simply his rival. But you’ll have to wait until next time to hear more about that…

Could you tell us about the game being an action RPG genre this time around?

Hashimoto: Originally the game was designed with the idea of the main character being alone. There was even a picture from Dragon Quest 1 in the original proposal! We had that idea of being alone and there also being a class system, etc….

Sasaki: And I said if that’s the case, why don’t we make it an action RPG?

Hashimoto: Within the team too there were originally calls for the game to be an action RPG, so rather than it just being a case of Sasaki having the final say, it had backing elsewhere. The truth is that while working on both Lost Spear and I am Setsuna, I was making systems that calculate the area effect of skills and the deciding factors in battle so that I would be able one day to make an action RPG.

Tokita: Wow! This guy can do everything… (laughs)

Were you intending for it to be the third game?

Hashimoto: No, that’s just a coincidence. (laughs) It was just so that when I did take on the challenge of making an action RPG, the systems and skills would already be there so that I wasn’t starting from zero.

Sasaki: Within the Tokyo RPG Factory team there are also a lot of people who have experience working at different companies and also working on action RPGs, so the players should have high expectations!

Could you tell us more about the new class system?

Sasaki: There are characters called the Lost in the game who function as the class system. Even during battle you can change classes real-time, changing your weapons and skills with that, in a system that is unique to this game.

What makes the Lost class system different to other similar systems in games up until now?

Hashimoto: I think the fact that the player fights alongside the Lost. In other games when a character uses a skill it is the character themselves that produces it, but in this game the protagonist releases the Lost in order to fight alongside them.

Tokita: If the enemy attacks from both sides you can also fight back to back to clear out the enemies…

Hashimoto: Even though you’re playing alone, I think having the Lost there gives the feeling of working alongside someone else.

What are the different types of Lost?

Sasaki: I can’t say anything about that yet, but there will be plenty of them. You can look forward to seeing them all!

Finally what would you most like players to be excited for in Oninaki?

Hashimoto: Even though it’s an action RPG, I think it’s still a very story-driven game. That’s something Tokyo RPG Factory have been really keen on since I am Setsuna, so I think the fans can look forward to that. It’s also possible to choose the difficulty, so even those who are not good at action games should be able to enjoy this title. Even if you’re not usually a fan of this genre, don’t worry!

Sasaki: Just as Hashimoto said, there are going to be a lot of surprises in the story, so look forward to that! I think the way the player can change their skills and weapons in real time to suit the situation is very fluid and well-done. There are also plenty of new systems that we haven’t mentioned yet, so please look forward to those coming later.

Tokita: We have taken great care to build the emotional impact and mood shifts that are distinctive to this game. I’d like players to look forward to feeling that emotional impact while they play. This is where development really starts to get interesting… (laughs)