– The first name Rayfa comes from Rei (Spirit) in Reiryoku (Spiritual power).
– The story setting is that only the royal family in Khura’in have middle names. Her middle name Padma means Lotus Flower in Sanskrit. They use this because the setting in Khura’in is that Lotus Flower is the symbol for its shrine maidens.

– Rayfa’s position in this game is as an enemy heroine, a special position which is unheard of in the series.
– The idea of an enemy heroine came about before creating the Divination Seance. Fuse wanted to make a new heroine character, then the idea about making an enemy heroine came from Fuse himself. He wanted to make a girl as the story key character. Her looks were decided on at about the same time as features like Divination Seance.
– At first the decided keyword for such a character was Shrine Maiden. But if that’s the only keyword, they felt she wouldn’t deliver a pack of punches. That’s when the “princess” keyword was added, so she finally became the Shrine Maiden Princess of Khura’in.

– After deciding on the above point, they worked on her character story-wise. Since she’s a heroine from the opposing site, Phoenix got to see her as a person from a foreign land called Khura’in Kingdom. Moreover, since she’s the Shrine Maiden Princess, that means she’s royalty with a strong position, with some authority. And they determined Rayfa’s design direction from that. 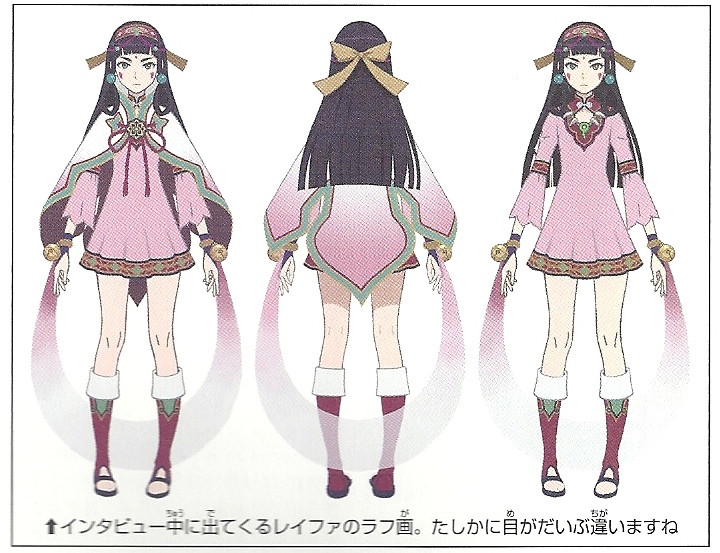 – The page has a rough design of Rayfa when they just started adding the princess keyword to her and the design started to finalize.
– Eshiro remembered telling Fuse to ‘change her eye’, which became totally different in the final version, because he felt this eye was too cold. Even if she’s an opposing heroine, if she were too antagonistic the player wouldn’t be able to raise their tension, so she did need to have a bit of a cuteness factor.
– Fuse admitted that this rough design was based on him thinking of total antagonism. Then Eshiro gave feedback to make her more flat towards heroine-like. Eshiro said that if there’s a strong will shown inside her cuteness, she can be seen in the enemy side. That’s how her eye size and position were changed from the rough to final version. It was very hectic to keep the balance, since they even also had to consider her hair.

– For Rayfa’s way of speaking, since she’s not only a princess, but also has a higher position than the judge, they made her with such tone, such as saying harsh words to Nick. When thinking like that, Yamazaki joked that it’s like seeing Nick getting scolded by a cute girl.

– The interviewer also laughed at how there’s a granny character who showed up in the demo, putting off Rayfa’s upper clothes. Yamazaki remembered how hectic it was to simply create her, and they even had to remake her almost from scratch again.
– Fuse said that it’s a 2D-like presentation using 3D models, so they had a hard time explaining the delicate nuances like tempo to the staff.
– Everyone hopes that Rayfa can become popular. Fuse is glad that people’s reactions to Rayfa in the demo were better than expected, but Yamazaki reminds them only one side is shown from Rayfa in the demo, so Fuse looks forward to the reactions from people after playing the full game.