– Everybody notices the floating cloth behind him. Ema calls him the ‘Airy Prosecutor’, but when the interviewer wondered if everyone in Khura’in could make clothes airy, Yamazaki said that’s not the case. It’s a special skill from Nayuta, perhaps somehow related to the power of Buddhism too.

– When creating a rival prosecutor, the important thing was to make him ‘look so strong’. The previous one (Dual Destinies’ Simon Blackquill) had ‘prisoner’ as a symbol, so that he made people feel “A prisoner as a prosecutor sounds dangerous”. This time, the symbol for the rival prosecutor would be “An existence that transcends human intellect”, and they would also put an emphasis on his strength.
– Since they already decided on a setting in a foreign country (Khura’in Kingdom), the prosecutor needed to become an international prosecutor that can go between the home country and foreign country. With that in mind, they tried to combine a strong prosecutor with an Asian taste, and they arrived at the concept of being strong from being raised by a God. He can even see through the flow of cause and effect in trials. 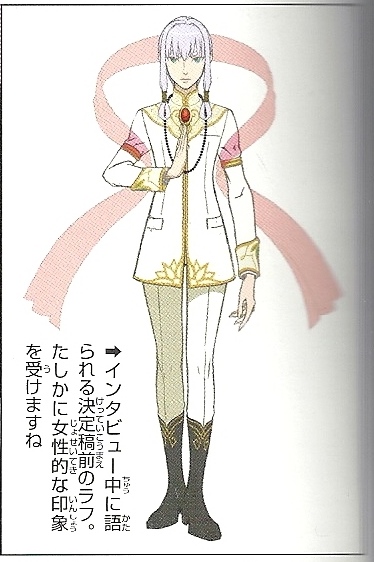 – Yamazaki wanted to make him feel like (Journey to the East’s) Sun Wukong dancing on Buddha’s palm, so that’s why the fluttering [cloth] should portray his strength.
– At first Fuse wanted to make his gender ambiguous like Priest Sanzang (also from Journey to the East), and have neutrality like Buddha. The page has a rough design for an idea of a feminine look for him. However, Eshiro told him to ‘make him more masculine’, so Fuse revised his design.
– When asked about making the design more masculine, Eshiro said that when comparing this rough design to the ‘Strong Prosecutor’ keyword, this one ‘didn’t look strong’ at all. The rough design had some cuteness but no sense of coercion. After Eshiro told Fuse to make him more like a male, Fuse made something that’s very close to the final design. When Eshiro was given an explanation that ‘this character has a kind tone but totally looks down on criminals’, he believed that would work well, and he gave an OK.
– The next piece of feedback he gave were ‘How would you show that?’ and ‘How would you like the users to feel it?’. Yamazaki also chimed in and judged that ‘He didn’t really feel it’ [with the design at that time].
– The interviewer remembered the prior discussion of Sun Wukong, and wondered something about a move of Nayuta’s in the game. That’s when Yamazaki and Eshiro were surprised as if they’ve been found out. Eshiro said that should make sense on how he could make the cloth airy. (To clarify, this should be the thing that Fuse had to fix into the final design)

– Discussing his decisive quote “Satra”, it came from Yamazaki. From the start Nayuta’s character concept was the “Abandoning Prosecutor”, so he said things like “You are guilty so please give up” or “Please be enlightened” to the accused. The latter one is ‘Satorinasai’ in Japanese. The more imperative version ‘Satore!’ (Be enlightened!) seems more decisive, and that’s where Yamazaki came up with ‘Satora!’ (TN: can be romanized to Satra!).
– After saying Satra, Nayuta also chants some sort of spell, which has some meaning. Yamazaki leaves it to the player to think about what the meaning could be. The meaning should be related to ‘Please be enlightened’.
– The spell actually comes from Japanese language too, and also has voice. Nayuta’s voice actor had some difficulty voicing it though.

– Other than the spell, there is also a hand gesture following it. Nobody can replicate the gesture, not even Fuse as the move is too quick for even him.
– Fuse wanted to do the swift hand gesture from the start. The concept is that it cannot be caught by eye, so he didn’t point out each poses on detail. While the team members were making it, the finger gestures were naturally decided with the poses. That was why not even Fuse could replicate the move.

– On Nayuta’s name origin, there were a lot of ideas for it, but the name Nayuta had been there from the early phases, and they even already used Nayuta for his tentative name. Ultimately that name (Nayuta) had both unfathomed and divine feels so they decided on that.
– Another point is that they also want the name to have a feel of not having a nationality. It sounds both Japanese-like and Asian-like at the same time. People may get a familiar feeling hearing that name, yet there’s also a feeling that it’s foreign as well.