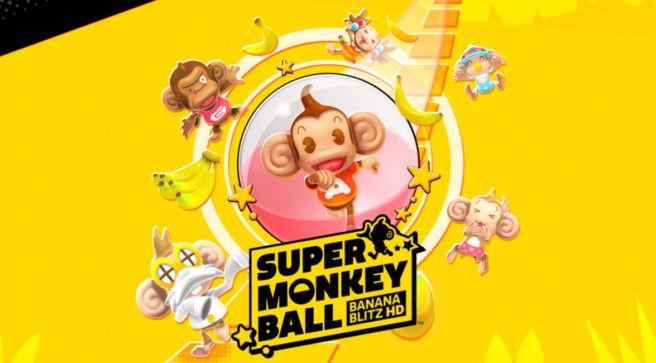 “I was totally addicted to this game when I was younger, so I’m putting in a ton of Easter eggs and details!”

The recent announcement of Super Monkey Ball: Banana Blitz HD marks the series’ return to home consoles since 9 years. To commemorate remaking the game for current-gen consoles, the latest issue of Famitsu features an interview with two key members of the team, Toshihiro Nagoshi and Masao Shirosaki. The interview discusses how development has been coming along, the series’ history, what makes the games so attractive, and new features that are being added to the remake.

Please tell us about your roles in this project.

Nagoshi: I don’t have any concrete role, per say, but I’m somewhat of a supervisor on the game.

Shirosaki: I’m serving as both producer and director. We’ve been talking about making Super Monkey Ball for the current gen for a while now, but we were never able to make things work in terms of the team, so the idea ended up being shelved for a while. With that said, after I finished up development on Judgment I was pondering what to work on next, and when I heard talks of remaking this game, I absolutely had to step up and be a part of it!

And that’s how they ended up choosing you to be the producer and the director, huh? Mr. Nagoshi, what did you think when you heard this from Mr. Shirosaki?

Nagoshi: When I heard that Shirosaki stepped forward, I was honestly relieved because I knew I could rely on him. Since this is a remake of a game that originally released a while back, things like the target audience and style of gameplay were already established; development-wise, it’s easier than starting from scratch. Shirosaki has always been someone who has worked on a variety of games, regardless of the genre, and even though he’s one of the younger ones in our office, he’s got a lot of experience under his belt – he really knows how to make a good game.

It probably goes without saying, but there must’ve been some really grueling work involved with serving as both producer and director, right?

Shirosaki: You got that right! (laughs) I’ve been working in game development since a young age so even if my position on a project changes, what I end up doing never does. For example, on this project I get to make the big decisions on how things take shape, and I get to see that product reach our consumers. So while I really get to experience just how fulfilling the whole process is, I also end up feeling absolutely terrified. With being a producer on a project, you must have a very tight hold on things like budget and time management; on the other hand as a director, I have thoughts like, “If we had more budget and more time, we could make what’s great even greater!” So I feel like there’s two totally different people in my head at all times – I’m basically at odds with myself every day.

Wow, that sounds like it can be quite stressful. How do you make a final decision on things when you’re in that situation?

Shirosaki: I’m naturally the kind of person who listens to opinions of those around me, so I’m always thinking about how I can reach a mutual compromise while I’m discussing with programmers and designers on how they feel about budget, schedule, etc. This time around the scope of our development staff was pretty small, so sitting down with everyone to hash things out all went smoothly.

That’s very interesting. Now before we get further into Banana Blitz HD, we would like to ask Mr. Nagoshi about the very first game in the series, Monkey Ball. Since you’ve been involved with the series for so many years, could you share some kind of behind-the-scenes story from back then?

Nagoshi: So the first game wasn’t for home consoles, it was for arcades. And this hasn’t happened much in recent memory, but back then the cost of development would rise suddenly. So I think this was at a sort of transitional period [in gaming] where even the arcades wanted to diversify the kinds of games and players they had. So we were trying to make a game at that time that would appeal to everyone, but we were having trouble getting things off the ground. Because of that situation, we set out to create a game that was extremely easy to play, and extremely cheap to develop. And that ended up becoming the arcade game Monkey Ball.

Why do you use the word “extremely”?

Nagoshi: I figure, if you’re going to do something, do it to the extremes. And in pursuing that, we considered how to make gameplay that was incredibly easy to get across – something that the consumer could play without even needing to read an instruction manual. And then the reason for keeping development costs extremely low was so the sales could be substantiated. We turned it into a home console game after that, but I never thought it would blow up in popularity overseas like it did. I’d say the gameplay was attractive to players regardless of age or gender – it wasn’t a game that picked favorites, so to speak. We now know why it was such a hit overseas thanks to feedback, but it was never our intention to achieve that kind of success. It was totally incidental.

Why do you think so many fans continue to love this series with such passion after all these years?

Nagoshi: I may have been the one who put the wheels in motion in the very beginning, but the staff that have been involved with the games thus far each have their own interpretation on what makes Monkey Ball great, and I think we’ve had such strong success with these titles as a direct result to that. In other words, I think the reason fans have loved the series for so long is because we decided not to brand Monkey Ball as any specific kind of game.